The Crushing Burden of Rape 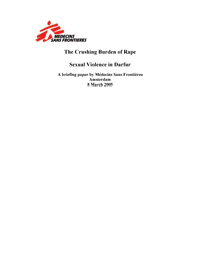 Since early 2003, the people of Darfur have endured a vicious campaign of violence, which has forced almost 2 million people to flee from their destroyed villages in search of safety. Rape against women, children, and men has sadly been a constant factor in this violence throughout this campaign of terror. More tragically, it continues to this day even long after people have fled from their villages. The stories of rape survivors give a horrific illustration of the daily reality of people in Darfur and especially of women and young girls, the primary victims of this form of violence. It has to stop.

MSF teams have been assisting people fleeing their villages since 2003 in Darfur and in neighboring Chad. These first waves of people in flight repeatedly recounted to our teams how armed militias attacked their villages, killing and raping the inhabitants. The hundreds of thousands who fled the destroyed villages have now sought refuge in makeshift camps with little but rags and sticks as shelter. But they have found no safety there.

In spite of high-profile visits of the world’s leaders, people still face persecution and intimidation inside the camps. Rape, a feature of the attacks on their villages, has now followed them insidiously into their places of refuge. Families, in order to sustain themselves, have to continue collecting wood, fetching water or working their fields. In doing so, women have to make a terrible choice, putting themselves or their children at risk of rape, beatings or death as soon as they are outside the camps, towns or villages. Rape has serious consequences for the victim’s health and well-being, especially without adequate access to health care and general proper attention.

Between October 2004 and the first half of February 2005, doctors from Doctors Without Borders/Médecins Sans Frontières (MSF) treated almost 500 rape victims in numerous locations in South and West Darfur. Given the great sense of shame, humiliation and fear felt by victims of sexual violence, a sense which discourages them from going to a health facility to receive treatment, MSF strongly believes that the numbers recorded are only a partial representation of the real number of victims.