Dadaab: Leaders Must Not Fail Refugees in the World's Largest Camp

MSF calls for the plight of the nearly half a million Somali refugees currently living in Kenya's Dadaab camp to be added to the agenda at the annual meeting of the executive committee of the UNHCR. 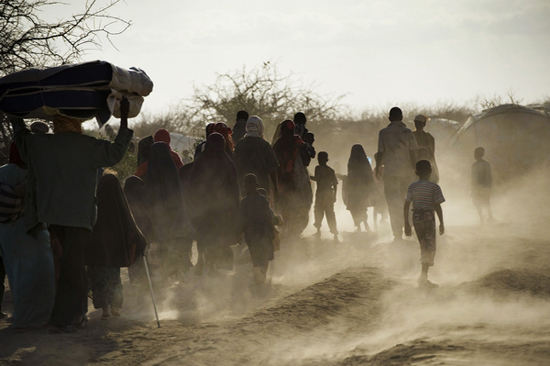 Somali refugees in Dadaab arrive in Ifo 2 camp after being moved by officials from the outskirts of Dagahaley camp.

GENEVA, OCTOBER 1, 2012—As government leaders gather this week in Geneva for the annual meeting of the executive committee of the United Nations High Commissioner for Refugees (UNHCR), the plight of nearly half a million Somalis living in extreme conditions and under fear in camps in Kenya must be on the agenda, the international medical humanitarian organization Doctors Without Borders/Médecins Sans Frontières (MSF) said today.

State parties to the Refugee Convention should fully engage with the government of Kenya and UNHCR so they fulfill their responsibilities towards the refugee population in Dadaab, a sprawling camp complex located in a vast desert landscape in eastern Kenya, roughly 90 kilometers from the Somali border. Drastic measures to improve their protection and assistance must be implemented now, especially with the emergence of cholera and an outbreak of hepatitis E in the camp.

“We are seriously questioning the overall level of assistance provided to the refugees,” said Bruno Jochum, MSF general director, who visited Dadaab’s Dagahaley camp last week. “With security conditions worsening, basic services and the provision of aid have been significantly reduced, so it is no surprise that refugees are yet again facing disease outbreaks.”

MSF calls for the immediate resumption of registrations of newly-arrived refugees and for the implementation of policies to guarantee their protection. Urgent steps must also be taken to meet the basic needs of the refugees, particularly shelter and sanitation.

Since last year, international funding for the camps has been cut by more than 40 percent, while the refugee population has continued to grow. With the rainy season about to begin, there is an alarming lack of shelter and sanitation infrastructure. The temporary assistance being provided is clearly not enough, and it is only a matter of time before a new major humanitarian crisis again hits the camps.

While there has been a relative improvement in the security situation over the past months in Dadaab, refugees still face high levels of violence inside the camps. The activities of humanitarian aid organizations, including MSF, have also become heavily constrained in the wake of attacks against them. Following a security incident in July, in which aid workers were targeted, it has been impossible for MSF’s international staff to continue working on a permanent basis in the camp. The capacity to properly respond to acute health emergencies has therefore eroded.

Newly arriving refugees are also not being registered.

“The fact that newly arrived refugees are not being registered is simply unacceptable, and it is a clear violation of refugee conventions and international treaties,” said Jochum. “We encourage the ongoing discussions to resolve this critical issue between the Government of Kenya and UNHCR. Registrations must be swiftly resumed.”

Additionally, while Somalia remains embroiled in armed conflict, calls for the repatriation of refugees are grossly premature. Security conditions on the ground do not allow for adequate protection or the secure delivery of humanitarian aid.

MSF operates a 200-bed hospital in Dagahaley, one of five camps making up the Dadaab complex. The hospital provides adult, pediatric, and maternity care, as well as surgery and treatment for HIV/AIDS and tuberculosis. Medical staff carry out an average of 14,000 medical consultations each month and admit 1,000 patients from the refugee and host communities. There are currently more than 400 severely malnourished children enrolled in MSF’s nutrition program. MSF also runs four health posts in Dagahaley, providing basic health care including antenatal care, vaccinations, and mental health care.

In October 2011 two MSF aid workers, Montserrat Serra and Blanca Thiebaut, were abducted in the Dadaab refugee camp while providing emergency assistance for the Somali population. They remain in captivity in Somalia, where MSF is continuing to respond to acute crises, but has been forced to suspend the opening of any non-emergency projects until their release.