Darfur: "After a Decade of Fighting There Are Still Medical Needs" 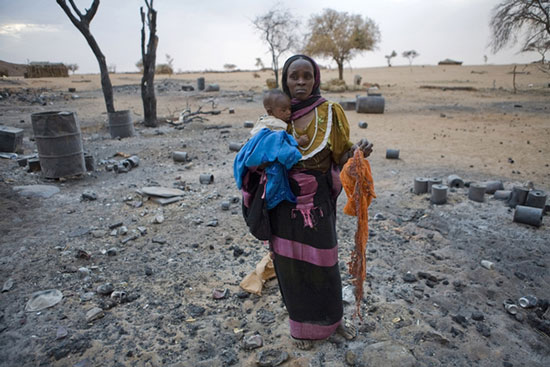 A mother and child survey the wreckage of a market destroyed in a bombing attack in North Darfur.

Tribal clashes over the ownership of a gold mine have already forced nearly 100,000 people from their homes in the Jebel Amir region of Sudan’s North Darfur this year. A decade has passed since the Darfur conflict began, and there are still dire medical needs in the region. Despite efforts to provide medical humanitarian aid to the people of Darfur, there is still more work to do, says Fernando Medina, Doctors Without Borders/Médecins Sans Frontières (MSF) head of mission in Sudan.

What is the situation in Jebel Amir now?

The conflict erupted due to a dispute between two tribes over the ownership of a gold mine that is very important to the economy of the area. This rapidly triggered violent clashes. Estimates of the number of dead and injured vary, but there are reports of 100,000 people who were forced to flee their homes and are now scattered across several locations. The largest group—about 65,000 people—is in El Seraif, where MSF is carrying out medical and humanitarian activities for this population. The internally displaced people (IDPs) are in addition to the local population of about 50,000 people.

Are any other aid organisations working in the area?

Right now, we are the only international medical humanitarian organization in the area. Two national organizations working here had to temporarily bring their activities to a halt due to the increase in violence.

How has MSF responded to the outbreak of violence?

Firstly we sent a team to assess the needs of the population in several areas where the displaced had gathered. We detected the most acute needs in El Seraif. Even though there is a hospital there, the massive flow of displaced people has overwhelmed its capacity. So our idea was to set up a basic health care program and mobile clinics.

Is this population safe from violence?

The most recent clashes between the two tribes happened four weeks ago, when the MSF team was in the area preparing the emergency response. The attacks occurred on the outskirts of El Seraif, with the result that many injured people were admitted to the hospital. Our team worked with the medical staff there to provide direct medical care and refer the most serious cases to El Fasher, the capital of North Darfur. All of this took place within 48 hours. About 121 patients were seen. Now the situation has calmed down a little. We also distributed therapeutic food to 9,600 children under five.

Despite all the difficulties, MSF is still working in Darfur. Can you describe MSF’s activities in the region?

As well as working with the Ministry of Health to respond to emergencies such as the one in Jebel Amir, we are currently carrying out regular projects to provide basic health care, mother-and-child health care, vaccinations, et cetera through both fixed and mobile clinics. We have one project in Dar Zaghawa in the north of North Darfur; another is in the area of Tawila, west of El Fasher; and the third project is in Kaguro, a rebel area. In February 2013, we took part in a campaign to vaccinate 100,000 people against yellow fever. This is on top of the 750,000 people we have already vaccinated against yellow fever in the country since the end of last year through a joint campaign with the Ministry of Health.

MSF had to suspend its activities in Kaguro last year because it was unable to guarantee a regular stock of drugs and medical supplies. However, the team was able to return to the area for the vaccination campaign. Are you expecting to be able to resume the project?

The area is hard to access not only because of logistical difficulties, but also because the permits required to send supplies or staff have not been granted. We are hoping to resume activities there, but the difficulty of sending medicines and deploying medical staff remains. Yet I think that discussions with the authorities are on the right track. They seem to be willing, but need time. The recent vaccination campaign is a positive step forward.

After a decade of fighting, what challenges do the people of Darfur face on a medical and a humanitarian level?