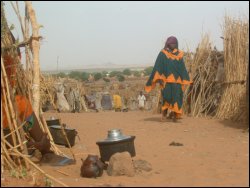 London/New York, July 26, 2004 - Despite the increased political and media attention being given to the crisis in Darfur, Western Sudan, the international medical relief agency, Doctors Without Borders/Médecins Sans Frontières (MSF), says that the desperate condition of the people there is not improving.

MSF's International President, Dr. Rowan Gillies, who has just spent a month working in the clinics and camps in Darfur, said, "What you see there is widespread suffering, inadequate relief efforts and continuing violence." Despite greater access to the area, more agencies and aid workers arriving, the urgent needs are still not being met. "Hardly anyone is getting the care civilians should get in a conflict," said Dr Gillies. "And there are pockets of real disaster, where people are at grave risk of dying in large numbers."

"I am particularly concerned about the food situation," Dr Gillies continued. "For example, in one big camp around El Geneina, only 35% of the displaced people even have a card entitling them to food from the UN. And the last time they received any was at the end of May - over seven weeks ago."

Food deliveries are inadequate and uneven across Darfur. A nutritional survey of four refugee camps in May and June found severe malnutrition rates of between 4.1 and 5.5%. MSF believes that even with the recently improved deliveries from the World Food Programme, only half of the basic needs for food will be met in July. Young children, under the age of five, are particularly vulnerable. MSF is currently treating around 8000 children for malnutrition across Darfur.

Death rates are already significantly above the emergency threshold. This is not surprising as there are extreme shortages of water, food, shelter and latrines, which contribute to high levels of diarrhea among children, a major cause of death.

At the same time there are continuing reports of violence, rape, and intimidation against the population. "I treated women who had been raped and boys who had been beaten when collecting firewood outside the camp perimeter," Dr Gillies said. "We are extremely concerned about reports of relocation of people from the camps back to their villages. This must not be done without the clear informed consent of the people themselves. Many are very frightened and don't want to return."

MSF believes that the current aid effort is insufficient and fears that it will continue to fall significantly short of the needs in the coming months. Urgent action is still overdue, as it has been throughout Darfur's man-made emergency.

MSF has been working to help the victims of violence and displacement in Darfur since February 2003. At present nearly 150 international staff are working alongside more than 2,000 national staff in 17 locations around Darfur.