A Day in Dadaab

MSF is still very concerned about the situation in one of the world’s most congested camp complexes, located in Dadaab, in northeast Kenya.

Click on the image above to meet four Somali refugees at Dagahaley camp in Kenya.

Doctors Without Borders/Médecins Sans Frontières (MSF) is still very concerned about the situation in one of the world’s most congested camp complexes, located in Dadaab, in northeast Kenya. MSF has been providing medical care for one year in Dadaab's Dagahaley camp, and while there have been some improvements during that time, the camp remains overcrowded, and refugees are only receiving the bare minimum to survive.

“In one year, we have seen improvements. Refugees are now receiving the full ration of food and receive some basic non-food-items, but there’s a clear need for more water and more space,” said Duncan Bell, MSF field coordinator in Dagahaley camp. “Although there has been an increase in the number of liters of water per person per day, people are still only getting 15 liters of water per day!” 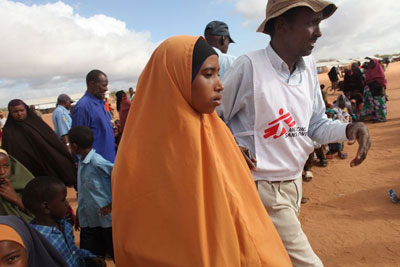 “Congestion is a huge problem,” Duncan said. “The relevant agencies and the government are trying to find a solution, but urgent action needs to be taken to bring forward the opening of a fourth camp or the extension of an existing camp as soon as possible."

Established in the 1990s to accommodate 90,000 people, the three camps are now inhabited by almost three times that number. Health facilities are overstretched and the massive concentration of refugees into such a small area is a public-health time bomb.

Every month, thousands more Somalis cross the border between Kenya and Somalia, which is officially closed,  to seek refuge. Today, over 260,000 people are living in the Dadaab camp complex. “As long as the situation prevails in Somalia, MSF cannot foresee that the influx of Somalis seeking refuge will reduce. We have been here for a year now, and we think the conditions in the camps are still unacceptable,” Bell said.

MSF is providing primary and secondary health care to over 100,000 inhabitants of the Dagahaley camp. In 2009, MSF teams treated more than 67,000 people, including 2,245 malnourished children. MSF also provides an integrated mental health project. The number of people suffering from mental disorders is particularly high among the camp population.

While MSF provides medical assistance to the tens of thousands of Somalis who flee their country to live in refugee camps in neighboring Djibouti, Kenya, and Yemen, the organization is also working inside Somalia. In 2009, the Somali population continued to fall victim to indiscriminate violence, while severe drought plagued parts of the country. Millions of people urgently require health care, yet the enormous gap between the needs of Somalis and the humanitarian response on the ground continues to widen.

MSF has worked continuously in Somalia for more than 17 years and is providing medical care at nine projects in the country. In the first six months of 2009 alone, MSF teams provided 376,000 outpatient consultations, including 164,000 for children under five. More than 22,000 women received antenatal care consultations, and more than 13,300 people were admitted as inpatients to MSF-supported hospitals and health clinics. There were 3,300 surgeries, 1,975 of which were injuries due to violence. Medical teams treated more than 1,400 patients for malaria and started 660 people on tuberculosis treatment. Nearly 15,000 people suffering from malnutrition were provided with food and medical care and 126,700 vaccinations were given.

More than 1,500 MSF Somali staff work inside the country, supported by approximately 90 international staff in Nairobi. MSF does not accept any government funding for its projects in Somalia; all funding comes from private donors.