Displaced in South Sudan: "I Left Running—There Was No Time to Take Anything"

More than 27,000 people have fled their homes in Yuai and Waat since mid-February after clashes between the Sudan People's Liberation Army (SPLA) and opposition groups. Those who escaped to Pieri have told MSF teams that civilians were shot at, raped, and killed and their houses burned to the ground. Now desperately short of food, water, and shelter, many of the displaced people are living under trees and eating leaves to survive. Doctors Without Borders/Médecins Sans Frontières (MSF) teams are providing basic health care and treatment for cholera and malnutrition. But unless living conditions improve and people are provided with increased and regular humanitarian assistance, the situation is likely to deteriorate further.

Here, people displaced from Pieri tell their stories in their own words. 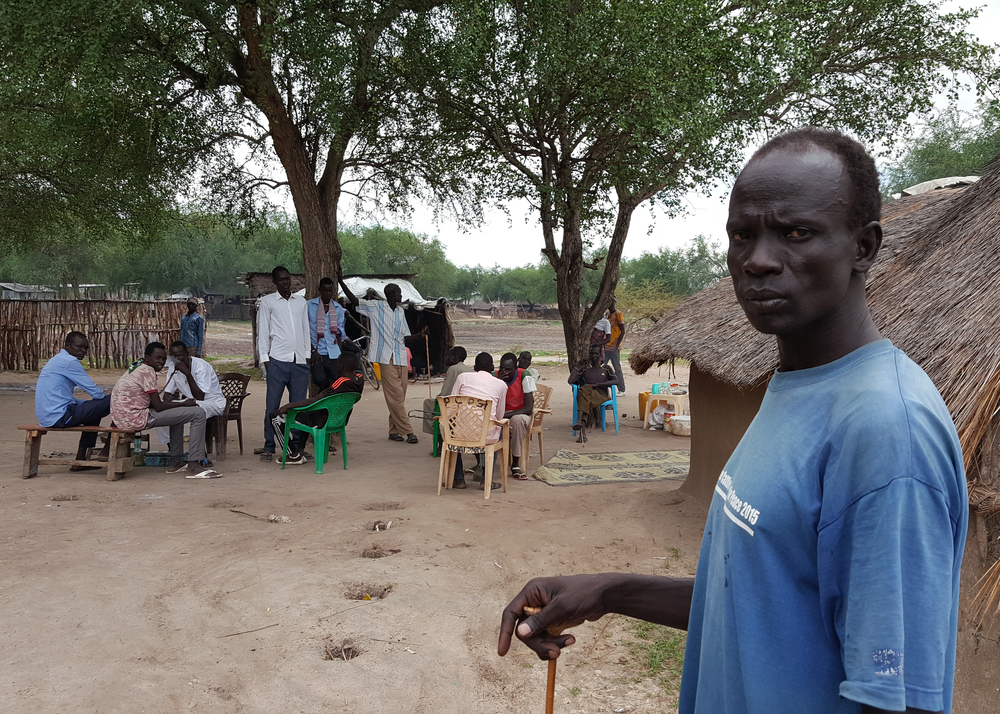 William Nyuon Kuolang, 41, is a father of five. He lived in Yuai until February 2017, when fighting between the Sudan People’s Liberation Army (SPLA) and opposition groups forced him to flee. Since then, he and his family have been sheltering in a village near Pieri.

"I left Yuai on February 15 because of the fighting. Armed men attacked us at two in the afternoon. I had to run with my wives and children. I left running—there was no time to take anything. I was just carrying the baby and running away.

They [the armed men] were firing their guns in the town. They killed the women, the girls, everybody in the town, and they also raped women. They killed my sister and both her children, and also my father and my uncle. When they kill a woman, they put a stick in her vagina. If it is a child, they put a bullet in the anus.

They burned some of the tukuls [mud huts], they took the cattle and they even destroyed the [water] boreholes in the community. In Yuai I had a big garden and some cattle. I lost my cows and the goats.

Life in Yuai used to be good. There was a lot of medicine, but when they attacked the city, they took the medicine and they also took the clothes. The children now have no medicines, no clothes; they sleep under the trees.

I come every day to Pieri. It is four hours’ walking. I come to find food for the children. Also, I come to know what’s going on today with the war. I don’t stay in Pieri with my family because I am afraid they could come and attack the town. Last week they came and stayed three hours. There was some shooting but nobody died.

When we were in Yuai, I had enough food for the family. The only food I get now is from [aid] distributions and the leaves from the trees. After eating the trees’ leaves, we feel pain in the stomach. I think that it is what brings diarrhea. One of my kids died from cholera a week ago. His name was Nyadel, he was five years old. I knew there were not enough drugs in Pieri, and I thought he would get better and it was better to wait. The next day, he was dead.

We get water from the boreholes, but there is not enough water for the whole community. That’s also why I come to Pieri—it is easier to get water here than in my village. When the rainy season comes, I’ll have water closer to my home. But when the rain comes, we will need plastic for shelter. I now live under a tree, there is nothing." 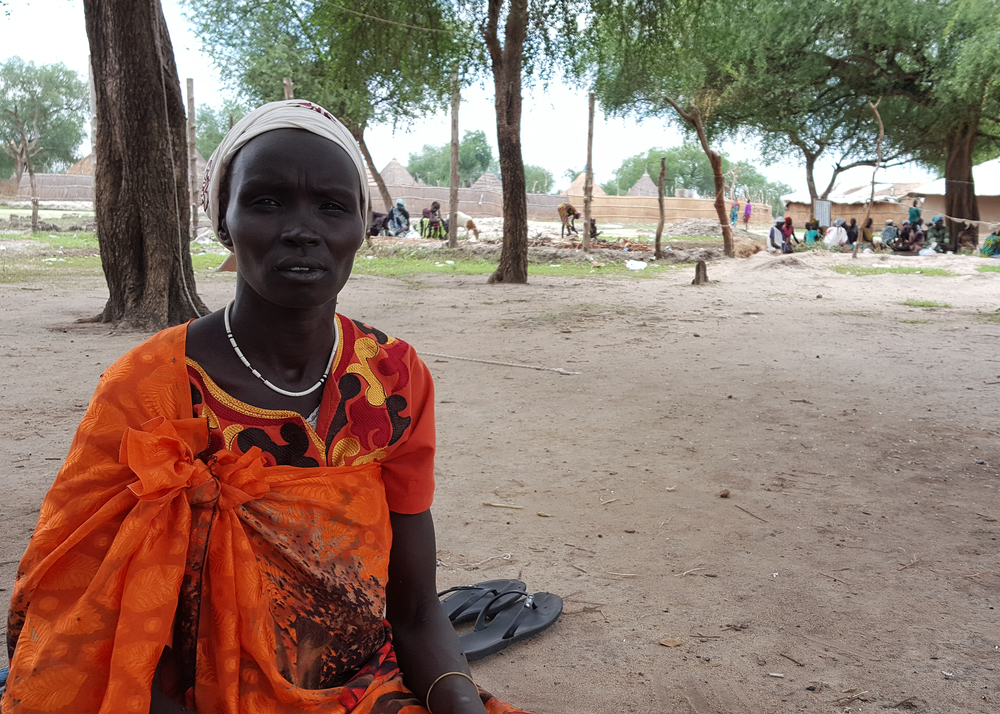 Elisabeth Nyamoun, 44, has eight children and six grandchildren. Since fleeing Yuai three months ago, she and her family have lived in Pieri, sheltering under a tree.

"I have been in Pieri for three months. I stay in town, under a tree in someone else’s compound. My whole family is in Pieri after we fled because of the fighting. Armed men come and kill people—that’s the only way to win. They fired guns in the community. It is not the first time I’ve been displaced from my home. The last time was in 2013. I was in Malakal when fighting happened there—that’s why I came to Yuai. Now I have had to leave again.

When we had to flee, some children got lost because it was impossible to run with them. Fifteen people I know got killed and ten others got shot. There were children, women, men.

On February 16, people went back to the town to find food. I know that more than 30 women were raped that day and two young girls were killed. They were 15 years old. They wanted to bring food, clothes, everything they needed to settle outside Yuai. Some women went to Lankien to get medical attention after it happened, but a lot of them just don’t tell anyone, not even their husbands.

Three things are difficult for us here: there is no shelter, there is no food, and the cholera is coming. We are eating only the leaves on the trees and the food from the food distribution. It is difficult to get food. We got one bag of sorghum, which is what we need for 12 days, more or less. There is still a little bit left, but people who cannot get a card to get food come and beg. They come from the villages around and I give them food.

There are some people in the town who are disoriented because of the lack of food and water. People also think about what they have left behind.  We try to make tea, but it is expensive in the market and we don’t have money. Nobody has a salary so nobody would buy firewood, and if I cannot sell anything then I don’t have money to buy anything in the market.

The water comes from the borehole and we don’t have enough for everyone. I cannot go back to Yuai until there are no soldiers in town anymore. Our tukul is burned, but I would like to go back." 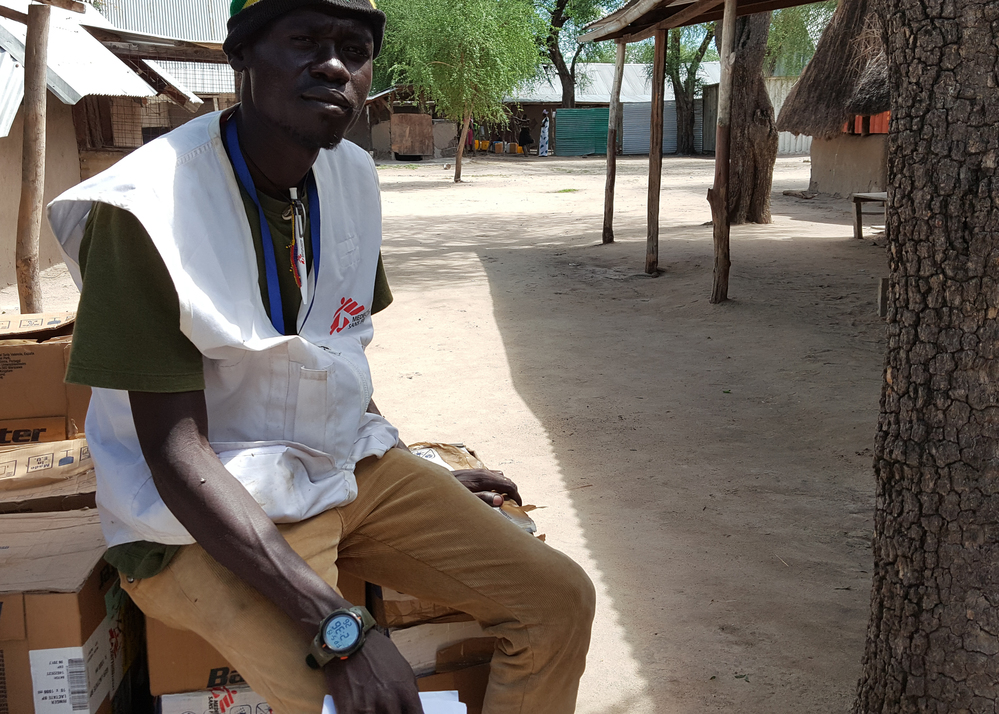 Nhiaan Chaar [name changed to protect anonymity], 29, worked as a pharmacist for MSF in Yuai. After fleeing Yuai in February with his wife and three children, he came to Pieri, where he joined up with other MSF staff members to run mobile clinics to provide people with basic health care.

"I was born and raised in Yuai. Then, in the early 90s, my parents decided to leave for Khartoum, because of the conflict and because there was no more food. I came back from Khartoum at the moment of the peace agreement in 2004–05. I got married in Yuai in 2009. My wife is originally from Pieri. At that time, I had a lot of cattle. Now I have only six cows. We had a really good life in Yuai. There were no combatants, it was nice and quiet.

I started working for MSF in 2011 as an outreach worker, and then in 2014 I became the pharmacist. The work was good, we had a lot of patients. We were 30 staff, including 17 medical workers.

They [the attackers] took everything in the clinic—everything. They killed people who were not running, the elderly and disabled. Afterwards, rapes happened. I only took my bag with my computer and my MSF T-shirt and came here. I left my money behind. When I arrived here with my family, my father-in-law gave us a tukul and helped me to have a bit of money by selling goods in the market.

As soon as we arrived [in Pieri], we—the MSF staff—started working from here, giving the drugs to the patients who needed them. We are three teams, each of them of six medical staff and four guards, running three mobile clinics. When it is possible, MSF brings the drugs here, or we go and meet the MSF teams elsewhere if the plane cannot land.

It is making a big difference, although we don’t have injections and we don’t treat diseases such as kala azar. Sometimes it is difficult that we cannot help someone because we don’t have the drugs. Also, a lot of children are sick because there is no good hygiene. It’s important to help our community to get their medicine and assistance.

Around 32,000 people used to live in Yuai, but everybody left. Some went to the camps in Uganda, Kenya, or Ethiopia. Because there is nothing to eat, people are still going to Ethiopia, but you need money to go there and a lot of people can’t afford it. I could go, but I don’t want to leave Pieri, as I’m helpful here.

The food situation in Pieri is very difficult. There is nothing in the market, so people who have nothing cannot buy anything. Most of the nongovernmental organizations are closed, so there is no money. I care for three families—my wife and my kids, my sister and her husband and her four kids, and also my father-in-law’s family. They don’t have any money. How could I leave for Ethiopia?

People are scared of cholera. They come to the clinic because every problem that they have, they think it is cholera. Twenty-three people died in the community last week and another four this week. I believe they died from cholera. Now we explain to patients how to protect themselves from cholera, but people still don’t know what to do. Even in my house it is a problem, even though I work for MSF and keep explaining to my family.

I like Yuai, and I don’t want to live here in Pieri. I know that a part of my house was destroyed and that they stole everything and all my money, but I still want to go back."

Read More: Thousands at Risk of Cholera and Malnutrition After Fleeing Attacks in Yuai and Waat