Doctors providing emergency medical aid to people fleeing the relentless bombardment of the Idlib region in northwestern Syria describe widespread suffering and despair. A military offensive by Syrian government forces backed by their Russian allies has uprooted 900,000 people since the start of December, 2019, the single largest mass displacement of the nearly nine-year-long war, according to the United Nations. Here, two doctors working with Doctors Without Borders/Médecins Sans Frontières (MSF), both of whom have been displaced themselves, share their personal accounts of the unfolding disaster.

“In the past week, the army has advanced rapidly through the countryside west of Aleppo. People weren’t expecting it….

"Some left on foot because not everyone can get hold of a car. They walked for kilometers in the cold, without their belongings, without anything to keep them warm. Some fled with nothing more than the clothes they were wearing. It’s been snowing for two or three days, here and across the whole of Idlib. You see people sitting on roadsides with blankets. You see women with children in their arms wrapped in blankets. You see children sitting in the snow under olive trees. It makes you cry to see it….

"The whole area is covered in tents, and the closer you get to the Turkish border, the more tents there are. Those who can’t afford to buy a tent are sharing tents with other families. Some people have dumped all their belongings on the ground because they haven’t got a tent yet, and they are living in the open. The people living in the open are freezing. It’s catastrophic.

"People of all ages are sick due to the cold weather. People don’t have heating and they don’t have medicines. They left their homes with nothing, and so they need everything. 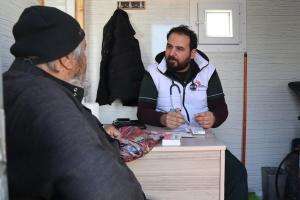 "I’m also a displaced person. From the village where I live now, we can hear the bombing close by, coming from the frontlines. It’s scary and it’s stressful. But I’ve become experienced in displacement, and I’m always ready to flee at a moment’s notice.

"The war has been going for nearly nine years, but this year alone is equivalent to the past nine years if you consider all the difficulties we are living through. This year, the attacks have been brutal, with all kinds of weapons: artillery, airstrikes, rocket launchers, machine guns.… People here know that the worst could happen at any moment.

"People are lost and have no idea what is going on. Fear has devastated us. We don’t know what’s going on politically, and we don’t know what will happen in the future. No one knows what the situation will be tomorrow, only that there are bombings and that government forces are advancing. All we want is a safe place to live.”

“Every day we document new arrivals [in Takad, in the western Aleppo countryside]. But people are now starting to flee Takad too due to the airstrikes targeting nearby areas…. People are frightened and they are fleeing….

"Most people are unable to find shelter in the towns they seek refuge in, so they are forced to pitch tents and sleep in the open. It’s very sad. This week saw the worst wave of displacement, due to the freezing temperatures.… These people are scared. Who would go under the snow and the rain unless they’ve lost everything?

"The bombings now are targeting the areas south of Takad…. Relatively speaking, ours is the safest area, so people fleeing the affected areas are coming to us. If we are bombed next, God forbid, people will escape from here too.

"Yesterday, we met a family who said they had been displaced seven times. First from Aleppo to Idlib, then from one village to another, in search of safety….

"So far, I haven’t thought of leaving Takad. I’m here to serve these strong people who decided to stay…. I have five children: three boys and two girls. They haven’t asked me to flee. They want to stay. They’re more resilient than me…. The schools closed over a week ago because of the fear that they might be targeted.”

Hours after this first interview, Dr. Ajaj was forced to reconsider and relocate with his family as the bombings closed in.

“The bombing started last Thursday night [February 13]. The only people who stayed in Takad were those who didn’t have a vehicle…. We are moving our supplies to a nearby town. I am still looking for a safe space where can resume our activities. For the people of Takad, we have left behind a few basic medical supplies…. It’s so hard now.”