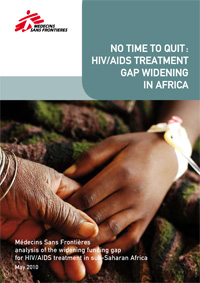 Johanesburg/New York, May 27, 2010 - Backtracking by international donors of HIV/AIDS treatment risks undermining years of positive achievements and will cause many more unnecessary deaths, warned the medical humanitarian organization Doctors Without Borders/Médecins Sans Frontières (MSF) in a new report released today.

Titled “No time to quit: HIV/AIDS treatment gap widening in Africa,” the report builds on analyses made in eight sub-Saharan countries to illustrate how major international funding institutions such as the U.S. President’s Plan for Emergency AIDS Relief (PEPFAR), the World Bank, UNITAID, and donors to the Global Fund to Fight AIDS, TB and Malaria, have decided to cap, reduce, or withdraw their spending on HIV treatment and antiretroviral drugs (ARVs) over the past year-and-a-half.

“How can we give up the fight halfway and pretend that the crisis is over?” asked Dr. Mit Philips, health policy analyst for MSF and one of the authors of the report. “Nine million people worldwide in need of urgent treatment still lack access to lifesaving care - two thirds of them in sub-Saharan Africa alone. There is a real risk that many of them will die within the next few years if necessary steps are not taken now. The current donor retreat will prevent more people from accessing treatment and will threaten to undermine all the progress made since the introduction of ARVs,” she said.

PEPFAR reduced its budget for the purchase of ARVs in 2009 and 2010, and also introduced a freeze on its overall HIV/AIDS budget. Other donors, such as UNITAID and the World Bank, have announced reductions over the coming years in funding for antiretroviral drugs in Malawi, Zimbabwe, Mozambique, Uganda, and the Democratic Republic of Congo (DRC).

The Global Fund, the largest funding institution in the fight against HIV/AIDS, faces a major funding shortfall. The US, the Netherlands, and Ireland have already announced that they will reduce their contributions to the Global Fund. In 2009-2010, contributions to already approved country grants were reduced by 8-12 percent.

Overall funding cuts have translated into a reduction in the number of people able to begin ARV treatment, as seen in South Africa, Uganda, and in DRC, where the number of new patients able to start ARV treatment has been cut six-fold. Already fragile health systems will become increasingly strained by an increasing patient load requiring more intensive care.

Drastically reduced drug inventories (stock-outs) and disruptions in drug supply are already a reality, and will become more frequent if sufficient funding is not made available. Health ministries and treatment providers in Malawi, Zimbabwe, DRC, Kenya, and Uganda have recently asked MSF to provide emergency drug supplies.

“If there is reduced funding, it will mean more people will die, and we will have more orphans,” said Catherine Mango, an HIV patient from Kenya. “The ones that are positive often need to assist others, like their children. People will lose hope and die. It will be the end. If there are no drugs there is no future.”

ARV treatment is lifesaving but also lifelong. This means that the number of patients under treatment increases cumulatively each year, thus requiring incrementally growing and sustainable funding.

“The HIV/AIDS crisis remains a massive emergency that still requires an exceptional response,” said Philips. “MSF calls for a sustained and renewed commitment by donors and national governments in the fight against HIV/AIDS, so that this disastrous public health crisis can be addressed appropriately.”