Since the start of 2008, 767 people suffering from cholera have required treatment in a cholera treatment center (CTC) supported by Doctors Without Borders/Médecins Sans Frontières (MSF) the city of Lubumbashi, the capital of Katanga province and the economic center of the Democratic Republic of the Congo.

A 15-person team from MSF’s DRC-based emergency team is currently working to fight the cholera epidemic that has been raging since the start of the year in the heart of Lubumbashi, a mining city in the southeastern DRC, with a population of 1.3 million.

“Patients lying on the bare ground”

The MSF team comprises a coordinator, three doctors, six nurses, five logistics specialists, and a water sanitation and disinfection expert. Highly contagious, cholera is a bacterium that is easily transmitted via fecal matter and vomit and by drinking contaminated water. Two additional members of the MSF team are taking care of raising awareness among the population on the ways in which they can protect themselves from contracting the illness. 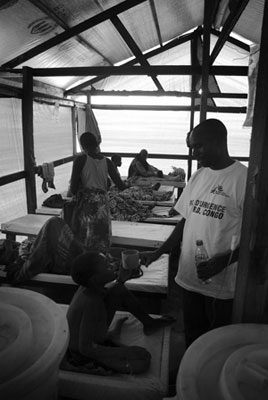 On January 10, 2008, while the MSF emergency team was working in the city’s only CTC, located in one of the general referral hospitals in the Kenya district, the number of patients rose so rapidly that hospital staff were completely unable to cope. “On site, the result was people lying on the bare ground due to the lack of space, dangerous proximity between patients and those accompanying them, non-compliance with standards for disinfection with chlorinated water between the interior and exterior of the CTC,” says Bertrand Perrochet.

The MSF team first reorganized patient care by placing disinfection areas outside of the hospital, thereby also increasing the capacity of the center. The severely ill, those suffering from severe dehydration due to vomiting and diarrhea caused by the vibrio bacteria, are placed in an isolated room and put on an intravenous drip. Following the changes in their health, they then go through various phases of treatment until the convalescence area. In all, patients undergo four phases of treatment before full recovery. “Normally, each phase of treatment is separated from the others,” says Perrochet. “At the Kenya CTC, we have had to divide the patients between the three rooms available to us. Given the significant number of hospitalized patients, 79 at present, we have increased the capacity of each room to 35 beds.”

“Not treated in time, cholera results in fatal dehydration in 50 percent of cases, but the quicker the sick are treated, the more easily and rapidly they recover. The risk of contagion is also reduced and this is important in a big city like Lubumbashi, where a great number of people live in precarious and overcrowded conditions.”

Nevertheless, it was necessary to open a second treatment center. On Saturday, 19 January, MSF opened a CTC in the Katuba district, eight kilometers from Kenya district. Twenty-four patients have already been admitted. Over several days, community awareness raisers informed the population about the imminent opening of the center. “We were able to reduce the overload on the Kenya centre and provide closer care to a greater number of patients,” says Elke Frans, MSF nurse. The Katuba district is one of the biggest focuses of cholera in the city. Until now, due to the lack of a center, patients had been crossing Lubumbashi before receiving treatment. “This can have very serious consequences,” continues Frans. “Not treated in time, cholera results in fatal dehydration in 50 percent of cases, but the quicker the sick are treated, the more easily and rapidly they recover. The risk of contagion is also reduced and this is important in a big city like Lubumbashi, where a great number of people live in precarious and overcrowded conditions.”

Illness of ‘the poor’

MSF is now focusing its efforts in order to limit the spread of the epidemic, while lamenting the fact that it could not be contained in time due to the lack of adequate resources deployed for the poorest population of this rich mining city. “The situation was entirely manageable for the health authorities,” insists Perrochet. “But neither adequate tools nor sufficient resources were deployed to contain the cholera epidemic and prevent it spreading.” A serious epidemic previously hit the capital of Katanga in 2003 and MSF also provided assistance on that occasion. Once again, it is the people living in difficult hygiene conditions and without access to drinking water that are affected by this illness of “the poor.”