In DRC, malaria is the leading cause of death. So far, MSF has treated more than 17,000 people in Maniema, Equateur, and Orientale provinces. 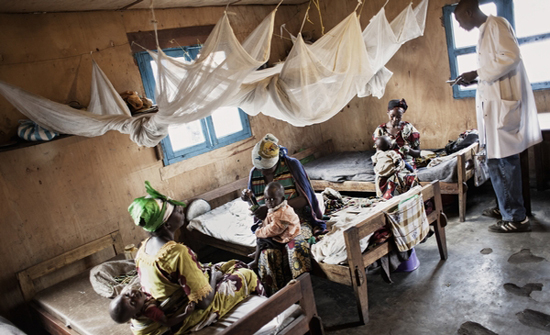 Mothers feed their children beneath mosquito netting in an MSF facility

Several regions of the Democratic Republic of Congo (DRC) are facing a serious outbreak of malaria. Doctors Without Borders/Médecins Sans Frontières (MSF) teams are working in three provinces, supporting the Congolese Ministry of Health. So far, MSF has treated more than 17,000 people in Maniema, Equateur, and Orientale provinces.

In DRC, malaria is the leading cause of death. Every year the mosquito-borne disease kills 180,000 children under five.

The precise cause of the current outbreak is still uncertain. The health care system in DRC is unable to mount an adequate response to the crisis, due to a lack of resources, infrastructure, and properly trained medical personnel.

Delivering emergency medical aid in remote areas is both a human and logistical challenge.

"The villages in which we work are mostly inaccessible by road. Our teams and our medical supplies are sent by motorcycle, canoe, or on foot," explained Carole Coeur, MSF project coordinator.

MSF is responding to the malaria outbreak by treating severe cases in referral hospitals and uncomplicated cases in health centers or mobile clinics. MSF is also conducting prevention and awareness activities.

"To contain the disease, a purely preventative approach such as mosquito net distribution is not enough. We must also treat as many people as possible," said Dr. Jorgen Stassijn, a malaria specialist and member of the MSF team currently working in Equateur Province.