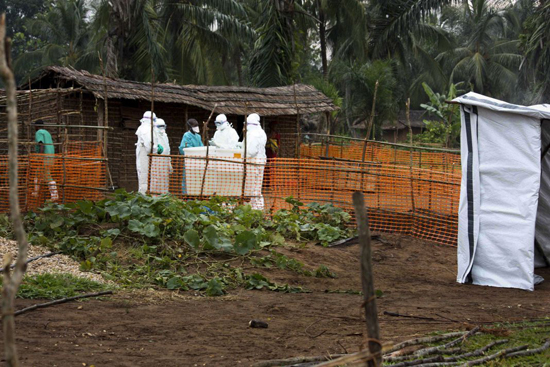 MSF staff in protective gear work in an isolation unit for patients suspected of having Ebola in Kaluamba, Western Kasai Province.

Ebola hemorrhagic fever is a highly contagious disease. Patients present with high fever, headaches, vomiting, diarrhea, and, in some cases, external or internal bleeding. Case fatality rates have ranged from 50 to 90 percent. Typically, by the end of the second week of illness, patients succumb to multiple organ failure. No vaccine or treatment exists for this infection. But rapid recognition of an outbreak and early response can reduce the number of new cases in communities and in hospitals where patients seek care.

The number of people with suspected Ebola hemorrhagic fever in the Mweka district of Western Kasai Province, in the Democratic Republic of Congo (DRC), is now 38, including 12 who have died. This is the second outbreak of its kind in just over a year in Western Kasai; the current outbreak claimed its first life on November 27.

Last week, international medical humanitarian organization Doctors Without Borders/Médecins Sans Frontières (MSF), sent a team of expert medical and non-medical staff to the area. A team of 16 are now working around the clock to contain this deadly epidemic.

MSF built a small isolation unit in Kaluamba, the worst-affected village in Mweka district. Here, to reduce the risk of the virus spreading, patients who are already sick, along with others who are suspected of having Ebola, are separated from the community and cared for. Currently, there are two patients in this special ward.

MSF also set up another isolation center further north in the district, in Kampungu. This center can host up to 25 patients if the outbreak extends even further.

Ebola is a highly contagious and deadly viral disease. It is transmitted between people through contact with body fluids (blood, vomit, diarrhea). Thus, because of their proximity to the patients, both health staff and family members are at serious risk of contracting the disease.

MSF hired and trained a dozen local “home visitors” to help reduce the spread of the outbreak. These home visitors identify and follow up with those people who have had any contact with the disease. Currently, there are 184 people who must be tracked.
Another 36 local people travel throughout the communities, ensuring that people are properly informed about the disease and are aware of the health services available to them.

MSF is closely monitoring what could possibly be new pockets of Ebola in the same district of Mweka. However, other diseases, including malaria and shigellosis, which can also have similar flu-like symptoms to Ebola’s in the first stages, have been confirmed in the area. Thus, confirmation is still pending from the laboratories to determine whether these new cases are Ebola or not.

Dr. Armand Sprecher is an MSF physician specialized in hemorrhagic fevers like Ebola and Marburg. He advised MSF teams on how to respond to an outbreak of the disease in West Kasai, DRC, in September 2007. In this interview, he describes Ebola hemorrhagic fever and the measures that are taken to control the outbreak.

Listen to an interview with Dr. Armand Sprecher: