to drug companies asking them to put their drug patents in the pool. 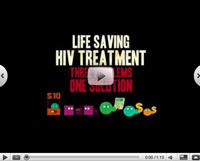 Why We Need a Patent Pool

New York/London, September 30, 2009 – The international medical humanitarian organization Doctors Without Borders/Médecins Sans Frontières (MSF) today called on nine of the world's largest pharmaceutical companies to help accelerate the availability of new treatments for millions of people living with HIV/AIDS, by pooling their patents on a list of key HIV medicines.

A patent pool is a mechanism in which a number of patents held by different parties are brought together and made available to others for production or further development.  Patent holders receive royalties paid by those using the patents. The mechanism has been instrumental in promoting innovations in the aeronautics and digital telecommunications industries, for example.

Make It Happen – Help Us Get HIV Drugs in the Pool

"It’s a simple idea: companies share their knowledge in return for fair royalty payments,” said Michelle Childs, director of policy and advocacy at MSF’s Campaign for Access to Essential Medicines. "But it has the potential to transform companies’ approaches to access to HIV medicines and foster innovation in a way that marks an alternative to the confrontation and litigation of the past.”

UNITAID, the international drug purchasing agency, is currently establishing a medicines patent pool for HIV drugs.  Critical to its success will be the willingness of patent owners to participate, by including their patent rights in the pool.

"The scheme is voluntary, so companies have a choice -- and today we’re asking them to make that choice,” said Childs.  “This is an opportunity for these drug companies to demonstrate that they are genuinely committed to effective measures that allow access to life-saving medicines for people with HIV in developing countries.  Some companies have expressed interest in the idea, but we need them to go further and put key patents in the pool.”

For people living with HIV/AIDS, the impact could be considerable.  A patent pool could speed up the availability of more affordable versions of new medicines, as generic production could begin well before the 20-year patent terms expire.  Currently, patent barriers can also prevent innovation such as new pediatric formulations or much-needed fixed-dose combinations.

“This opportunity comes at a crucial time,” said Dr. Eric Goemaere, medical coordinator for MSF in South Africa.  “Many patients in our programs have developed resistance to their medicines and need to switch to newer, more effective drugs now. Because these are either unavailable or unaffordable, patients face a return to AIDS death row as treatment options dry up.”

Some of the drugs identified by MSF to be essential for the pool, based on its field experience, are recommended by the World Health Organization for use in developing countries.

Click here for the list of drugs that MSF is calling for to be included in the UNITAID patent pool, and to learn more about each medicine.

MSF currently treats over 140,000 people living with HIV/AIDS in 30 countries.