East Asia: MSF Responds to Disasters in Indonesia, the Philippines, and Samoa Islands

Several MSF emergency teams have already arrived or are en route to countries in East Asia after a succession of natural disasters in the region. In Indonesia, the Philippines, and Samoa islands, MSF will focus its activities on meeting unmet needs, from surgical care to distribution of relief items. 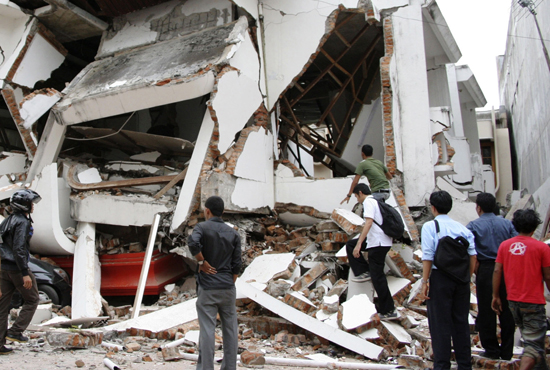 People gather near a collapsed shopping mall after an earthquake hit Padang, on Indonesia's Sumatra Island.

Several Doctors Without Borders/Médecins Sans Frontières (MSF) emergency teams have already arrived or are en route to countries in East Asia after a succession of natural disasters in the region. In Indonesia, the Philippines, and Samoa islands, MSF will focus its activities on meeting unmet needs, from surgical care to distribution of relief items.

After a quick assessment of the needs in Rizal Province, in the Philippines, an MSF medical team began providing medical care to people in an evacuation center in Montalban. On September 30, staff conducted about 80 medical consultations. MSF is also providing non-food items such as blankets, cooking pots, mattresses, jerry cans, and hygiene kits. Many of the poorest people who were living close to the river had their homes and belongings washed away in the floodwaters.

Other MSF teams are assessing 10 additional locations in Rizal and Bulacan provinces to identify needs. The assessments are focusing on locations where the response so far has been limited. A team of 13 MSF international staff is on the ground to respond to the emergency. Four medical and water and sanitation specialists with emergency experience are also arriving on October 3.

Indonesia: An earthquake of magnitude 7.6 struck the city of Padang, on the western coast of Indonesia's Sumatra Island, on September 30 at 5:16 p.m. local time. According to the government, more than 750 people have been killed and thousands are trapped under rubble. The worst affected areas are said to be the cities of Padang and Pariaman.

The first MSF team departed for Indonesia on October 1, and includes a coordinator, a nurse, and a psychologist. They are leaving with three nephrologists from the Renal Disaster Relief Task Force of the University of Ghent, Belgium. A second team of three with experience in natural disasters left from Panamá, as well. More surgeons, nurses, logisticians, and a psychologist will leave from Barcelona, Athens, Paris, and Brussels to Indonesia as soon as possible.

Relief material and medical equipment to be flown to Indonesia are under preparation, in Brussels and in Bordeaux.

Samoa Islands: A powerful earthquake of magnitude 8.3 struck in the South Pacific between Samoa and American Samoa on September 29 at 6:48 a.m. local time. The earthquake caused four tsunami waves up to 4 or 6 meters high (13 to 19 feet) which travelled up to 1.5 kilometers (1 mile) inland. According to the authorities, at least 150 people were killed and hundreds are missing in Samoa, American Samoa, and Tonga islands. The highest death toll is in Samoa.

An MSF team made up of three people—a coordinator, a logistician specialized in water and sanitation and a medical doctor—is to leave Australia for Samoa on Friday, October 2.

How MSF Responds to Natural Disasters

“In the first hours after a natural disaster, immediate life-saving interventions are carried out by local medical staff,” said Marie-Noëlle Rodrigue, an MSF emergency operations manager. “In the case of Indonesia, we know that the country has good capacity to respond to the emergency. But our experience after earthquakes shows that international medical teams have an added value in terms of specialized medical care, specifically orthopedic surgery or nephrology care. We have the capacity to set up an inflatable hospital quickly, with two operation theatres and dozens of beds for patient hospitalization. It’s the same kind of structure we used in Manshera, in Pakistan in 2005, where the surgical team carried out around 500 orthopedic procedures after the earthquake.”

MSF is sending emergency teams with medical materials from Brussels, Paris, and Panama to Indonesia today, Thursday, October 1. Three nephrologists from the Renal Disaster Relief Task Force of the University of Ghent, Belgium, are leaving with the MSF team. They will carry out dialysis in order to treat people suffering from ‘crush syndrome’, a condition in which muscle tissue damaged by severe internal injury may release massive quantities of toxins into the bloodstream and lead to kidney failure. Left untreated, crush syndrome can be fatal.

“Besides medical needs, often there are also isolated groups of people left in dire situations for days or sometimes weeks after natural disasters such as earthquakes or floods,” Rodrigue said. “Our teams focus on the most vulnerable populations, like those who have most difficulties reaching assistance because they live in isolated areas, to provide medical care or distribute relief depending on the needs.”

The range of MSF’s activities after natural disasters includes psychological care, as in China in 2008. Two psychologists are on their way, one to Samoa islands and the other to Indonesia. Others are on stand-by.