"This Emergency is Huge"I"ve Never Seen Anything Like It"

Helen Ottens-Patterson, an MSF nurse, describes the dire situation in Batil camp, where more than 110,000 Sudanese refugees are struggling to survive. 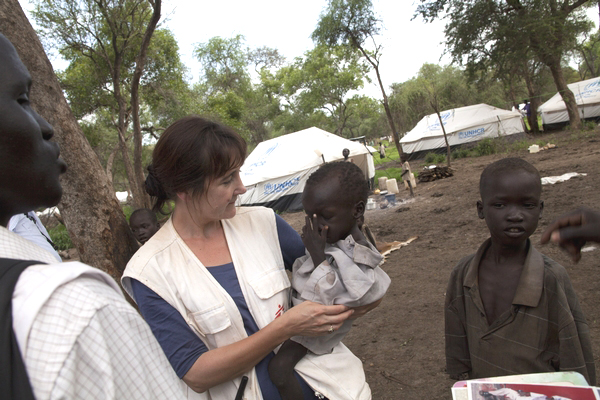 Helen Ottens-Patterson and Mohammed, who is now receiving intensive treatment for malnutrition at an MSF facility.

Helen Ottens-Patterson, from the United Kingdom, is a nurse and Doctors Without Borders/Médecins Sans Frontières (MSF) medical coordinator in Upper Nile State's Maban County, South Sudan. Here, MSF is the largest provider of emergency medical care for more than 110,000 refugees that have fled fighting in Sudan’s Blue Nile state. In Batil refugee camp, one of four camps in the county, a recent survey carried out by MSF showed that the mortality rate for children under five years old was more than double the emergency threshold. Here, Helen shares her experience providing care for this particularly vulnerable group of people.

Batil and three other camps in the area are situated on a flood plain, and initially there were no services in place for the refugees arriving there. Everything had to be started from scratch: health care, access to clean water, and hygiene and sanitation systems. It was very difficult to imagine where people would actually live and how they would survive. This is an extremely remote area of South Sudan and road access is nearly impossible. Everything has to be flown in.

“I go walking into different parts the camp to try to understand the challenges for the people living here. Yesterday we went to a particularly isolated place; I looked around, talked to some of the refugees there, looked in the tents and saw very little food. Then I caught a glimpse of a small boy who stood out from a distance. He was so thin that he looked almost like a tiny ink drawing. His skin was crinkled and falling in folds, he had absolutely no flesh on his arms or legs or his bottom, and he had the big belly that’s an indication of worms. He was in a very, very bad condition.

Mohammed was the youngest of ten children. His mother had died during pregnancy while fleeing Blue Nile State, on the journey to Batil. His father was the sole parent, taking care of nine other siblings. Mohammed was in MSF’s outpatient feeding program for severely malnourished children, but he wasn’t eating the therapeutic food that our medics had given him. Clearly his father just could not cope; he had so much to do and he was managing alone. So we decided to admit the little boy to our hospital so he could receive intensive treatment.

If I hadn’t by chance come across this child yesterday, he would have likely died within a matter of days. It’s so important that we go out into the camp to reach people. Without that, the other children and families that are out there are not going to get the support they need in order to survive.

Families have lost and are losing mothers, fathers, and children. The coping mechanisms of this population have been destroyed. People who could normally manage just simply can’t. Their reserves have been eroded piece by piece during the long and grueling journey that has brought them to Batil camp. You see their faces, and it’s not that there is no emotion—they are feeling something inside, but they are just shutting down. It’s something that I can’t really describe. We have to actively seek out and support these vulnerable families and help them with each step.

The scale of this emergency is huge, we are talking about a camp of some 35,000 people, not just a small group of families. Out of this population, around 9,000 are children less than five years old. More than 1,500 of these children are registered in our feeding program in the most severe stage of malnutrition. According to our latest mortality survey, every day three or four children are dying in the camp of preventable diseases.

Despite this grave situation, people still come to us, which shows that they do have some kind of hope. They wouldn’t if they didn’t think there wasn’t a chance for MSF to make a difference. And you see people smiling, welcoming you into their shelter, showing small gestures of kindness despite the adversity that they face. Where that comes from, I don’t know. It’s a lesson for all of us, it motivates me and gives me courage to continue my work.

The gravity of this emergency is different. I have never really seen this anywhere before and I have been working for MSF since 1999. I am a nurse, this is my job, you have to cope with death and dying, you have to cope with disease, but normally it is more balanced. It’s tough for me as a medical professional and as a human being. It has really touched me and I sometimes feel very helpless, even with the resources and expertise of MSF behind me.

This is what we’re good at and what we’re here for: responding to the most urgent and immediate medical needs. It is incredible what we have been able to achieve, but it’s not enough. There is always something more that can be done, and we have to fight to make sure these people have what they need, not just to survive, but to give them dignity, give them quality of life, make sure that they can maintain the spirit that they have.”

In Batil camp, MSF rapidly set up a 130-bed emergency field hospital, with outpatient and inpatient services, maternity, and a therapeutic feeding center. MSF currently has more than 1,600 children suffering from severe acute malnutrition in its therapeutic feeding program. Every week about 30 of these children need to be admitted into intensive care with life-threatening medical complications such as diarrhea or respiratory diseases. Since Batil camp was set up in May, MSF has conducted more than 14,500 medical consultations. The team also assisted in the distribution of basic survival essentials when the refugees first arrived and has been involved in the essential, and still ongoing, task of setting up and running a water distribution network.

Across the four camps in Maban county, Upper Nile State, MSF currently has more than 160 international staff working alongside some 700 national staff, running three field hospitals, providing more than 7,000 consultations each week. MSF is also undertaking extensive water supply and distribution activities, including the management of boreholes and hand pumps and setting up oral rehydration points.