Ethiopia: "It Is Not Good for People to Fear Every Day and Night"

These testimonies from Somali refugees in southern Ethiopia describe the violence that drove them from their homes and the challenges they face in the refugee camps they've settled in. 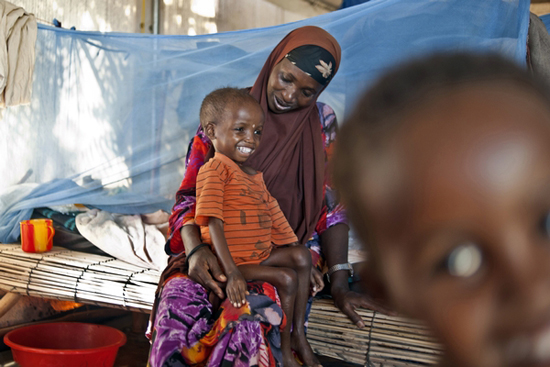 Zaynab brought her son Ibrahim to the Hiloweyn ITFC to get treatment for his severe malnourishment.

Testimony of Zaynab, who brought her malnourished son Ibrahim to the Doctors Without Borders/Médecins Sans Frontières (MSF) Health Center after fleeing draught and war in Somalia:

Zaynab and her three-year-old son Ibrahim have been in the intensive therapeutic feeding center (ITFC) of Dolo Health Center for 17 days because Ibrahim was severely malnourished. In such cases, the child must be admitted as an inpatient and closely monitored. One relative is required to stay in the ITFC to look after the child. In most cases this is the mother.

"We are from Gedo [region, not far from Ethiopia], and for the last ten years we have had to flee to Ethiopia regularly because of war or draught," said Zaynab when asked how she came to the Dolo Health Center. "I think this is the fourth or fifth time that we are back in Ethiopia."

Back at home in Somalia, Zaynab and her husband are farmers, cultivating maize, tomatoes, beans, and tobacco. Somalia was hit frequently by draughts over the last years, and earning money from selling their products on the market became extremely difficult. The Gedo region has also seen consecutive wars, first between regional warlords, then when Ethiopia invaded Somalia in 2006–2007, and currently between the UN-backed "Transitional Federal Government" and armed opposition.

"My husband went back to Somalia in order to go and get his mother, who had remained behind. I hope that they will soon join us here in Dolo Ado," Zaynab added.

Three-year-old Ibrahim fell ill and as a consequence grew very thin. According to one MSF nurse, when they came to the health center, the boy had all the signs of progressed malnutrition. In addition to his emaciated body, he had edema and had stopped reacting to outside stimuli, his face like a death mask. "His recovery in 17 days has been remarkable. He has become lively again, getting better quickly, and when we smile at him he smiles back, which means that his neurological system is recovering."

In a few days, Zaynab and Ibrahim will be shifted to the outpatient therapeutic feeding program, where Ibrahim's treatment will be continued with daily visits to the clinic. The other household members will be given food rations too.

MSF built the Dolo Health Center buildings in 1997, and has been involved in this regional medical facility ever since. Because the renewed influx of Somali refugees into Ethiopia following the major crisis inside Somalia earlier this year has overburdened the town’s facilities, MSF is building additional wards and setting up a surgical unit to care for both local residents in the wider region and the refugee population.

Testimony of a 30-year-old woman in the ITFC in Hiloweyn camp, who walked to Ethiopia from Somalia after draught destroyed her family's harvest:

I have come here for the second time. I was staying in this hospital for over a month because my child was very ill. After some weeks we could go back to our shelter. But then after two weeks my child was sick again. He had diarrhea, chest pain, and fever, and he stopped eating the Plumpy’nut that you give us (Plumpy‘nut is special formula food that has been developed to treat malnourished children). So now I’m back in this place, I wonder what is wrong with him. He was feeling good in Somalia, but now he is just sick all the time. I think it is because we have no milk to give him. My other children are not sick like him.

I came to Dolo together with my husband and seven children. The other children are with my relatives in Somalia. Some of them have to stay there. We come from the bush. Many cattle died because of the drought. We only have some goats and donkeys left. We were suffering, there was no food in the markets, and our harvests had failed, the soil is too dry. We came walking from the village of Oforu, it took 3 days. The journey was fair, but we had to stay in the Dolo Ado Transit Center for very long. Now we have been here [in the refugee camp] for more than four months. There is a lot of fighting in Somalia, so we cannot go back. It is too dangerous. Here there is peace and the children don’t die from hunger.

Testimony of a 22-year-old woman who walked for 39 days to bring her sick child to the ITFC in Hiloweyn:

I have been here in the hospital many times. Now I came back today because my child is sick again. He has boils on his head and he doesn’t want to eat. My husband had a farm in Somalia. We had a good life there. But he died, and all our animals died so I had to leave. I came to Ethiopia together with my mother and this child. He is my only child. I think he is sick because of this environment. Where we come from in Somalia it is cold. Here it is very hot and dry. We walked for 39 days from Baardheere to Dolo. It was very hard, because it was a long walk and we had little food. The situation here in Hiloweyn is good: we get food and we go to the river to collect firewood. It is dangerous to walk to the river; men come and rape the women. I know women who have been raped. We have to go there together with men, but sometimes the men don’t have time. I got married to another man, but he is often away, and when he comes back he tells me what to do. Last time I was here in the hospital I left because my mother was sick. The doctor said I have to stay, but I could not stay longer in the hospital, and I think my son gets even sicker here. I want to go back to Somalia with my husband. My mother will stay here.

Testimony of a 45-year-old woman who fled violence in Somalia with her sick daughter:

My little girl was sick in Somalia. I thought she would recover in Ethiopia but her illness has continued here. I was here in the hospital with her for more than four weeks. Then we could leave the hospital, but after some weeks she was sick again. I don’t have enough food to give my children so the smallest one gets less food. The hospital is good, but I have other children at home and I have to take care of them, if not they will also fall sick. The biscuits that MSF gives are good for us. It keeps our children happy. When they don’t have biscuits they stop smiling. UNHCR gives us food: oil, rice, wheat flour, and sometimes sugar. Now we have not received sugar for many weeks, and we have no milk. Our children need tea; they always drink tea in Somalia so now when they don’t have it they are more vulnerable.

I come from Diinsoor. Life there is even harder than here in Hiloweyn. Here we only have problems with the food, in Diinsoor we have problem with food and there is also no peace. You cannot live without peace, it is not good for people to fear every day and night. It makes us sick. I came here with my husband and my children. My mother and some other people we know arrived to Hiloweyn after us. And more people will come. We cannot go back to Somalia, it is too dangerous. I even have nightmares about things that happened to us in Somalia, when armed men stole our cattle and beat my husband so hard I thought he would die. I will never go back. Hiloweyn is my future. Things can only improve now.