Ethiopia: "There Is Still So Much to Improve" 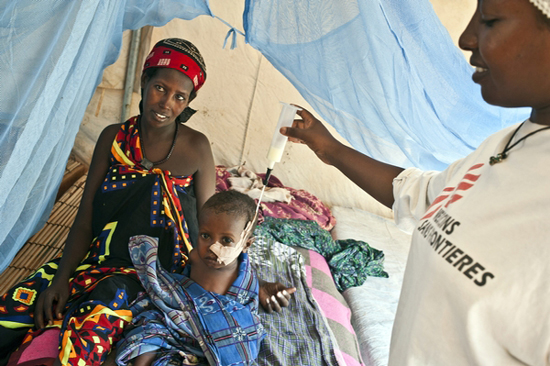 In early 2011, there were some 40,000 Somali refugees in Ethiopia. By the end of 2011, that number had more than tripled, to 142,000, following a mass exodus triggered by a terrible drought that killed crops and herds in a country already wracked by 20 years of conflict. The numbers alone, however, do not tell much about the days, or even weeks, Somalis spend walking to reach and cross the border with barely any food or water. It does not reveal the dire malnutrition affecting the children in the camps, nor does it express the effort made by humanitarian agencies to fight hunger and exclusion and reduce emergency levels of child mortality. José Luis Dvorzak, a Doctors Without Borders/Médecins Sans Frontières (MSF) doctor in Liben, reminds us that there is still much work to be done.

You have worked as a doctor at different times in the past two years in the Liben camps.

I first arrived in June 2010. There were three international workers and 35 national employees. We carried out nutritional activities in the two camps, in Bokolmayo and Malkadida (40,000 refugees) and the Dolo Ado health center. The second time I arrived in September 2011, the change had been enormous: we had 50 international workers and over 800 national employees. By then, new camps had been opened, Kobe and Hillaweyn, each sheltering 25,000 new refugees that had arrived from Somalia in the worst of conditions, with very high mortality rates. At one point there had been up to 13,000 people admitted in our feeding program. In September, after months conducting a nutritional intervention, we managed to reduce mortality to levels below the emergency threshold.

How would you describe the medical situation endured by the population at present?

We still have children admitted in our stabilization centers suffering from severe malnutrition complicated with other diseases such as pneumonia or diarrhea—some 45 kids (during the emergency peak this figure rose to over a constant 150) weekly. The most common pathologies amongst the population are respiratory infections, diarrhea, intestinal parasites, and skin diseases. Currently, we are also implementing mental health and epidemiological surveillance programs using community health workers.

What are the challenges faced when working in Liben?

The medical status of the population is precarious. After a 20-year civil conflict in Somalia, where public health structures in the country are scarce or have been destroyed, the population is not used to using medical services.

What is the impact of this on the overall health condition of the population?

We have gone from an emergency nutritional crisis situation to a chronic one. The situation in the camps does not make it easy for the people to cook their own food: women need to go to the bush for firewood, running the risk of being attacked on the way. In other cases, the standardized food they receive, with the nutritional intake they need, is rejected and sold in the markets to buy food stuffs which are closer to them by tradition, but lacking the most essential nutrients.

Changing these habits is not easy and it requires lots of previous explaining and thinking. Global malnutrition levels were already high before the emergency context and they skyrocketed with the enormous flow of new arrivals from May to September–October.

How did you manage to overcome the emergency threshold?

Once the new camps were full and no new arrivals were being admitted, then the task was to provide food, monitor severe malnutrition in children, and conduct epidemiological surveillance activities to respond to eventual outbreaks. In Kobe, which houses 25,000 refugees and registers mortality rates exceeding by far the emergency threshold (1 dead per 10,000 people a day), we had to fight a measles epidemic (a disease that combined with malnutrition may be fatal) and organize a mass vaccination campaign targeting children under 15 years of age.

We are now in a stabilization phase. The authorities have handed over part of our activities to other actors while MSF is still managing stabilization centers for children in critical condition in three of the five camps. However, we are still concerned because of the nutritional status of the population. There is still so much to improve in terms of nutrition.

There has been some rain in Somalia. Do the refugees want to return?

Some want to return and in fact they do, despite the war. They go back to benefit from the recent rainfall and try to make a new life for themselves. Nevertheless, there are still new arrivals, about 70 a day on average—far from those 23,000 a month registered last year, but they are still coming.