Nearly 120,000 Somali refugees are now taking shelter in Ethiopia's Liben region, in camps originally built to house less than half their number. 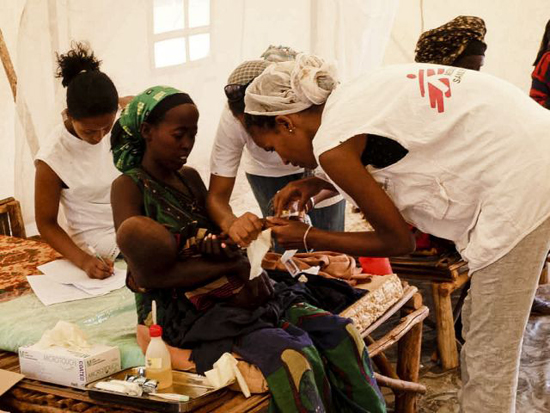 MSF staff tend to a Somali mother and her child in Liben.

Hadija Isaac Abdu toys with the plastic syringe that she uses to feed her severely malnourished three-year-old son at a Doctors Without Borders/Médecins Sans Frontières (MSF) stabilization center at the Malkadida refugee camp. Originally from Somalia, she arrived here in Ethiopia recently, seeking assistance for her family in the face of a prolonged nutrition crisis. “We are farmers,” she says. “We grow corn and sorghum. We had cows. The crops failed because of the drought, and when the cattle died we decided to leave. We had to walk for seven days without food to get here. The only food we ate was what people gave us along the way.”

Yussuf Jemale Hassan, a 51-year-old with six children, came from Garbaharey. “We used to have 40 camels and 150 goats. When I left there were only two camels and five goats. I have no way to earn a living now, no place of peace to which I can return. All that is left of Somalia are landmines, war and hunger.”

Hadija Isaac and Yussuf Jemale’s experiences are typical of the 118,000 Somali refugees now seeking aid in camps in Ethiopia’s Liben region. Almost half arrived in the last two months, having fled drought and hunger, not to mention a war that has raged for two decades. The massive influx of refugees has overstretched the resources of the Liben camps, which were initially built to shelter 45,000 people. Soaring malnutrition is compounding matters. According to the routine checks MSF carries out, half of all newly arrived children under five are malnourished. In July alone, two hundred children were admitted to stabilization centers for children with severe malnutrition and complications.

The families waited as long as they could, hoping the rains would eventually come. Most are semi-nomadic shepherds and farmers who had already endured 20 years of conflict and turmoil in their homeland but never envisaged having to leave one day. It was the last resort, a decision taken only after huge numbers of livestock died and crops failed.

Many children were already malnourished by the time they left Somalia, and during the long walk to cross the border—for some, it lasted up to 20 days—their health deteriorated even further. “In June they were arriving by the thousand,” recalls Kadir Abdi, an MSF nurse at the pre-registration camp that refugees come to as soon as they cross the border. Abdi is part of a team that assesses the state of new arrivals and immediately transfers the most serious cases to health centers. Some 2,800 people arrived on June 28 alone. “I was horrified by the case of one grandmother who made it here with three small grandchildren. All three died no sooner than they’d arrived. It was too late. Nothing could be done for them.”

“We sold our last few goats to buy some food for the journey,” says 30-year-old Amina Dakey, a task made all the more difficult because the price of corn and other basic commodities in Somalia has spiked dramatically of late. During the 10 days it took to walk from Dinsor to Ethiopia, Dakey’s family ran out of food. When they reached Liben, one or her children joined more than 10,000 others currently being treated in MSF malnutrition programs in the camps. MSF also distributes food (such as flour and oil) to families so they can feed their other children as well.

The terribly overcrowded conditions in these camps heighten the risk of epidemics. With food, water, and sufficient sanitation in short supply, many of the children need care for persistent diarrhea and respiratory infections. Additionally, MSF launched a four-day measles vaccination campaign in the camps for 20,000 children under the age of 15. Measles is a highly infectious disease that can be lethal when coupled with high levels of malnutrition.

Overall, MSF now has some 700 local and 40 international workers staffing its programs in the camps and has sent in 855 tons of therapeutic food, conventional food, and medical material. It is also enlarging the health centers at the camps—both those that had been running for some time already (Bokolmayo, Malkadida, transit), and those that have recently been set up (Kobe and the pre-registration center).

The thousands who have left for Ethiopia in the last few months have done so mainly to escape drought and hunger. But it is the ongoing war that makes them believe they cannot return. “No, I don’t think we can go back to Somalia,” says Hadjia. “I don’t think we can find what we need there in the near future: peace and something to eat.” Her son is getting better, and she hopes soon to see her mother, who stayed at home until the last of their cows died and is now at the transit camp. But for the moment, all she can manage is a weak smile.