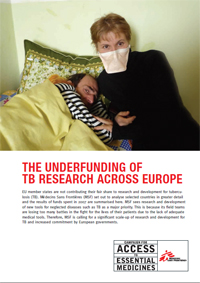 Stockholm, October 21, 2009 – The largest European countries are lagging far behind the United States in funding of tuberculosis (TB) research and development. As such they bear a responsibility for the painfully slow progress in finding new TB tests and treatments, according to a report released today by the medical humanitarian organization Doctors Without Borders/Médecins Sans Frontières (MSF). The report shows that all European countries in the analysis—with the exception of Sweden-- have failed to prioritize TB and are contributing to huge global underfunding at a time when 1.7 million people die every year from the disease.

“We are committed to treating people with multidrug-resistant tuberculosis today and we are even piloting new community approaches,” said Dr. Christophe Fournier, President of MSF’s International Council. “But we’re also facing up to the hard facts that we can’t treat TB properly with the drugs and diagnostics at our disposal and that means losing significant numbers of patients. That is why there is such an urgent need for European countries to mobilize more research activity on TB.”

According to the report, France and the UK are paying only 52 and 50 percent of their fair share, respectively, while Germany and Italy are doing much worse at 23 and 11 percent. With an average contribution of just over a third of their fair share, the European contribution is dwarfed by the US which is contributing two thirds of its fair share. Of the estimated 1.45 billion Euro required to fully scale-up TB research, only 350 million Euro (or 24 percent) is currently invested worldwide.

MSF is championing this cause because it faces increasing numbers of difficult-to-treat cases of TB in its programs in Eastern Europe, Asia and sub-Saharan Africa. TB also poses a direct threat to Europe more widely. Within the World Health Organization’s European region, including the former Soviet Union, there are 55 new cases of TB every hour meaning that more than half a million people develop TB each year.

The chronic funding neglect has led to the situation, for instance, where in developing countries, inadequate and outdated diagnostic tests fail to detect TB in about half of all patients who are in fact suffering from TB. For the treatment of multidrug-resistant TB (MDR-TB) drugs that had been abandoned because of side effects have been brought back into use because there are no other alternatives. Even with the best treatment available, MDR-TB treatment is only successful in less than two thirds of patients.

Under the Swedish presidency, the European Union (EU) has targeted antimicrobial resistance as a major health priority to be addressed. Unfortunately, TB and other neglected diseases are grossly underrepresented in this program. The MSF report - released just ahead of the EU’s European Development Days - demonstrates the urgent need for the EU to include TB as a priority in this program.

“When we ask the question are we doing everything we can, clearly the answer in Europe is no,” said Dr. Nils Billo, Executive Director, International Union Against Tuberculosis and Lung Disease. “There is an ambitious plan to improve MDR-TB treatment by testing new and existing drugs in clinical trials, but so far funding requests have come up empty. Changing the current reality will take political commitment for sustaining funding over many years. Europe needs to prioritize TB.”

The new report also highlights a highly promising and innovative financial mechanism that could speed up the development of a new point-of-care test for TB. Prize funds can eliminate the need to recover research and development costs through high final product prices. With approximately 50 million Euro, it would be possible to set up a prize that companies and research consortiums could compete for. Prizes like this have successfully been used by companies and governments to solve scientific or commercial problems. But so far no donors have stepped forward to fund this type of prize.

MSF treats around 30,000 people with tuberculosis in more than 80 projects worldwide.