MSF surgeon David Lauter blogs from DRC about the difficulties of working in a multilingual project. 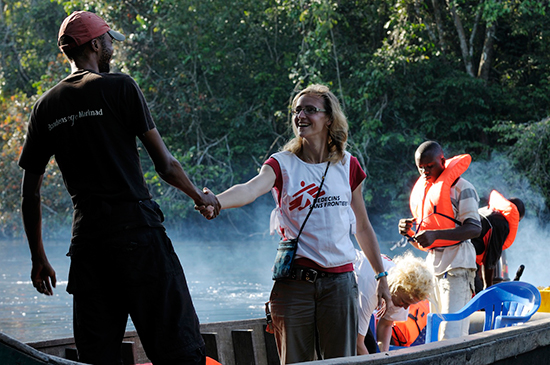 To find out what's required of MSF applicants, learn about benefits, and to apply, click here.

David Lauter is a surgeon based near Seattle, WA, where he has practiced general surgery for 20 years. Here he writes from his second assignment with Doctors Without Borders/Médecins Sans Frontières (MSF) in Rutshuru, Democratic Republic of Congo (DRC). Read more posts from David here.

It’s early evening and beginning to rain. It was warmer than usual, with a clear sky all day until dusk. Today I was thinking about when my kids were younger and we used to talk about which super power was the best. Not "superpower" as in a nation but super power as in being able to fly, super strength, x-ray vision, invisibility, etc. It was always fun when we did this, coming up with new, unusual powers and exploring the possible ramifications or limitations that might accompany each possible choice.

I only have a few more days in Rutshuru. I’m scheduled to be on overnight call at the hospital on Wednesday, drive to Goma on Thursday, then catch a plane for home from Kigali, Rwanda, on Friday. Just like my first mission, my time with MSF here has been very satisfying in a number of different ways. I have definitely had fun. I’ve enjoyed meeting people from different backgrounds, learning about the DRC, using surgical skills that I haven’t needed to use in years, and learning some new ones, all in the context of helping people. At times it has been a bit exciting and at times a bit difficult.

Some of the surgical cases have been challenging, including a tiny two-month-old with a strangulated hernia, a pregnant woman with a ruptured uterus, a 40-year-old woman with an unresectable tumor that was blocking her stomach (I did an operation called a gastrojejunostomy where you attach a loop of the small intestine to the stomach above the blockage so that she is able to eat and drink), and a gunshot wound to the leg where it was difficult to control the bleeding from some semi-large arteries and veins that had been divided. But I’ve been a surgeon long enough to know that you can come across challenging cases, whether in Africa or your home town. The surgery has actually been the easiest part of the assignment for me. The most difficult part for me has been the language barrier.

I should start by saying that I asked to come here knowing that the DRC is a Francophone country, that Rutshuru is a French speaking mission, and expecting that the Congolese medical staff would speak French and Swahili but little English. I had French classes in junior high and high school but was a disinterested student who could easily have received an award for “Least Likely to Speak French in a Professional Context” if there had been one. I have worked to improve my French skills ever since applying to MSF and did a passable job on my first assignment in the Central African Republic, another Francophone country, with the help of a Canadian anesthetist, a French-English internist, and an American logistics chief who were all bilingual and willing translators.

Currently my French is good enough to make basic conversation and have a discussion about a straightforward medical problem if we speak slowly and enunciate. But at the weekly Friday meeting when we gather to discuss bad outcomes and difficult cases, it’s impossible for me to fully follow the quick back-and-forth with the level of comprehension that I would like. I find it embarrassing to need to ask people to either repeat or simplify what they have just said, particularly if it seems to interrupt the flow of discussion. Expressing my medical opinion can require all my concentration to find the words (plus the occasional quick reference to the French-English dictionary app on my phone) and patience on the part of the listeners. At the residential compound, half of the residents are the Congolese staff and all of the other ex-pats are from France or Belgium. French is the spoken language at meetings, meals, evening gatherings and card games, and any other recreation. I go to bed exhausted not from a hard day of surgery but from my day and evening of French language immersion studies.

I am not complaining. The European ex-pats speak English to varying degrees and are always willing to help me with explanations and translation. We sometimes have conversations one-on-one in a mixture of French and English, sharing idioms and expanding each other’s vocabulary. Everyone has been gracious with me regarding the language barrier. But there is no doubt that our language difference is a barrier that keeps me separate and can even isolate me at times, despite the fact that we all like each other and are part of the same team, working and living together with a common goal. It makes me see just how difficult it must be to resolve an issue, whether it’s between individuals or countries, when there is a language barrier between two sides that have different agendas, values, and goals. The language of Esperanto was created in 1887 to help break down these international language barriers between nations and foster world peace. So far, after 125 years, it doesn’t seem to have worked very well. I have heard people not-so-jokingly say that English is the next Esperanto or that the entire world will be speaking Chinese 50 years from now. Frankly I find it hard to imagine people ever willingly giving up their native tongue for any international language. I plan to keep studying French and hope to someday be near-fluent, but I can’t imagine ever giving up the familiar comfort of my American English no matter how well I speak another language. I don’t see why the non-English speaking world would feel differently about their native languages.

So what is the solution to the language barrier? I don’t know. I’m not even sure that the diversity of world languages is a problem that needs solving. Maybe language diversity is like biodiversity, a natural thing that is best preserved. But I do know that I have a new first choice for the best super power: The power of universal conversation, to understand any other language as it is spoken to me, without thinking about translating the words in my head, and then replying in my own English, idioms and all, and being understood by whomever I’m talking with, also without translating in his head. That would be cool.