Floods in Nigeria: 'All their homes, crops, and food destroyed'

"Already, we’ve had reports of something like 25 to 30 villages that have been completely swamped by this water." 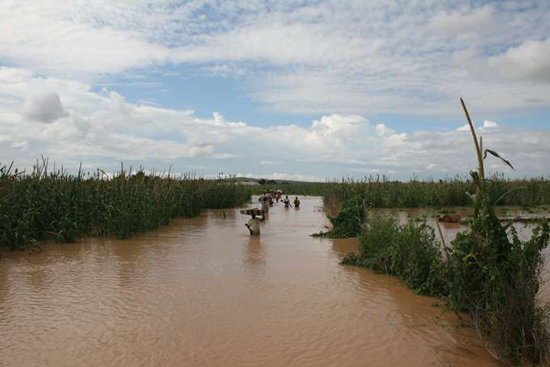 Chris Houston is a logistician with Doctors Without Borders/Médecins Sans Frontières (MSF) in the northern state of Sokoto, Nigeria. Flooding there, near Goronyo town, worsened significantly on September 8, when a dam on the Rima River failed. An unknown number of villages below the dam have been flooded and tens of thousands of people have been displaced. MSF is rapidly scaling up its response, and intends to provide water points and shelter materials to the displaced. Roads are submerged, making it difficult to assess the full impact of the floods.

Here, Houston describes what he saw on the ground: 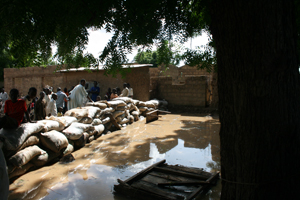 Inhabitants of a village in Sokoto State attempt to keep back floodwaters.

On the first of September last week, we were notified of floods in a place called Kagara, which is a small village, near Goronyo. As we approached, we saw thousands of people leaving the village, heading towards Goronyo town, and basically the inhabitants of the village had had their village and all their homes and all their crops and all their storage of food completely destroyed.

On the eighth of September things got a lot worse. The reason that Kagara had been flooded, we believe, is because people had opened the gates on the dam to release the pressure so that the dam didn’t fail, and so the consequences of that was Kagara getting flooded. But yesterday, we started receiving reports of much wider-spread flooding, and having gone there to look at it myself yesterday, what was very obvious was that the spillway from the dam had completely failed.

The dam holds back a lake; we’re talking a huge volume of water that around midnight, around 1 a.m. yesterday morning, burst through that spillway. It hit Kagara again, but it also hit all the surrounding villages. So now, the problem that Kagara faced is now being faced by countless villages. It’s difficult to make an accurate assessment of it because the roads are cut off and we’re relying essentially on word of mouth. But already we’ve had reports of something like 25 to 30 villages that have been completely swamped by this water. So the water came very rapidly, demolishing houses, demolishing the buildings that people use to store their food, and destroying the crops.

What we intend to do is to help as many people as we can, realistically. We think that we can provide good water and shelter materials for about 60,000 people. We want to provide them with access to clean water, we want to provide them with shelter materials, tarpaulin, with blankets and with soap and by doing that that will reduce the health problems, give them access to shelter, give them access to clear water.

Read Chris Houston's blog—"Chris is currently out of the office".