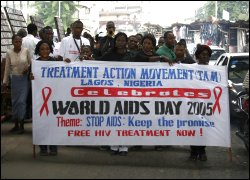 Abuja, Nigeria, December 6, 2005 - Having to pay for HIV/AIDS care increases the risk of treatment failure, according to new research from Doctors Without Borders/Médecins Sans Frontières (MSF) presented this week at the International Conference on AIDS and Sexually transmitted infections in Africa (ICASA), in Abuja, Nigeria.

The research revealed that in Lagos, Nigeria, among patients who had to pay for their own AIDS care, 44% had multiple treatment interruptions or took insufficient dosages due to lack of funds. The medical effects of this are extremely worrying.

Once enrolled in MSF's program, where care is free, these "treatment interrupters" had only half the immune system recovery — as measured by rise in CD4 count — compared to those receiving treatment for the first time.

"These patients are more vulnerable to AIDS-related infections such as pneumonia or tuberculosis," said Dr Jens Wenkel of MSF. "So forcing people to pay, and thereby risking treatment interruptions, can make this life-prolonging treatment less effective. If we want people to survive on treatment, we have to ensure access to free care."

The Nigerian government is insisting that public hospital patients pay for at least part of their own AIDS care including drugs and monitoring. "This is ludicrous. According to our survey, nearly 50% of these patients live on less than US$36 per month, yet they are paying between US$8 and US$67 per month for a recommended package of care," said Dr Wenkel.

To pay for their care, 39% of respondents reported borrowing or begging, while 18% said they had been forced to sell property. Many patients reported erratic consumption of medicines, including skipping or sharing doses, which can lead to insufficient drug levels in the blood.

The research was conducted between August and November 2005 among 122 patients who previously had to pay for their AIDS medicines and diagnostics and were later enrolled in the MSF program in General Hospital Lagos, Lagos Island.

A similar trend was found in Kinshasa, Democratic Republic of Congo, where a user fee proved to be a significant barrier to accessing care. When MSF abolished the clinic fee, the regularity of attendance in the ARV clinic improved considerably.

MSF currently provides antiretroviral treatment to more than 57,000 people living with HIV/AIDS in 29 countries. In Nigeria, MSF is treating more than 950 patients with ARVs in a comprehensive care clinic in Lagos.