Vanessa van Schoor worked for 13 months as Head of Mission for Doctors Without Borders'/Médecins Sans Frontières (MSF) project in Darfur, overseeing security, solving staff and supply issues, and balancing medical work with communication of the injustices witnessed by MSF teams. Here she talks about the risks that humanitarian aid workers face in Darfur and why the intense effort to help must continue. 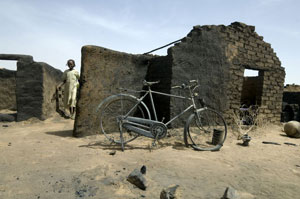 A child walks through the ruins of a house in South Darfur. If the inhabitants of this house survived, they may have ended up in Kalma camp, where MSF provides health care to displaced people. © Sven Torfinn

"In my first week as Head of Mission in Darfur, I rode out with others to one of the project sites. On the way, we were met by 20 men on camels, horses, and on foot, most carrying Kalashnikovs. They stripped us of everything we had: supplies, medical materials, and personal possessions.

It became clear to me that one of the most important parts of my job was to negotiate with commanders, authorities, and traditional leaders so that they would give us access to areas where we could provide health care to the people who most need it.

I realized that we take calculated risks, but when I talked to some of our local staff and heard what they had been through, I felt the risk we took to drive through a dangerous area was a very small one compared to what they have to face and go through every day.

Working in Darfur means dealing with many such incidents, and since the signing of a peace agreement in May 2006, the security situation has only gotten worse. Different groups are splitting up and forming new alliances, making it harder for us to know who's controlling what territory and who can guarantee our safety when we go there. The number of attacks on vehicles and aid workers has increased. This year, on average, one non-profit organization (NGO) or United Nations vehicle is attacked every day. Some NGOs have left Darfur due to the security problems, and there are fewer NGOs willing to go outside of the town centers. 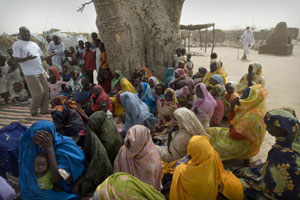 Humanitarian action is about one human being seeing the humanity in another person and seeing that the person is in need. It's an innate response of wanting to help. Despite the insecurity, our staff—both our international and Sudanese colleagues—want to stay and work. When there has been an attack, it's our local staff who usually tell us and who are the first ones ready to go out. When there was an attack on a village north of Nyala, family members of one of our local logisticians were among the victims. He was a key figure in negotiating access and reassuring the population about our presence there. We literally swept out the dust floor of an old school building, threw down a few pieces of plastic sheeting and started a clinic on the spot.

The people of Darfur are not weak at all. They have taken on more than you can imagine. And if you help one person, by treating that person or by giving medicine supplies or even a water bucket, the person will turn around use those things to help the community.

The people of Darfur are incredibly strong. I will never forget a grandmother who had received a blow to the head from an axe during a pre-dawn attack. She sat there calmly while our Sudanese doctor stitched her up. I was assisting him and when we were halfway through the procedure, we realised we had not given her any anaesthetic. She did not complain—she didn't even flinch or cry. When we had finished, she simply thanked us and left to take care of her family. These people are not weak at all. They have taken on more than you can imagine. And if you help one person, by treating that person or by giving medicine supplies or even a water bucket, the person will turn around use those things to help the community.

When I think of Darfur, the first thing that goes through my mind is the faces of the people I've worked with and the people who have come to our clinics. Life for the population is extremely tough. People often cannot leave the camp to go back and farm, reach a water pump or even find a safe place to sleep. However, they have incredible coping mechanisms and have risen above this crisis. Their strength enables us to overcome our own fears. 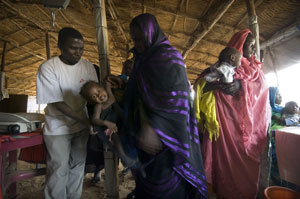 An MSF worker Darfur examines the baby of a displaced woman in Kalma camp. © Sven Torfinn

When I think of the other countries I've worked in, Liberia has finally elected a civilian president and East Timor gained independence after 20 years of oppression. I believe Darfur will come out of this too. One day, hopefully, the armed groups will get tired of fighting and people will be able to go home. Our role is to make sure that the leaders of the future get medical care or maybe even are delivered safely, so that they will survive and get everyone out of this extreme situation."

In November 2006, after leaving Darfur, van Schoor became an Operational Manager at MSF in Amsterdam where she is responsible for projects in Sudan, Pakistan, and Zambia. She has also worked with MSF in Burundi, Liberia, Mozambique, Myanmar (Burma), East Timor, and Ivory Coast.

Why I work for MSF

"I come from a medical family. We're originally from South Africa, but I went to school in Canada. We left South Africa when the situation in the country became increasingly violent and we needed a base outside in case we had to leave. I am fortunate to have received a good education in Canada and Europe and to have skills that can be used in Africa or other extreme environments. Sometimes that means I'm helping to set up a hospital, sometimes I'm writing reports or helping to organise a vaccination campaign, and other times I'm just wandering through a hospital at night, trying to figure out how we can squeeze more patients in comfortably. Working with MSF, I see that we not only save lives but that we occasionally get the opportunity to inspire other people. When I did my first field assignment in Burundi, I helped a doctor deliver a baby. The mother's nephew was outside and he told me: 'When I'm older, I want to become a nurse so I can work for MSF.' Years later, when the 2004 tsunami hit, my 8-year-old niece sent her savings saying she knew those kids didn't even have roofs over their heads. What I do has become a part of who they are and that makes a difference."

Darfur is one of MSF's largest missions with 120 international and more than 1,800 national staff working throughout an area the size of France. On average, MSF teams there perform 581 consultations per month. In Darfur, as in many other projects, MSF works with staff from the area or other regions in Sudan. The ratio of international staff to Sudanese staff in Darfur is 1 to 15.