Gaza: "Eighty percent of my patients are children" 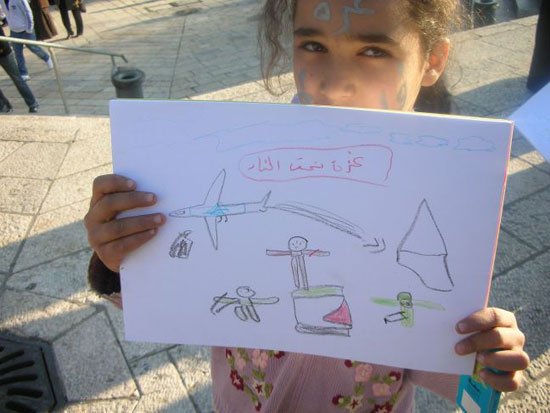 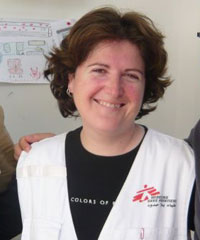 A year after the war in the Gaza Strip, civilians continue to be deeply affected. Elina Pelekanou, a Doctors Without Borders/Médecins Sans Frontières (MSF) psychologist in Gaza, speaks about what she has seen.

"My first patient was a woman whose family was destroyed during the war. Fifty relatives died – they were at the wrong place at the wrong time. She had to walk, barefoot, over glass and stones, with a white flag, carrying her children, one of whom had sustained a leg injury.

Her husband beat her, too. She said that she wished she had died with her relatives. She was very weak and could not communicate or concentrate well. She didn’t understand what psychotherapy could do for her and she stopped coming after two sessions. I went to her home and she was pleased to see us again. The MSF doctor treated her depression and the social worker provided her hygiene kits and food aid.

Eighty percent of my patients are children

I expected that I would have to treat many cases of depression and knew that I would have to focus on children. Patients were affected by the war in general – the planes, tanks, bombing, firing, deaths and injuries that they witnessed. They have nightmares, problems concentrating, lack of appetite, anxiety and flashbacks. The children suffer from bedwetting and are failing in school. Their parents' difficulties have repercussions on them. Others have been affected by a particular event or a specific loss—one or several children, one or both parents or other family members. Some have come close to death or seen dead bodies.

Strong communities, religious and family ties have helped them hold on. While the men can leave the house and visit friends, the women must stay at home. They lack social contact. Eighty percent of my patients are children. You can treat mothers through the children. Most of my male patients are amputees, have suffered severe wounds or come close to death.

Amputees have not only lost a limb or a hand, they've lost their role: professional, parent, housewife, head of household for the men. If you have to seek treatment and need help to perform the simplest tasks, how can you maintain your role of supporting the family? One’s masculinity is affected. And then what will happen if there’s another war, like the one in January, when you're already mutilated? How will you help your family? If the situation remains calm, the amputees will be able to adapt to their new life and establish new goals, but they will never forget. The trauma will remain written in their flesh.

Economic problems related primarily to the embargo often result in violence. Unemployment creates pressure for the men and produces domestic violence. It is a real social problem here, but it’s difficult to deal with. The women are very isolated. They don’t speak up. They hide the truth and the situation worsens. There is a real gap, but MSF cannot fill it. That would require considerable resources that extend well beyond psychological treatment.

The vast majority of the population in the Gaza Strip is poor and destitute. Those who lost a house cannot afford to pay rent and are living in the ruins of their former home, with all the memories—good and bad—connected to it. Some are living in tents or have moved in with friends, relatives and family members, but they have to move constantly. They have lost everything—roof, privacy, dignity and social status. And building materials are prohibited from entering.

How can you think about the future when you don’t even know if you'll be alive tomorrow?

Just after the war, MSF offered special psychological counseling sessions to aid workers, including ambulance drivers and firefighters. That population was also very traumatized. They risked their lives and were targeted themselves. They saw horrible things.

They were overworked, too—they worked as hard during 22 days of war as they would in three years of normal activity, but they couldn’t allow themselves to cry that whole time. Men are not supposed to cry in this culture. And women aren't supposed to get angry. MSF staff were also debriefed so that they could get things off their chest and feel they were being supported after all that they endured. Everyone was, and still is, exhausted. Some lost someone close to them, lost their house or prepared their children to die.

After the war, people came on their own to meet with us, via word-of-mouth or referral from other NGOs. They sought psychological support initially and, in the end, primarily for their children, and material aid as well. By the end of April, there were 90 people on the waiting list. We had to freeze the list and increase the number of psychologists. I was alone at the beginning but now there are five of us. We've been able to accept new cases recently.

People no longer believe in the future. They have no hope and no goals because they have no resources. How can you think about the future when you don’t even know if you'll be alive tomorrow? Everyone is afraid that the war will resume. False, alarmist rumors are frequent. No one expected the events of January – a war that began in the middle of a weekend day. NGOs, hospitals and schools were attacked. No one was safe.

Our therapy requires an average of five or six sessions, 15 at most and sometimes more, but that is unusual. We monitor the moderate and severe cases and our patients know that even after their file has been closed, they can always come back if necessary. Gazans are very strong and have considerable resources, but relapses are common. And given the current needs, a single NGO offering clinical care can’t possibly meet all of them."

In the six months after the war's end, MSF conducted 1,155 mental health sessions and treated 198 patients. At the same time, 369 patients participated in group or individual consultations.