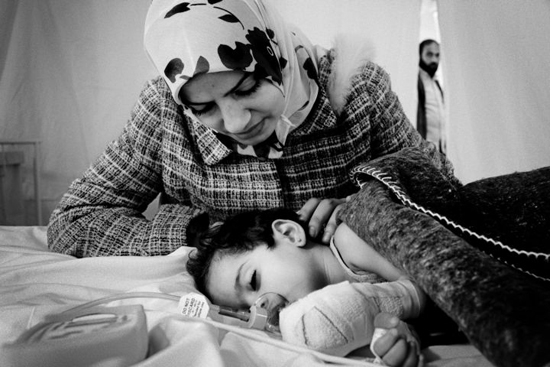 A mother watches as her 18-month-old daughter is treated for a burn to her arm in an MSF clinic. After enduring three weeks of intense fighting with nowhere to run, many people in Gaza need at least basic mental health care.

While many wounded people still require medical care, particularly surgical procedures or post-operative care, the population in the Gaza Strip is also in need of social and psychological assistance.

Twenty wounded patients underwent surgical procedures in the Doctors Without Borders/Médecins Sans Frontières (MSF) facility in Gaza City this week. Half of the patients are under 15 years old, including seven wounded children under five. The surgical team carried out wound debridement (the removal of infected or dead tissue), skin grafts and removal of external fixators. The surgical team will also apply dressings for severe burns.

More patients are expected to arrive in the coming days and weeks, as extensive MSF evaluations in the Gaza Strip show significant needs for secondary and specialized surgery for people injured during the first three weeks of January. MSF identifies patients through teams that go door to door in the areas most affected by the conflict, or through the medical staff in our clinics. Palestinian hospitals also refer patients to the MSF facility, and radio announcements are broadcast, informing the population of the surgical care available.

Some 100 dressings and physiotherapy sessions were carried out in MSF's Gaza City clinic for post-operative care on January 29. There has always been a large number of wounded people requiring this type of medical care in Gaza, and the number has increased since the recent Israeli military operation. The Gaza clinic, another MSF facility located in the south of Gaza in Khan-Yunis, together with three mobile teams, used to treat an average of 240 patients per month. Now triage for new admissions has been set up and the less severely wounded are referred to primary healthcare centers to make room for the recent war wounded. A third clinic for post-operative care is due to open in the north of Gaza to provide assistance to patients in east Jabalia, Beit Hanoun and Beit Lahiya.

Psychological effects of the insecurity

Everyone in Gaza was exposed to the insecurity during the Israeli army's incursion, as there was no safe place nor any possibility of escape. “It is too early to evaluate the psychological impact of the latest bombings and fighting. For the moment, the psychological effects are normal given the period of intense insecurity they have endured,” said Angels Mairal, coordinator of MSF psychosocial programs. “Nightmares, insomnia, weight loss, irritability, poor concentration, hyper vigilance, or psychosomatic signs like headaches and stomach pains often occur after periods of high stress. If these persist more than one month they may be considered symptoms of post-traumatic stress disorder or another psychological disorder.”

A psychiatrist has joined the MSF team of two clinical psychologists in Gaza. For two or three months, they will use discussion groups to focus on the needs of the MSF emergency teams who were particularly exposed over the past few weeks. They will also continue therapy sessions with regular patients. Even in the West Bank, MSF psychologists have observed a deterioration in their patients.

During the previous weeks, there were no requests for psychological care from the 36 regular patients who were in the MSF mental health program. “All they were thinking about was survival,” Angels said. “The population was in search of practical advice, like where was the safest place in the house for the children. The next priority was to cover basic needs, like finding a new place if their house had been destroyed." Social workers help patients in the psychosocial program find some support through referrals to different organizations providing social assistance.

An MSF psychologist confirms that, as always, children are the most vulnerable: “There is the double effect of the violence and the stress on children. Like everyone else, they are directly affected, but they also suffer from the incapacity of their affected parents to provide them with the support they need. They face increased difficulties, but their parents are less able than before to assume their role towards them.” Even during periods of less intense violence, the economic and political situation makes it difficult for parents to provide their children a sense of security.