Interview with MSF's head of mission in the Palestinian Territories 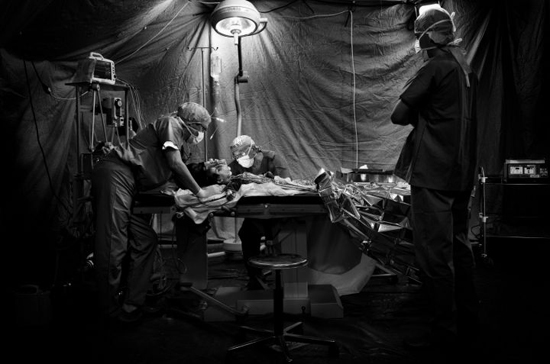 In the Gaza Strip, MSF doctors perform surgery on an 18-month-old with burns to her arm.

After last January's war, heightened medical and health needs prompted Doctors Without Borders/Médecins Sans Frontières (MSF) to expand its activities to address shortfalls in specific areas, including post-operative care, physical therapy, mental health care and surgery. Jean-Luc Lambert, MSF's head of mission for the Palestinian Territories, assesses the activities of this post-war year and MSF's plans for the future.

How did MSF respond to post-war needs in the Gaza Strip?

"In the days immediately Operation Cast Lead, MSF opened an emergency surgery center in two inflatable tents to treat the inflow of trauma cases. We handled orthopedic and reconstruction surgery for patients wounded during the war and who needed multiple surgeries. This allowed the ministry of health's overburdened facilities to concentrate on emergencies. This emergency and follow-up program, which followed the critical phase, lasted from January 2009 to July 2009. We performed a total of 84 orthopedic surgeries and 278 plastic and reconstruction during that time. 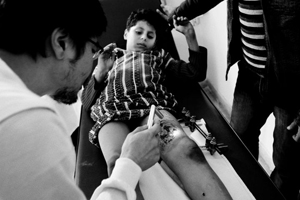 A 10-year-old injured during a bombing receives treatment from MSF doctors in the Gaza Strip.

To meet the needs for post-operative care and physical therapy, MSF set up three clinics and organized eight mobile teams dedicated to those services, which improved patients' chances of recovering from surgery.

In 2009, our teams treated 1,116 patients and conducted 54,609 treatment sessions. Adding a microbiology component was important to our post-operative program because antibiotic resistance is very high in Gaza. Having access to fast and effective laboratory tests allowed us to prescribe the proper medications and, in general, improve treatment for patients with infected wounds.

The war's psychological effect was dramatic, particularly for children, and we had to expand our team of psychologists because of the inflow of patients. This year, we admitted 300 patients into our mental health program. We provided them a short course of treatment based on a maximum of 10 sessions. At their final session, 78 percent were assessed as 'recovered or recovering'. Fifty-seven and one-half percent of the patients participating in this program were under 12 years of age.

The pediatric program that opened in February 2008 in the northern Gaza Strip, in response to the general deterioration in the availability of care during 2007 and to patient overload in the only pediatric referral hospital, closed in September 2009 Other organizations are now working in that area. More than 11,000 medical consultations were held over 19 months.

MSF's projects for the coming year

During the last war, MSF was able to respond quickly by providing its Palestinian medical and paramedical staff with emergency kits so that they could care for patients living in their immediate neighborhood. We could adopt a similar strategy again if necessary. Likewise, MSF's inflatable hospital tents have been dismantled and stored and are ready to be redeployed if needed.

We are going to expand the admission criteria into our post-operative care program for severe accidental burn patients referred by the Al Shifa hospital, which is the only one throughout the entire Gaza Strip with a major burn unit. This will be a temporary change and will be based on our capacity. These patients require specialized care and physical therapy. We will open a fourth clinic in Rafah, in the southern Gaza Strip at the Egyptian border, in order to be more accessible and ease the burden of the other facilities in the area.

The Gaza population has experienced significant psychological trauma. Many families and children require psychological support and psychotherapy. Many patients live in areas where MSF is currently unable to work because of travel restrictions and safety concerns. Those people need care. Next year, MSF will do what it takes to reach these isolated and suffering patients. We have hired an additional psychologist for that purpose.

War wounds and their after-effects—scars, contracture and disfiguration—are testing a poorly-equipped health system, which cannot respond adequately to the large number of victims. To meet the needs for plastic and reconstructive surgery, MSF has proposed to set up a program that will allow these individuals to recover both their dignity and functional ability.

In 2010, we will propose a plastic surgery program in cooperation with the ministry of health. We will work on a three-month rotational basis in a hospital in the north, another facility in the central region, and a third in the south. The waiting list already includes 55 patients. We expect that others will be referred by our own post-operative care program."

Review of our emergency activities

MSF responded immediately to Operation Cast Lead by providing support to Gaza hospitals and donating medical supplies and medications. Intense bombing and lack of security prevented our clinics from opening during the war. We provided some of our Palestinian staff with emergency medical kits so that they could offer treatment in their immediate neighborhood. Our Gaza City clinic remained open but few patients were able to reach medical facilities.

On January 3, the security situation worsened as the land offensive and urban guerrilla fighting began. Israeli forces finally declared a ceasefire on the 18th. A surgical team and 21 tons of material, including two inflatable hospital tents, reached Gaza City.

MSF decided to focus its activities on specialized and secondary surgery with five to eight operations per day. Some 332 additional patients were treated in our post-operative and physical therapy program. Mental health care was also expanded, specifically for aid workers, including ambulance drivers and first-aid providers, who were particularly exposed during the war.