On the Ground in Gaza: "The situation was completely chaotic" 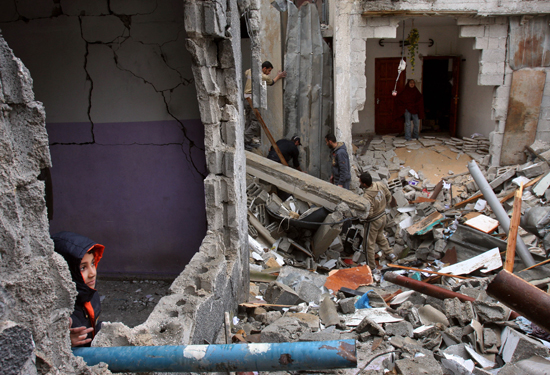 Palestinians search the rubble of a house that was destroyed during an air strike in Rafah refugee camp, southern Gaza Strip, on December 29.

The violent conflict in the Gaza Strip has been extremely intense for the last four days, and hospitals have been struggling to meet the urgent needs of large numbers of wounded people. A Doctors Without Borders/Médecins Sans Frontières (MSF) doctor* in Gaza spoke on December 30 about the situation there:

“Today in Gaza, the official numbers are about 365 dead and more than 1,780 wounded; these are official numbers which we got from the Ministry of Health here in Gaza. This includes children, women, and old people.

Shifa Hospital is the main referral hospital in the Gaza strip. And it is the hospital that received the biggest number of wounded and the most dead during the first 24 hours [of this week’s outbreak of violence]. They received 500 wounded in the first 24 hours, and about 180 dead.

They did 150 operations during 24 hours, the urgent operations, the emergency lifesaving operations. So all of the surgeons were occupied. The situation was completely chaotic in Shifa Hospital. They were operating on the ground; they were stabilizing patients on the ground. They were using the corridors for more space.

Buildings near the hospital were hit with missiles, and when a building is bombed, the neighbors are the ones who are immediately affected. The hospital windows that were broken in the explosions caused cuts and wounds mainly to the children who were sleeping.”

Lack of Medicines, Supplies, and Transport

“They had a lot of shortages. As you know, the Ministry of Health in Gaza and many of the hospitals in Gaza have been suffering for more than a year from shortages of a lot of medications and materials. And with this many needs over the last days, there was a lack of many lifesaving drugs and materials.

MSF is in direct contact with the emergency rooms, the operating rooms, with the surgeons, with the pharmacists of all the hospitals in Gaza, and we made donations to the main six hospitals there. We gave lifesaving drugs, some solutions, disposable materials, dressing kits, and burn kits.

We informed the hospitals that we have a postoperative program and we have a clinic ready to receive patients who need postoperative care – medical and nursing services. And, unfortunately a lot of patients called us but the problem was transportation; they were not able to reach our clinic.

Now there is no movement in most Gaza city streets – cars are not moving and people are afraid to move.

But even with this difficult situation, we have had patients. We received patients today in the clinic for postoperative care, and I hope in the coming 24 hours, we will be able to send our cars to provide services to patients in their homes.

After sunset, people are not moving from their houses. That has been a big problem now for three days—that no one can move to go to the hospital for an emergency. Even if they go for normal emergency, the hospital will not accept them because they are only focused on treating victims of the strikes and the bombings and shelling.”

“I met a lot of doctors, surgeons, nurses, who are completely exhausted. You can see the exhaustion on their faces. They are depressed. They also have their normal lives, their families. You can feel the depression and the shock and the fear and sadness in each person in the Gaza strip. And I saw it today on the faces of the surgeons and the nurses and the patients … everyone.

So everyone in Gaza is preparing themselves because after 9 o’clock the sounds will start and the houses will be shaking, the windows will be broken, as usual, every night.”

* Name has been withheld for security reasons