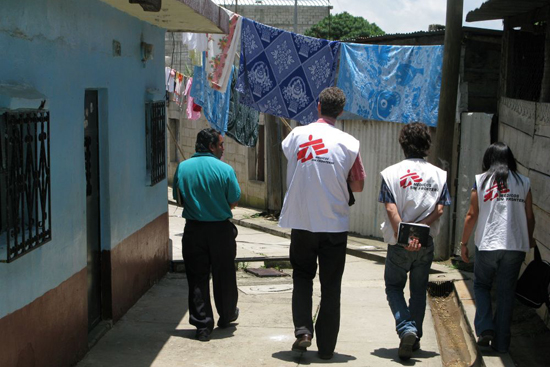 Sexual violence affects thousands of people every year in Guatemala. But, there has been little assistance provided to survivors of sexual violence by the national health care system, so Doctors Without Borders/Médecins Sans Frontières (MSF) operates a clinic in Guatemala City specifically to treat these patients.

Maria will never forget this day in November for the rest of her life. She was sitting in a bus, five blocks away from her home, when a black car blocked the road. Two masked men entered the bus and put a gun at Maria’s head. “They forced me to go with them, they blindfolded me,” she later told the MSF psychologist. “They took me to a place I didn’t know. There were seven of them. They beat me up. Then they started to rape me.”

Maria is a survivor of sexual violence, one of the 10,000 people who report being raped in Guatemala every year. The actual numbers are unknown since many victims never come forward. MSF set up the program in Guatemala City in 2007, after finding that the national authorities lacked the resources and the will to provide survivors of sexual violence with access to treatment. MSF now treats 100 new patients every month, both medically and psychologically. In addition, through education and communications, the team in Guatemala City is showing the authorities, the medical community and the Guatemalan public that sexual violence is a medical emergency and that treatment is possible and available.

In Guatemala, a history of violence 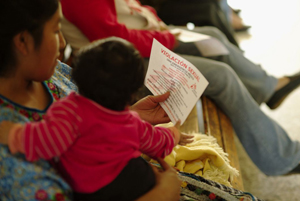 A patient at the MSF clinic for survivors of sexual violence reads about MSF's treatment services.

In the last years, violence has increased significantly in Guatemala. In the beginning of 2009, there were about 20 killings every day; most of them appeared to be gang-related. About 40 bus drivers alone had been killed within three months because their companies hadn’t paid bribes. The majority of those killings happen in the capital.

“We have a history of 30 years of civil war which has not been solved,” says Mayra Rodas, psychological coordinator of MSF in Guatemala. The ones who suffer most from this violence are women: “We live in a machismo and patriarchal society. Women are treated as objects which can be taken. To be a woman here is like being garbage. This is what our patients tell us.”

That was how Maria was treated. After a day of unbelievable cruelty, one of the men helped her escape. “I was told that if I pressed charges they would kill my family” she says quietly. “So I didn’t.”

The doctor in a local clinic referred Maria to the MSF clinic for victims of sexual violence. “Right away, they gave me about 15 pills,” she said. “I didn’t like the pills and even less the injections. I was really nervous about whether I was pregnant or HIV-positive. But thanks to god and the medication they gave me, the results were all negative.”

Sexual violence is a medical emergency. “It is not widely known that we can actually prevent HIV even if the patient has been infected,” says Dr. Silvia Dubòn, a physician working for MSF. “It’s important to come within 72 hours after the attack. If we start giving anti-retroviral medication within this timeframe, we can prevent the spreading of the virus in the body.” Unwanted pregnancy can also be prevented within five days after the attack, and Hepatitis B within three months. Other sexual transmitted diseases, including syphilis, Chlamydia and gonorrhoea can be treated at any time.

Treating Maria against infections was not the difficult part of her recovery. The emotional trauma goes much deeper and takes more time to heal. “It just kept coming back, everything they did to me. I was thinking of it while I was eating. So I stopped eating. I was dreaming and it all came back to me, then I woke up and I couldn’t fall asleep anymore. That’s when I met with the MSF psychologist and then it got better. She helped me a lot,” Maria says.

“Often I have to say that I don’t have a pill or a vaccination to make you feel better,” explains Wendy Mérida, a psychologist with MSF in Guatemala. “It is a process of getting to know your feelings so that you can talk about it. Every person has a totally different story. We try to enable the patient to express herself.”

Learning to talk about rape is an important first step to recovery for the patient, as well as for the society. “In Guatemala nobody speaks about sexual violence,” says MSF head of mission in Guatemala, Fabio Forgione. “Survivors are stigmatized and they cannot easily find treatment in Guatemala yet. There are no resources and too little comprehension of patients’ needs by the doctors.”