Guinea: Gearing Up for Malaria Season

Malaria is one of the leading killers of young children worldwide, even though it is both preventable and easily cured. Doctors Without Borders/Médecins Sans Frontières (MSF) treated 2.5 million people for malaria in 2017.

Malaria tends to come in waves, seasonally, or at specific times of the year in zones where it is endemic. At any given time of year, there is a “malaria peak” somewhere in the world. We know that malaria season will come, and we know that it will cause the deaths of thousands of children.

Our teams are constantly asking how can we better prepare for the approaching wave of malaria cases in areas where health systems are poorly equipped to manage the problem. Some of the answers may be found at a new MSF malaria project in Kouroussa, Guinea, where teams are busy preparing for the malaria peak that strikes every year between June and September.

The Lives Behind the Data

According to official figures, last year malaria killed one person out of the more than 300,000 inhabitants of Kouroussa prefecture in Guinea. “Yet, the first time that I visited the hospital, in October 2016, I was there for only two hours, and in that time a child died before my eyes,” said Dr. Ibrahim Diallo, MSF head of mission in Guinea. “Of course, this set off alarm bells.”

The confirmation came two months later, following a retrospective mortality study carried out by MSF: out of a sample of 2,080 people, we recorded 62 deaths, half of which were due to malaria. With children under five, malarial fever was the cause of death in 80 percent of the cases, many of whom died in the community. The statistical oversight hid the true scale of the problem, but the pain of families who had lost their children was unmistakable.

This difference between statistics and reality raises the issue of epidemiological monitoring. If we don’t know why children are getting sick and dying, how can we know if an epidemic is approaching or if a virus has appeared in the community? That was the case three years ago, when Ebola spread for weeks undetected in a rural part of Guinea—leading to an international epidemic that resulted in more than 14,000 deaths. Even more immediate than this global public health issue, how can we ensure that more children survive in Kouroussa? 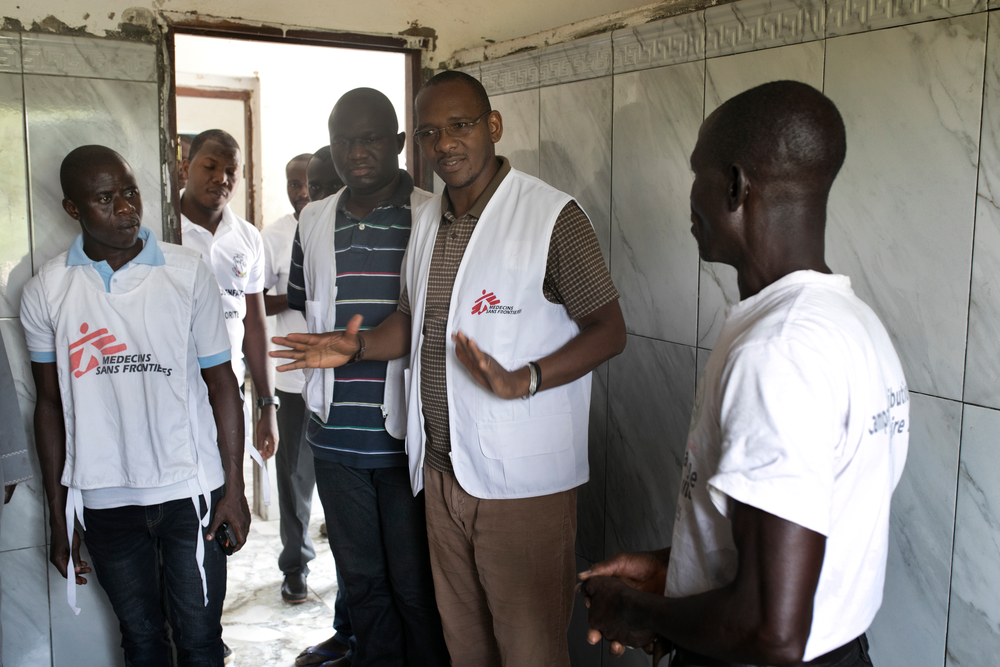 There is no violent conflict in Guinea, yet it is one of the leading countries of origin of migrants headed for Europe. For people here, especially the young, there is not much hope of improving their daily lives.

Men and women scour the earth for gold at rudimentary mines found all over the region. They hope to be among the few to get rich, and not one of the many who come back with empty hands and stomachs after long days spent in difficult and dangerous working conditions. Most able-bodied adults here use up their strength and energy in the mines. Small family fields for growing crops are often abandoned, and generally do not provide enough food for people to be self-sufficient. The area has some of the highest levels of malnutrition in the country.

The often perilous “hunger gap” between harvests coincides with the malaria peak, worsening the dangers. “Malnourished children are even more likely to develop serious and potentially deadly strains of malaria, and children weakened by malaria are at serious risk of malnutrition. It’s a real vicious cycle,” explains Dr. Diallo.

Preventing the Next Tragedy

It’s 8 p.m., and Fatou has just arrived at the hospital. Her five-month-old son, Moussa, has had a fever for a week now. She bought paracetamol from the market, but it didn’t help. So she ended up going to the health center near her home, which referred her to the hospital.

The next morning, at 9 a.m., Dr. Ulrich of MSF is kneeling by Moussa’s bedside. He has spent the past 45 minutes trying to resuscitate the baby. “No, no, I beg you, don’t fall asleep,” he murmurs as he presses lightly on the oxygen cylinder. But it’s too late. Malaria has begun attacking Moussa’s brain. A few hours later, Fatou goes home in a motorcycle taxi, her son’s lifeless body pressed against her heart.

MSF was not able to prevent this unnecessary death, as Moussa arrived too late to be treated successfully. But our teams are working hard to prevent other deaths now and in the future.

Even though the malaria peak has not yet started, the provincial hospital’s pediatric department is full, with the support of MSF. When we began its operations in July 2017, at the height of last year’s malaria peak, there were many empty beds in the pediatric department. The shortage of patients was less a reflection of the lack of need as it was the lack of hope from parents that the hospital would be able to help their sick child.

The hospital had a generator but no money to fuel it. If a patient in intensive care needed attention during the night, hospital staff had only the light of their mobile phones to examine him. And even then, only if staff were available: the provincial hospital, supposed to serve a population of more than 300,000 people, only had three doctors, including the hospital manager and a surgeon.

Over the past nine months, MSF has provided greater material support to the hospital. Now there is electricity 24 hours a day, and 72 national and international staff are able to provide care and support their Guinean colleagues. MSF also introduce new management techniques. “In the beginning, we lost patients because there was no triage system for hospital admissions. Rather than giving priority to the most urgent cases, it was a case of first come first served,” explains Dr. Ulrich. In six months, these new measures have helped to halve the mortality rate of children in the hospital.

This is only the beginning. The malaria peak will hit again in June. After months of negotiations, MSF received permission to place beds in the neighboring treatment center, which was built to admit patients in the event of another Ebola outbreak. The building, which was brand new, had been empty for months and was beginning to fall into disrepair. (Meanwhile, the hospital where we were working had not been renovated in more than 30 years.)

The deadly wave of the malaria peak cannot only be contained by treating serious cases in the hospital. Little Moussa would probably still be alive today if only he had received an accurate diagnosis and anti-malarial treatment a week earlier. “The goal is that there are fewer serious cases, quite simply. And for that, basic care needs to be available closer to those who need it as early as possible,” explains Dr. Diallo.

To achieve this goal, MSF provides financial support and human resources to the rest of the health care system across Kouroussa region. The setting: five health centers in the prefecture, often housed in small buildings and run by a nurse and several health technicians. The aim: to make health care free of charge for children under 5. The results: in a month, the number of consultations in health centers has tripled.

The MSF mortality study showed that in 27 percent of deaths, the family had never seen a health care professional—with lack of funds cited as one of the main reasons. Almost half of those who had looked for care needed to borrow money or sell possessions in order to afford the luxury of health care.

Anti-malarial care, subsidized by several donors, notably the Global Fund, is officially free of charge. But in an under-financed healthcare system, every service can charge fees as the main source of revenue to maintain the infrastructure, stock up on equipment and medication, and pay the staff. The underlying problems persist unaddressed: no money for the upkeep of infrastructure and underpaid staff, often with little training and poor support, straining under the heavy workload. “Yet these health centers should play their full role in the health care system by having the ability to treat simple cases, and thus preventing the hospital from being overrun,” says Dr. Ismael Adjaho. “We hope that the training, supervision, and daily support provided by our teams – in addition to the financial support – will increase health care capacity when the malaria peak comes along.”

Rooted in the Community

Sekouba Souare, a community health worker trained by MSF, is on the front line of the health care system in the village of Kakidi. Sekouba has only a basic level of education, but after training and close supervision from MSF teams, he can now identify the most common pathologies among children – diarrhea, malarial fever, and malnutrition. He can talk to his neighbors about how to avoid disease and also provide basic first aid. This kind of basic first aid can help avoid catastrophes like Moussa’s death. The boy was cared for at home for too long due to a lack of access to health care. Malaria can be diagnosed with a test that is as easy to use as a thermometer for fever; in its simple form, the illness is just as easy to care for. But malaria first needs to be identified, and the medication must be available for free for the children who need it. 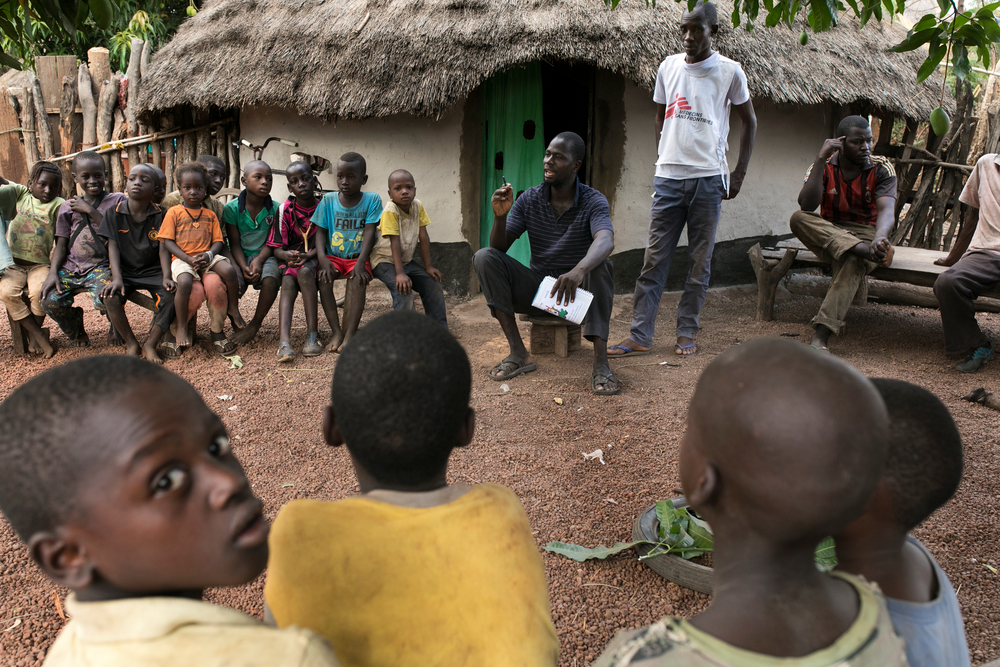 In Sekouba’s office – a small room made of cement just a few square meters in size – he takes out an appointment diary. When a mother brings her sick child to Sekouba, he gives the child a quick malaria test and some basic medication if needed. He measures the child’s arm to check that he isn’t dangerously malnourished, and provides rehydration salts in cases of severe diarrhea. Above all, he has been trained to quickly identify children who are too ill for his limited skills, and refers them to the health center around 10 kilometers away. This enables mothers, when their children begin to fall ill, to decide if they can afford to make the financial sacrifices needed to pay the few francs for a medical consultation at the health center and support the journey there. From the health center, MSF offers a free ambulance service to ensure that serious cases arrive at the hospital as quickly as possible.

“Our goal here is simple: that there are fewer children who die while we’re here, but also, after we’ve left. We have given ourselves five years to achieve this,” says Dr. Diallo.

In the meantime, our teams will check back to ensure that we are making progress in responding to the malaria peak in Kouroussa this season.