The number of new cholera cases is decreasing throughout most of Haiti, but with a rainy season approaching and many underlying factors still unaddressed, there's no room for complacency. 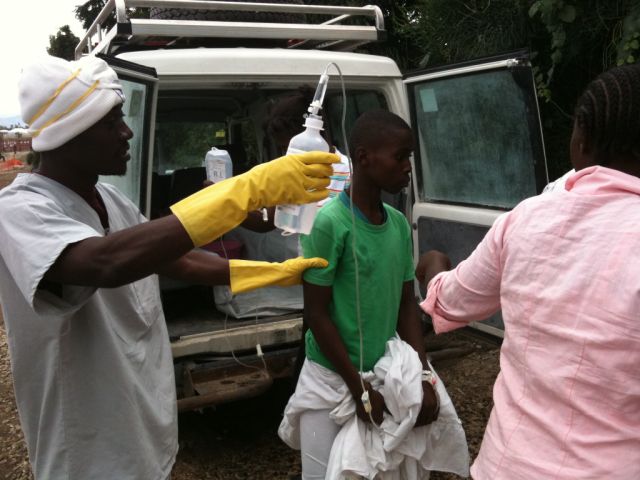 A patient arrives at MSF's CTC in Tabarre.

MSF is preparing to reposition its response to the cholera epidemic in Haiti. In the coming weeks, the international medical aid organization will hand over responsibility for treating cholera patients to other national and international actors capable of assuming that task.

MSF's medical teams have treated more than 110,000 people since the epidemic began, in addition to its full slate of non-cholera related activities.* In the week ending February 6, patient numbers fell in six of the country's eight departments. The numbers tripled in the southern part of the country during that same week, but, overall, the total number of cholera patients recorded at MSF facilities has fallen by nearly 70 percent compared to the start of the epidemic. Whereas 12,000 presented in one week in October, for instance, 3,118 did so in one week in early February. In Artibonite, the medical team treated close to 4,500 cases per week when the disease first hit, but the current figure is approximately 500 per week. MSF has also observed that cholera cases are distributed unevenly across the country.

As a result, MSF is adjusting its programs in order to respond appropriately to the current situation, reducing the size and number of treatment facilities. Caroline Séguin, MSF’s emergency coordinator for the cholera response, explains that the decision will be based on two factors: the epidemiological situation—that is, the change in the number of cases treated—and the availability of nearby treatment facilities.

The sites taking over for MSF will receive donated medicines and medical supplies. "We have made preparations to withdraw," says Dominique Bernard, MSF's project coordinator in Port-de-Paix. "We are making sure that the facilities that will take over are ready to absorb the cholera cases. After we leave, an MSF team will conduct epidemiological monitoring of the situation. We are in touch with these facilities and have asked them to contact us if they receive an influx of new cases."

Since the epidemic began, MSF's medical teams have treated more than 110,000 cholera cases at 47 treatment centers (CTCs) around the country, or approximately 60 percent of the cases country-wide. MSF has established a hospitalization capacity of 4,000 beds and the mortality rate in its facilities is now less than 2 percent of cases.

The drop in new cases is due, in part, to the dry season in Haiti, which is less favorable to the spread of the disease. In addition, the isolation of patients in cholera treatment centers, treatment of contaminated sites, chlorination of water at the sites, and the extensive public education efforts by MSF and other actors have had a positive impact on the course of the epidemic. "At the beginning, people didn't know anything about cholera and were very frightened," Séguin says. "It's quite different now. They recognize the importance of the chlorination efforts."

But close monitoring of the situation is still required because cholera is now endemic in Haiti and the rainy season will start soon, increasing the risks of a resurgence of the epidemic. Séguin is cautious: "The numbers can rise and fall. That's why we will continue to monitor the situation in Haiti in the coming months. We are ready to step in if the number of patients rises again."

*MSF’s operational budget projections for Haiti for 2011 are 46 million euros ($60.7 million) to maintain a network of six private hospitals in Port-au-Prince, with a total capacity of up to 1,000 beds, and to maintain support of two Ministry of Health hospitals. Three of the facilities in the capital will be newly constructed in 2011—including the only functioning burn treatment unit in the capital—replacing temporary facilities established in the aftermath of the earthquake. Outside the capital, in Léogâne, MSF will continue to run a newly constructed 120-bed general hospital. Among MSF’s operational priorities in Haiti are obstetric, emergency, and trauma care.