An MSF nurse describes training health workers to deal with the ongoing cholera outbreak in Haiti. 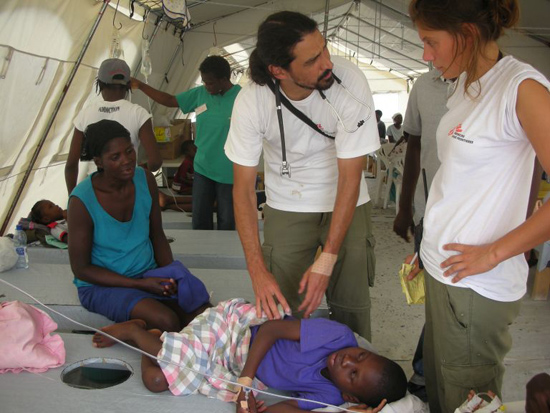 Doctors Without Borders/Médecins Sans Frontières (MSF) has mobilized significant resources, particularly human resources, to address the cholera epidemic that broke out in Haiti in late October. The organization has put health workers through an accelerated training program that covers treatment protocols, rules of hygiene, and more. Régis Lorguilloux, an MSF nurse and medical training manager, explains.

This was the first time Haitian health workers had ever dealt with cholera, as the country has never experienced it before. MSF provided training to improve treatment. What was your role?

The first task was to calm people's fears and educate both the population and health workers about the disease. In early November, we began distributing the same message to health centers, churches and radio stations and by text: cholera is an illness that can be treated easily. If you become ill, you should go to a treatment center as soon as possible. We also disseminated a prevention message about the need to wash your hands before and after eating, the need to chlorinate water, to wash food and cook it thoroughly. In December, we observed that some people were still not coming to treatment centers, so we re-broadcast the information in certain areas—primarily in Artibonite, where MSF was treating cholera patients—provided ambulances. We emphasized that treatment was free and continued to disseminate these messages throughout the course of the epidemic.

What did the health workers' training involve?

First, we talked about methods of infection and basic rules of hygiene and highlighted the importance of rehydration, which is the critical treatment for cholera patients. I started in Gonaïves on November 6. Patients were flooding in and there weren't enough staff people, so we had to hydrate everyone to reduce fatalities right away. I explained to the health workers that if patients can drink, they need to be given oral rehydration salts. On the other hand, if their condition makes it impossible for them to drink, then they need to be hydrated intravenously. And you've got to monitor for complications, such as hypoglycemia, hypokalemia, and acute pulmonary edema, in case patients become over hydrated.

Next, the training focused on applying the protocol in order to assess the degree of dehydration and determine the appropriate action. There are three plans—A, B and C—that are applied based on age, weight and the assessment of the level of dehydration. The plans are graduated, with plan C corresponding to the sickest patients. Next, we focused on improving treatment and standardizing the techniques of care.

You are paired with a logistician trainer. Why?

The other aspect of cholera response is monitoring proper hygiene practices in medical facilities. The logistician trainer worked on isolation measures and on setting up the patient pathway, which is critical in preventing the spread of the illness. He trained the hygienists, who are responsible for cleaning the tents used as treatment centers, removing vomit and feces and preparing the different formulations of chlorinated water, in accordance with the protocols. The centers need water for drinking, hand washing, cleaning floors and facilities, removing excrement and handling corpses.

We had to deal with the diversity of the health workers. They were divided evenly between nurses and nursing assistants, so we provided individualized trainings, using hands-on techniques and interactive teaching methods allowing them to apply their new knowledge right away. The first training module took two hours, and by the end, they were ready to go. Two more hours were spent on applying the protocols and overall treatment issues. The international nurses then took over, monitoring the staff's skills on a daily basis.

The trainings achieved their objectives and have helped to reduce fatalities rapidly in the cholera treatment centers. We trained more than 550 nurses and nursing assistants in total.

Since the epidemic began in late October 2010, MSF teams have treated more than 110,000 patients across the country. Nearly 7,500 Haitians and 430 international employees are implementing MSF's programs in field and are responsible for battling cholera.