Haiti: Decline In Cholera Surge May Only Be Temporary

“Last week’s decrease in cases is good news, but we can’t get complacent,” said MSF's head of mission. “The cholera epidemic in Haiti is far from over." 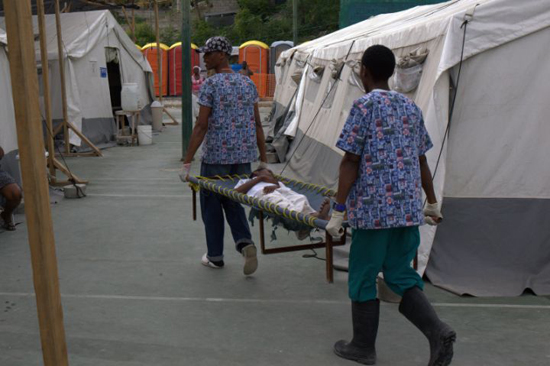 A patient arriving at an MSF cholera treatment center in Port-au-Prince.

In the middle of May, Doctors Without Borders/Médecins Sans Frontières (MSF) witnessed a significant increase in the number of cholera cases in the Haitian capital of Port-au-Prince, particularly in the densely-populated Carrefour neighborhood.

This past April, MSF’s cholera caseload had declined to fewer than 400 patients per week in Port-au-Prince. Weeks later, though, cases suddenly started increasing rapidly. In the second week of June alone, MSF treated 2,891 cases—more than six times the number of cases treated in the last week of April.

At the moment, the surge may be starting to subside. In the week that ended on June 19, MSF treated 1,470 cases, a nearly 50 percent decline from the previous week.

It is far too early to claim that the threat has passed, however. “Last week’s decrease in cases is good news, but we can’t get complacent,” said MSF Head of Mission Sylvain Groulx. “The cholera epidemic in Haiti is far from over. Health care providers must remain at the ready, and serious improvements are still urgently needed in hygiene, sanitation and drinking water supply. Especially with the coming hurricane season, and the second rainy season, the epidemic could surge again at any time.”

Between May 2 and June 19, MSF treated 11,082 patients for cholera in Port-au-Prince. In that period, 39 patients died, less than 0.4 percent of the total cases treated. Cholera is a serious disease that kills rapidly if it is not treated soon after onset. Nevertheless, MSF always insists on achieving a mortality rate of less than two percent.

In response to the recent surge, MSF rapidly increased its cholera treatment capacity in Port-au-Prince to more than 1,000 beds at eight treatment facilities around the city. MSF also held a press conference in Port-au-Prince on June 3 and called on government and international health actors to ensure an adequate response. MSF continues to stress the need for the Haitian health authorities to improve their cholera monitoring and treatment capacity.

The bacteria that cause it typically spread due to poor sanitation. Haitians can best defend themselves against cholera through good hygiene practices, early detection and treatment, and by drinking chlorinated water.

While the Carrefour neighborhood seems to have borne the brunt of the recent upsurge, the precise reason for this is still unclear. MSF epidemiologists and water and sanitation specialists are taking steps to address the sources of cholera transmission and prevent the spread of the disease in Carrefour and elsewhere in Port-au-Prince.

Since the start of the Haitian cholera epidemic in October 2010, MSF has treated more than 140,000 patients across the country, or about 40 percent of the more than 330,000 reported cases. Cholera has killed more than 5,000 Haitians in the past eight months.