Cholera is a very treatable disease; treatment centers are key to the response and don?t pose a risk to the population, says MSF

A demonstration at an MSF Cholera Treatment Center in St. Marc has disrupted the outbreak response and potentially imperiled people in need of urgent medical assistance. 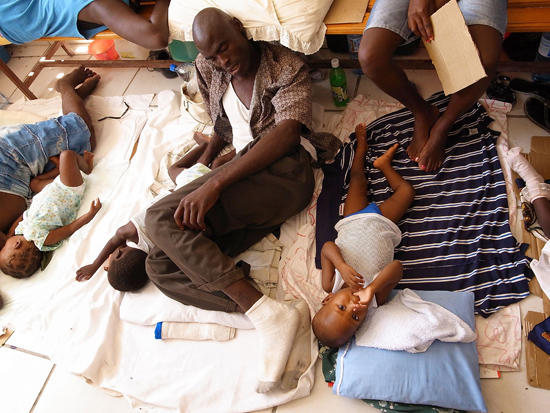 People suffering from the symptoms of cholera lay on the floor at a Ministry of Health hospital where MSF is providing treatment.

A demonstration at a Doctors Without Borders/Médecins Sans Frontières (MSF) cholera treatment center in the Haitian town of St. Marc on Tuesday, October 26, has disrupted efforts to prevent the spread of cholera and treat people already suffering from the disease, MSF said today.

Construction of a 400-bed cholera treatment center (CTC) was nearing completion when a group of people demonstrated violently against the opening of the facility. Several tents within the center’s compound were burned. Patients were due to be moved to the CTC from the St. Nicholas Hospital in St. Marc, where cholera patients are currently being treated in less than ideal conditions. There were no serious injuries resulting from the demonstration.

“The ultimate consequence is that we are now unable to respond to the cholera outbreak in the Artibonite region in the most effective manner and under the best possible conditions,” said Francisco Otero, head of MSF’s emergency response teams in St. Marc. “This facility was critical to relieving the burden of the high number of cases on St. Nicholas hospital and ensuring rapid treatment of critical cases.”

Close proximity of a CTC to a community does not pose an additional risk to the population. On the contrary, a CTC located in a cholera-affected area affords rapid treatment, helping to ensure lifesaving care to critical cases and to mitigate against further spread of the disease. Rapid onset of diarrhea and vomiting from cholera infection can be lethal in less than 24 hours if left untreated.

“Cholera is a very treatable disease and we are ready to put our expertise to the best use to treat victims of this epidemic,” said Otero. “We look forward to working with the authorities and community leaders to find a solution that does not compromise the effectiveness of the response to this outbreak. MSF remains committed to establishing cholera treatment centers to give the optimal treatment possible and control the spread of the disease."

It has been recommended by the Ministry of Health to dismantle the CTC, which was being assembled on a football field near the hospital, in order to relieve tensions with the community and to give the opportunity to further reassure the population that the facility does not pose any risk to them. The Haitian authorities have stated that they will propose another location for the CTC. It had been previously authorized to be placed there.

Since the emergence of cholera in St. Marc, MSF teams have been working in the Ministry of Health’s St. Nicholas Hospital, which quickly became overwhelmed with patients. Isolating cholera patients to limit infection risk to the rest of the hospital population presented a significant challenge. A functioning CTC would have relieved pressure on the hospital, allowing it to continue its normal function in service to the population. It also would have provided optimal hygiene control, which is fundamental to cholera treatment. MSF has a long history of employing CTCs in highly effective cholera interventions in many countries.

There are still significant numbers of patients arriving at the MSF-supported St. Nicholas Hospital. At the hospital, MSF teams treated around 450 patients each day on Sunday and Monday, including those who received oral rehydration solution (ORS) and intravenous treatment.

Besides, at present MSF can treat cholera at eight of its facilities in the Artibonite region and in and around Port-au-Prince.