MSF teams in Haiti treated more than 41,000 people for cholera and cholera-like symptoms in cholera treatment centers since the outbreak began. 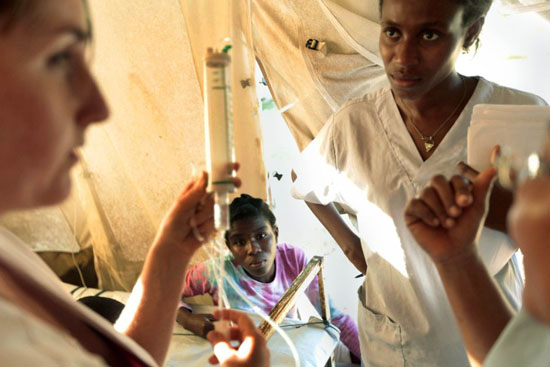 Staff and patients at MSF's cholera treatment center in the Tabarre section of Port-au-Prince.

From October 22 through November 28, Doctors Without Borders/Médecins Sans Frontières (MSF) teams in Haiti treated more than 41,000 people for cholera and cholera-like symptoms in cholera treatment centers (CTCs) established in Port-au-Prince, the capital, as well as in the Artibonite region and at other sites in the north and northwest of the country.

In the Artibonite region, where the outbreak began, MSF has treated 20,325 cases. The number of admissions has stabilized. In the Port-au-Prince area, 12,100 cases have been treated—more than 3,500 cases of them during the week ending on November 28. The prior week, November 14-21, 4,500 cases had been admitted to MSF CTCs in the capital.

In the North, in the city of Cap Haitien and in surrounding areas, 5,800 cases have been treated by MSF since the beginning of the intervention, including 1,900 during the week ending November 28. In the northwest—in and around the city of Port de Paix—MSF has treated 3,100 cases since the start of the intervention, including at least 1,000 new cases last week, which is down from 1,300 cases reported the week of November 14-21.