Haiti: Responding to the Aftermath of Hurricane Matthew

In the areas of Haiti hit hardest by Hurricane Matthew, many communities remain cut off from aid, rendered inaccessible by the storm. Here, Doctors Without Borders/Médecins Sans Frontières (MSF) patients and staff members tell their stories in their own words.

Lopino, a village in the mountains near Jérémie, southwestern Haiti, is one of many isolated communities severely affected by Hurricane Matthew. Once nestled among banana trees, today the village's streets are choked with broken branches and debris left by the storm. A colored brick façade is all that remains of the church. Many of Lopino's residents fled to the village's health center during the hurricane. Today the facility is used for medical consultations.

Picking Up the Pieces

"My mother and son were both in our home when the hurricane struck, while I was in another village," says Liselle, who brought her mother, 80-year-old Annette, and her son, 15-year-old Givro, to the clinic. "The wind blew a piece of metal sheeting off the house, and it fell down on them. They could barely move, and the room filled with water. When the storm had ended, I rushed back home and found our home damaged and both of them injured. They had open bruises on their feet and the backs of their heads. The nurses from our health center had gone to Jérémie to take refuge there, so my mother bandaged her wounds with the help of a person in the village. A man also stitched the wound on my son’s head. [Givro] was hurting and I could not even give him enough to eat. My mother’s injuries were causing her so much pain, especially when her ankle wound became infected. She couldn’t walk and barely wanted to eat. There was no way to get her to the hospital like this. I took them immediately to the clinic when I heard about it.

There was a water station in the village but it was broken during the storm. It is still covered in branches and pieces of rocks and metal. There is also a water source further away, but the trees are blocking most of the access. It’s really difficult to find clean water.”

Givro’s and Annette’s wounds were cleaned and bandaged, and Annette received a tetanus vaccine, as she had no vaccination records. MSF mobile teams will return to Lopino to follow up on the patients they consulted. 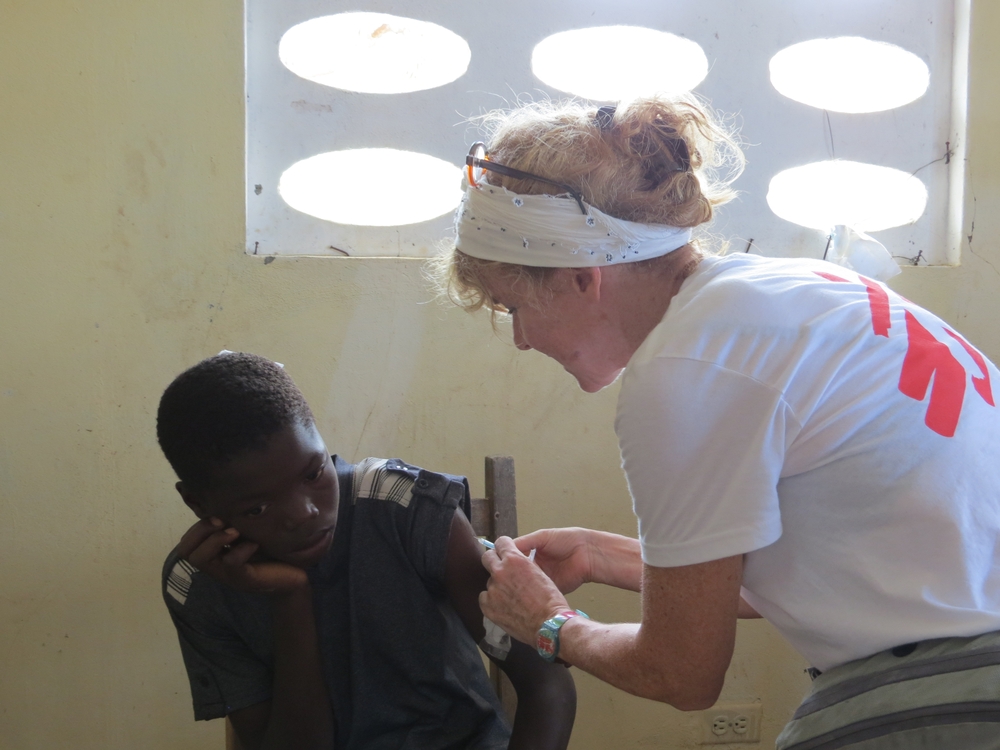 MSF doctor Danielle Perriault was part of the team that traveled to Lopino to provide care in the wake of the hurricane.

"This morning, our mobile clinic headed to Lopino, a village in the mountains that can only be reached by helicopter. Like most villages in the department of Grand'Anse, Hurricane Matthew left a trail of destruction here. The streets are bordered by fallen trees and debris, and the valley is covered in trees torn in half. Only a red-and-white front remains of the church. Luckily, the health center, which served as a refuge for the residents, survived the hurricane.

Most of the gear we brought along is equipment to treat open infected wounds, to put casts on fractures, or to vaccinate against tetanus.

Our time in the village is always limited, because the frequent storms during the rainy seasons restrict helicopter flights. Even when we're able to reach a village by car, driving on damaged roads can take more than two hours one way, reducing the time available with patients. So we have to work as quickly as possible. Today, we treated 58 patients, but there were days that we treated up to 90. Our priority is to treat open wounds, fractures, and pediatric emergencies.

It’s been two weeks that these people have lived with painful injuries or broken bones without treatment. Fractures, whether simple, complicated, or open, are sometimes stabilized by traditional healers. You can imagine all too well the suffering of people left without care for two weeks. And there are still so many people we haven’t reached yet.

As we arrived in another village a couple of days ago, the priest was the only person to welcome us at the health center, because all the nurses had left the village. There were many people waiting for treatment that day. There were so many patients to attend to that, finally, I had to ask the priest to help put a cast on a broken leg!

The lack of food adds to the patients' trauma. Several days ago, I treated an elderly woman with severe burns on her hand. As she refused an injection against the pain, I tried to distract her by talking about her family. She had lost her two children and was now the only caretaker for her two grandchildren. Her only worry during the treatment was the reality that when she was leaving the clinic, she would go home with no food to feed her grandchildren."

Cassandre Saint-Hubert MSF nurse (from Haiti) treats a patient at a Medecins Sans Frontieres (MSF) mobile clinic in the village of Nan Sevre, in the mountains north of Port-à-Piment. The village is accessible only by helicopter since Hurricane Matthew devastated the country.
Haiti 2016 © Joffrey Monnier/MSF