In Haiti, Spared an Eclampsia Crisis

An MSF patient tells her story 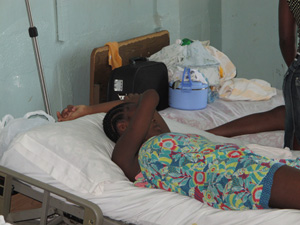 "I developed eclampsia the day before I delivered and I realize that's serious," said Crisla Florestal, 19, who was readmitted a day after giving birth at the Doctors Without Borders/Médecins Sans Frontières (MSF) hospital Isaïe Jeanty, in Port-au-Prince.

Crisla gave birth to twin girls following major complications. "They are so pretty, but I can't take care of them yet. I have too much pain." She nods towards another woman who smiles, as if to confirm that this unit—for complicated deliveries—deserves its name.

Many pregnant women here have had difficult pregnancies for a variety of reasons. Crisla, who knows that her own story has a happy ending, explains that complications can arise without warning. "During my pregnancy, the doctors advised me to stay calm so that my blood pressure would not rise. However, the day before I gave birth, I had a problem at home. I got angry and I fainted. When I woke up the next day, I realized that I was in the hospital with the two babies next to me. Then they told me that I had developed acute eclampsia and that the babies were born by Cesarean section."

Eclampsia is a disease affecting pregnant women that causes almost half of all maternal deaths in Haiti. Providing quality emergency care, including a cesarean section, can save the lives of both mother and baby.

The young woman said that she was making a good recovery after the birth until she went home, where she began to bleed again. "I came back to the hospital right away,” she said. “The doctors realized that I still had blood clots in my belly, so they operated again to clean everything out."

It is very difficult to be pregnant given living conditions in Haiti today, Crisla said, the deaths of so many people in the earthquake have been especially hard for pregnant women, who need stability. She adds that economic pressures create a lot of stress because most women are dependant on other family members and do not work.

"I became pregnant in the last year of high school,” she said. “My family supported me so that I could continue going to school. I was spared from this eclampsia crisis, but the future is not rosy. Now I have more priorities—I also have to educate two children."