MSF opened a new treatment center for burn victims in Port-au-Prince to replace the one that was destroyed by the January 12 earthquake. 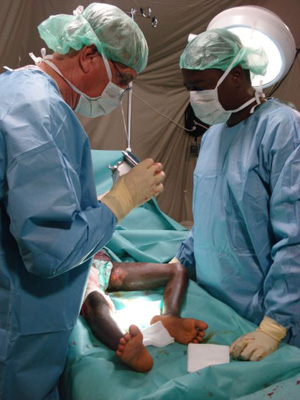 Doctors tend to a young patient in the new burn unit in MSF's Saint Louis Hospital in Port-au-Prince.

When MSF's La Trinité Hospital was destroyed in the January 12 earthquake, Haiti lost its only specialized treatment unit for victims of severe burns. A dedicated unit with an operating theater has now been installed in MSF's new Saint-Louis Hospital in Port-au-Prince. Below, Dr. Rémy Zilliox, a plastic surgeon and burn specialist at Edouard Herriot Hospital in Lyon, France, recounts the three weeks he spent working at Saint-Louis.

What are the leading causes of burns?

I started working in the burn unit just after it opened in late March. At that time, we had two or three admissions of varying severity every day. The leading cause of burns is related to the very precarious conditions in which hundreds of thousands of people live. Because they lack housing, all aspects of family life take place in just one, often very cramped space.

Family members sleep, play and cook in that same area. Women and children are often burned during domestic accidents—a pot of boiling water or oil tips over, or a candle sets fire to a blanket. We see so many children that we had to set up a separate tent. The unit includes three tents and thirty beds for severe burn patients, both children and adults.

Men are most often burned when handling flammable products, primarily fuel containers. Because there are fuel shortages, people store fuel, which increases the risk of accident. I've also seen electrical burns, which are particularly serious. Electrical wires that trail on the ground are very dangerous. I had to amputate the feet or hands of four patients who were burned by electricity. Two of them did not survive their burns.

Before the earthquake, La Trinité hospital treated patients who were burned in domestic accidents or by electrocution. Electrical facilities were already in poor shape, especially after the 2007 hurricane. The causes haven't changed much, but burns are increasingly frequent and severe now because more people are living in even more precarious conditions.

Why is a specialized unit necessary?

There was no specialized burn unit in Haiti or Santo Domingo and that's why we opened this unit at La Trinité in 2006. One of the primary issues is to reduce the risk of hospital-acquired infection. The new facility, which is under a tent, turns out to work quite well because each space is closed off, which limits the circulation of both air and contamination. The medical staff and visitors put on protective garments before entering the unit. A burn patient generally requires very regular care for three weeks to a month. Dressings must be changed every other day until the burns are fully healed. This process is performed in the operating room to prevent infection and because many patients require anesthesia to reduce pain. Changing a dressing can take a half-hour or two hours. The burned surface is cleaned and then swaddled in a tulle gras dressing [gauze impregnated with paraffin and antiseptics], compresses, and bandages.

Daily treatment is complicated, and you must have the equipment to perform skin grafts on severe burn patients. We perform three or four grafts every day, using the early excision-graft technique as often as possible. This operation is performed five to ten days after the accident. It involves removing the dead areas and recovering the burned area with a “mesh” skin graft, which resembles lace. The skin that is to be grafted is processed in a machine that expands its surface. This makes it possible to take as little skin as possible from the patient, because the procedure can be performed using only the patient's own skin. Appropriate conditions are required to carry out the operation, and you must have a blood bank for transfusions.

After the earthquake, reopening this unit quickly became a priority. We need to improve the referral process because we receive only a few burn patients from other medical facilities and sometimes they don’t arrive in time to receive optimal care. For victims of severe burns, the 24 hours following the accident are crucial.

What is the initial treatment for victims of severe burns?

The burn patient is treated first in the emergency room of the Saint-Louis Hospital. The initial care is provided by doctors who have received special training. They assess the severity of the wound and its cause. Based on the extent and depth of the wound, they may set up a resuscitation infusion. This is the first step in the emergency treatment because burn patients lose a lot of water, salt, and micronutrients.

Next, you must decide whether the patient needs emergency surgery, which usually involves a tracheotomy or escharotomy [an incision in the burned area]. A tracheotomy is required when the lungs or mouth have been burned, which makes it difficult to take in oxygen. Burns also often create a sort of garrote at the neck or thorax. In that case, you must make an incision in the burned area to release the blockage that prevents breathing and blocks blood from flowing to the legs and hands.

Emergency surgery must be performed within six hours of the accident. One of our goals is to establish cooperative relationships with other facilities so that we can work together to improve the referral system for severe burn patients.