Handing Over the Somali Refugee Project in Ethiopia

In May 2012, after successfully coping with a humanitarian crisis, MSF handed over its project in Hiloweyn refugee camp to an Ethiopian refugee agency. 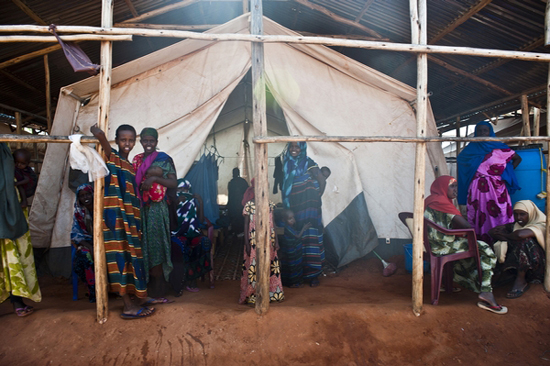 Doctors Without Borders/Médecins Sans Frontières (MSF) has handed over its project in Hiloweyn camp, one of the five refugee camps near the border between Ethiopia and Somalia, to ARRA, an Ethiopian refugee agency. The number of refugees crossing the border has decreased significantly since August 2011—the height of the humanitarian crisis—when MSF opened the project.

When MSF expanded medical activities in the Liben refugee camps in southern Ethiopia in May 2011, an average of 300 refugees were crossing the border every day, with peaks of 1,500 a day. Years of civil war in Somalia, compounded by a drought that hit the Horn of Africa early last year, caused widespread malnutrition, while aid agencies could extend little assistance inside Somalia itself. The refugees that were crossing the border to Ethiopia had sometimes walked for weeks in search of safety and assistance.

“I am a farmer in Somalia, and had to flee because of drought and hunger," said one refugee who fled Somalia in June of last year. "Our cattle died, and there was no rain. Sometimes my children were without food for many days, they were so hungry and suffered a lot. There was also a lot of violence in our town. We left everything we had and traveled with many other people. All the children on a donkey cart. The men and women were walking. The journey took 21 days. We had . . . little food and water, I saw people die along the way. One of my children almost passed away during the journey. She was very malnourished.”

At the onset of the crisis, MSF quickly set up medical screening at the border, as well as an outpatient health post and therapeutic feeding center in the transit camp that housed the newcomers. “At the height of the crisis, we were doing around 130 new admissions in the therapeutic feeding clinic per day,” recalled Karline Kleijer, who managed MSF programs in Liben at the time. “I think altogether we can be proud of what we achieved. It wasn’t easy. There was a big emergency in an area with a very sensitive security situation. There were big teams in Liben working and living close together and under a lot of pressure. Taking all that into account it is amazing what has been achieved!”

The majority of the incoming refugee population in July and August 2011 suffered from malnutrition and opportunistic infections. Since then, in the Hiloweyn camp alone, MSF has treated over 50,000 outpatients—including nearly 10,000 children and young adults for malnutrition—and 1,000 inpatient admissions.

MSF constructed emergency medical facilities in the newly opened Hiloweyn and Bur Amino refugee camps to provide the infrastructure for medical activities in an unforgiving environment. MSF also expanded the infrastructure of the Dolo Ado Health Center with new surgical, post-operative, and maternity wards, including a new laboratory to serve the local host population and act as a referral center for refugees. In May 2012, MSF handed over the infrastructure and most of the programs in Hiloweyn camp to ARRA.

MSF continues to work in all five camps in Liben with stabilization centers for severely malnourished children with medical complications. Additionally, MSF provides primary and secondary health care in the newest camp, Bur Amino, where an average of 2,000 new refugees are settled per month. MSF also works in partnership with the Ethiopian Ministry of Health to provide emergency surgical care and stabilization in the Dolo Ado Health Center.

From May to December 2011, MSF ran 22 projects in many different parts of Somalia and in refugee camps for Somalis in Ethiopia and Kenya. In this period, at the height of the crisis, MSF treated over 78,500 patients for severe malnutrition and over 30,000 for moderate malnutrition, over 7,200 patients for measles, and vaccinated over 255,000 persons against disease in the Horn of Africa. MSF assisted in over 6,000 deliveries and provided over 537,500 outpatient consultations.

The war in Somalia is now entering its twenty-first year. After the drought and the enormous crisis of last year, people survive and live hand-to-mouth and are still highly vulnerable to infections, disease, and malnourishment.

Inside Somalia, MSF will not step up its activities or open up new projects until its two colleagues—Montserrat Serra and Blanca Thiebaut, abducted in Dadaab and held in Somalia since October 2011—are reunited with their families.