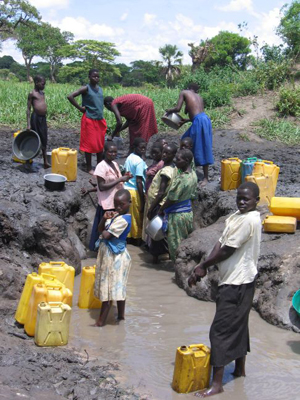 Children gather water at an IDP camp in Patongo.

Hepatitis E is a condition related to unhygienic environments. Outbreaks have occured in four locations in northern Uganda where internally displaced people (IDPs) have gathered. As of March 6, 2008, MSF had registered 474 hepatitis E patients—eight of whom have died from the disease. Although hepatitis E is not a chronic disease, there is no cure and the only action that can be taken is to relieve the symptoms through methods such as rehydration. If the patient survives the infection, the virus disappears and the liver recovers its regular function.

A recent outbreak of hepatitis E in the Kitgum district of northern Uganda has further complicated an already unpredictable and precarious health situation for IDPs in the region. Despite the improved security situation and ongoing peace negotiations between the Lords Resistance Army (LRA) rebel group and the government of Uganda, urgent health needs for the population remain unmet. Improved security has resulted in displaced people returning to their homes or moving to smaller camps closer to their villages, however larger camps around Kitgum, where approximately 300,000 people are living in congested and unhygienic conditions, still remain.

The first cases of hepatitis E were admitted on November 22, 2007, in Madi Opei, where MSF was already providing HIV and tuberculosis (TB) care to a population of approximately 70,000 IDPs at a Ministry of Health clinic.

Although the disease is only mild to moderately severe, it can be particularly dangerous for pregnant women as the risk of mortality increases in each trimester. Among the patients who died are two of the 12 pregnant women admitted, demonstrating a 20 percent fatality rate in this cross-section of the population.

“Improving the general sanitation situation in the camp is the only way of breaking the contamination chain. To save lives here, we have to dig a latrine for every 20 people, provide clean water, and improve awareness of good hygiene in the communities,” says Kodjo Edoh, head of mission with MSF in Uganda.

The main factors responsible for the epidemic are: low coverage of latrines in the camps; poor hygiene in homes; and a lack of personal hygiene practices, namely routine hand-washing with soap before eating or after using the toilet. Hepatitis E is a disease transmitted between persons via the fecal-oral route. This means that humans can easily be infected by drinking water contaminated with human or animal feces; infections may also occur from eating the raw meat of a contaminated animal.

Since the epidemic began in November 2007, MSF has taken charge of patient case management. Other NGOs and the Ministry of Health are assuming responsibility for water and sanitation activities, as well as social mobilization. Activities such as mass soap distribution, jerry can distribution, and the chlorination of all boreholes and buckets have been initiated; broken boreholes may also be repaired. In order to halt the transmission of the virus, MSF aims to improve the sanitary situation and increase hygiene promotion and awareness of the disease in the community.

Since 2003, MSF has been running projects in Kitgum district, addressing the health needs of the IDP camp population.