"I'm Going to Tell The Whole World": An HIV "Expert Patient," In Her Own Words

Once "more dead than alive," a woman living with HIV in Swaziland's remote Shiselweni region is now healthy and trying to help others who are where she once was. 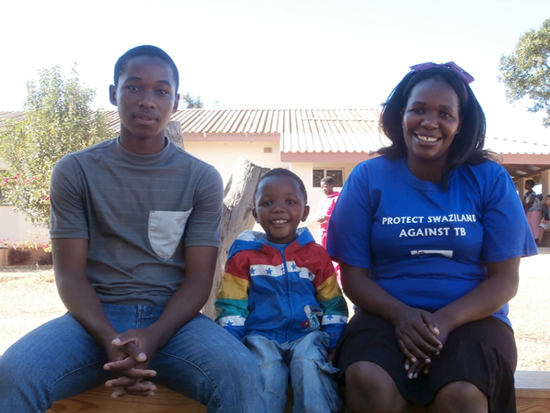 Thembi (right) with her two sons

As a Doctors Without Borders/Médecins Sans Frontières (MSF) "expert client" in Swaziland’s remote Shiselweni region, Thembi Ngcamphalala shares her own experiences and counsels other people who are living with HIV/AIDS. A joyful and energetic woman, she can often be seen walking up and down the aisles of the small clinic in the village of Dwaleni, interacting with people who come in. Expert patients are part of a broader strategy MSF is employing to decentralize HIV/AIDS care in resource-limited settings in order to scale-up and expand treatment. Here, Thembi tells us her story:

In 2001, I tested positive for HIV. At that time, I was 25 years old and in a terrible state. I had lost a lot of weight, I was vomiting, had cold and hot rashes and was saying weird things. My whole body was covered with sores and I was confined to a wheelchair. Literally, I was more dead than alive.

Finally my brother brought me to the hospital in Swaziland’s biggest town, Manzini. I was diagnosed with pneumonia and the doctors drained four liters of water from my lungs. They asked if I wanted to test for HIV. “What is this?” I responded. At the time, I was not even aware AIDS existed. I had lived all my life in my small village, and I did not know what was going on in the world.

I did the test and learned about my positive status. My CD4 count to help indicate the stage of the disease was three, which is very, very low and meant that I had no immune system left. It’s amazing I was still alive. Fortunately, I got good and very nice counseling right away. The doctors informed me about the possibility of treatment and immediately I agreed. I was started on antiretrovirals, the medications for the treatment of HIV, on 26 January 2002.

At that time, being HIV-positive was a total disgrace. Positive people were not treated as normal human beings. I did not disclose my status to anybody, except my brother, who took care of me. I was so thin, people were afraid of me and didn’t want to shake hands. But I got better fast. After two weeks I had left my wheelchair and only needed a stick for walking. I started physiotherapy to relearn the use of my legs.

It took me a year to tell my family. First, they were shocked and didn’t want to hear about it. At that time, so many people had died, including my aunt and some of my sisters. In Swaziland, people talk about HIV like about a wild animal; they call the disease the “world killer.” That shows how much fear there is. People didn’t want to share dishes with me.

I remember an incident that hurt me a lot: I was out with my cousin and it got cold, so he lent me his jacket. When I gave it back, he burnt it, out of fear of getting infected. It was quite frustrating that people had so little understanding of the disease and the possibilities for treatment. So I said to myself: “I’m going to tell the whole world that testing and treatment saved my life.”

In 2004, I started volunteering for an organization that helped people living with HIV/AIDS in Nhlangano, the capital of Shiselweni region. They asked me to share my experiences, and I told people about antiretroviral treatment and what it had done for me.

When I started seeing MSF cars in Nhlangano in 2009, I became curious and asked around. Someone told me what MSF was doing, and immediately I wrote my application letter and was hired as an “expert patient.” My role is to do pre and post-test counseling and to be there for the patients when they need support.

I really like the work with the patients. I know I give them hope by telling my story. Today I am fine. I have a healthy four-year-old boy who is HIV negative. Before I had him, five children I brought to this world had died, each after six months. My older son is 17, and he is well, too. I know what the patients are going through, and telling them my story and how important it is to stick to the treatment encourages them. The other day a young girl even told me I was her role model. That made me very happy.

Besides my work with the patients, I am also a “teen club aunt” with MSF. Once a month, HIV-positive children and teenagers meet on Saturdays to talk about their treatment, how they cope with the side effects, and how they feel about not disclosing their status at school. It gives me so much pleasure to work with the young people. They are not afraid of life, because they know others who are in the same situation and are doing all they want, including going to university.

I am grateful for my current life. MSF really opened my mind. This organization has taken many people from down in the dust up to green grass. By decentralizing care, MSF brings the medication directly to the people. We do not have to make long trips to the hospital. It is easier for a patient today to stick to the treatment. I don’t know how many graves there would be in all the homesteads of Shiselweni if it were not for MSF.