An MSF field coordinator in Najaf discusses perinatal and obstetric care in the one of the region's largest hospitals. 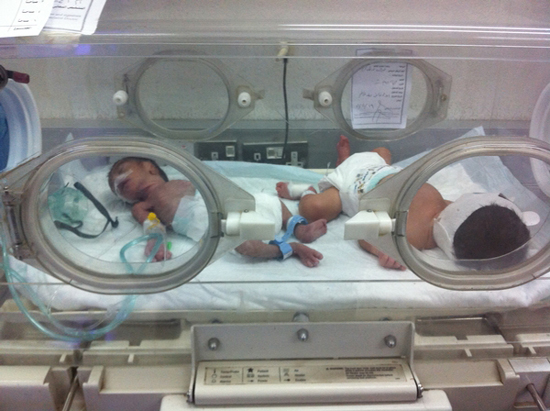 Two newborn babies in Al Zahara District Hospital, where MSF has been working since 2010

Shinjiro Murata, a Doctors Without Borders/Médecins Sans Frontières (MSF) field coordinator from Japan, worked with MSF in the southern Iraqi city of Najaf, where his main focus was setting up a new project focused on improving perinatal and obstetric care in one of the largest referral hospitals in the region. Here, he talks about his experience:

I arrived in Najaf more than a year ago, in October 2010, to start an MSF project in the Al Zahara District Hospital. Najaf is located 160 kilometers (99 miles) south of Baghdad and is one of the holiest cities for Shia Muslims. It was not an easy task, and surely a challenging experience to be working in such a different country. My previous experience with MSF was in Africa, so when I started working in Najaf I realized that I would need to see things from a different perspective and adapt to the reality of a country that used to have a very well organized health system but, due to decades of conflict and international sanctions, has seen a rampant deterioration in health care provision.

After the US-led invasion of Iraq in 2003, most of the nursing teaching structures (faculties and universities) were closed. This lead directly to a huge gap and shortage of specialized staff and a lack of training. Most of the nurses and the medical staff in the Iraqi health structures are under-trained and even less up to date on the latest technical and material medical developments. According to the Iraqi Ministry of Health, since February 2006, due to the aggravation of sectarian violence, over 70 percent of medical staff has fled the country, while hundreds have lost their lives.

MSF decided to start a medical program to support the main Ministry of Health referral hospital, the Al Zahara District Hospital, for obstetrics, gynecology, and pediatrics in Najaf city. The hospital is one of the largest hospitals in the region, with a 340-bed capacity, and it deals with approximately 1,950 deliveries per month. These account for almost 50 percent of the deliveries carried out in the whole Najaf Governorate, which has a total population of 1.2 million people. It is most of the time overcrowded with patients and the quality of medical services provided is sometimes not adequate.

According to the medical data we collected in the hospital during 2010, although maternal and pediatric mortality rates were low, the neonatal mortality rates were remarkably high. Almost 70 percent of the newborn babies admitted in the pediatric intensive care unit lost their lives, while 26 percent of newborn babies admitted in the sterilized unit died. What is also very worrisome was the fact that Caesarean sections accounted for 37 percent of all deliveries carried out in the hospital. And about 60 percent of all babies admitted were born by Caesarean section deliveries. Almost half of the babies who have died in the sterilized unit were premature.

In our effort to improve this situation for newborn babies in the hospital, we have had frequent meetings with hospital authorities to work together with our teams. It was a big challenge!

Together with my MSF colleagues, we have worked a lot during the last year to improve the quality of the medical services in both the neonatal and obstetric departments of this huge hospital. MSF pediatricians have provided hands-on bedside trainings on how to receive babies in the baby reception rooms and how to resuscitate them in the pediatric intensive care unit. MSF obstetricians and gynecologists have been implementing the standard operational procedures for antenatal care, delivery care, caesarean sections indications and timing, and anesthesia. And MSF nurses and logisticians have tackled some important transversal issues in the hospital, like improving infection control measures, bridging supply gaps of essential equipment and renewable items, and improving maintenance by the hospital.

For me, working for MSF in Al Zahara District Hospital was an interesting experience. MSF´s work in this hospital, mostly directed towards capacity building, training, and the participatory approach, is not the typical work that MSF usually does in its projects. Although it was very challenging, I think it is worth the effort.

After more than one year in Najaf I have seen that medical needs in the country are still very high. Until peace is restored in Iraq, MSF needs to continue supporting these pregnant women and newborn children. MSF is one of the few international medical humanitarian organizations working inside Iraq thanks to its independent, neutral, and impartial nature.