Iraqi Civilians Injured in War Get the Treatment They Need

Nearly a decade ago, when violence in Iraq was driving NGOs out of the country, MSF opened a surgery program for wounded Iraqi civilians in neighboring Jordan, a program that continues to this day.

Nearly a decade ago, when unrelenting violence in Iraq was driving NGOs out of the country, Doctors Without Borders/Médecins Sans Frontières (MSF) opened a surgery program for wounded Iraqi civilians in neighboring Jordan, which was politically stable and has an excellent medical infrastructure.

MSF is still running the surgery program today. Patients are civilians wounded by bombs, explosions, or gunshots in conflicts across the region, a neglected population that cannot access or afford to pay for the complex treatment they need. They have severe, complicated injuries that were not treated right away or couldn’t be treated properly in their home country. 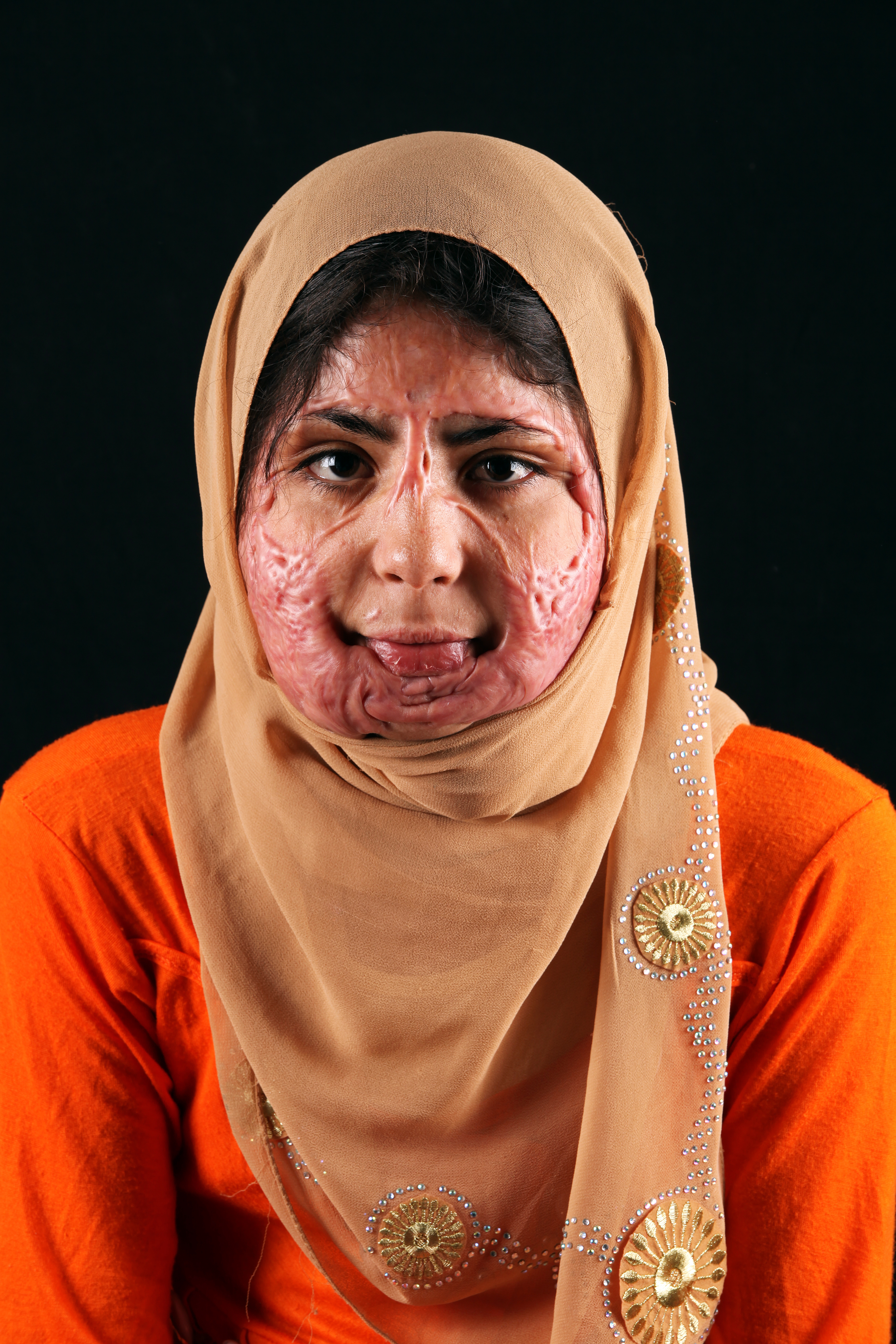 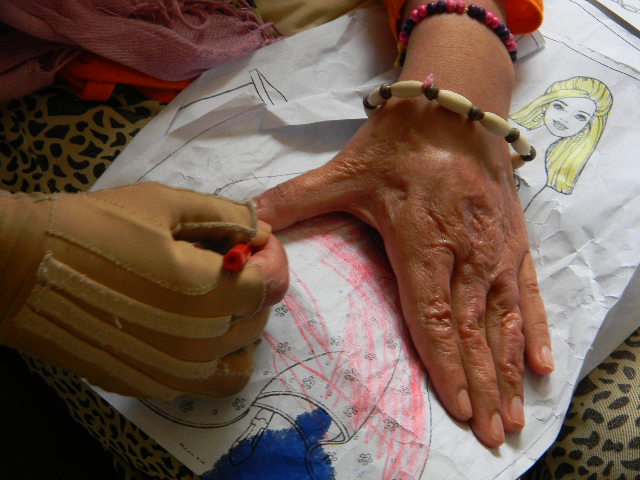 She works on a coloring book now that she has the use of her hands.

"It was a beautiful sunny day," said Khetam, a 13-year old girl and patient at MSF's hospital in Amman. "I was sitting in the backyard with my sister. Suddenly, I felt my body being thrown meters away from where I was sitting. Then everything went black. I can still remember the sounds of noise all around me before I passed out."

She was home in Fallujah, roughly 55 kilometers [33 miles] from Baghdad, during a school holiday in 2010, when a car near her home erupted in flames. She was severely burned on her face, neck, hands, and legs.

"A doctor in Iraq told us that MSF could treat the burns and that I would be better able to use my hands," she recalls. "He sent my medical papers to the MSF doctors in Amman and they accepted to treat me. I was so happy when I found out."

Dr. Mohammad Mhaidat, a psychosocial counselor in the program, remarked on Khetam's progress: "With psychosocial support, her self-confidence has increased. She's now coping very well with her injury and never becomes isolated from other children in the program. She regularly participates in classes and loves painting."

Katrien Goegebeur, the physiotherapy supervisor, has likewise seen Khetam make some crucial steps in her recovery: "In the beginning, she was unable to use her left hand at all due to a limitation in her range of motion at the base of her fingers. She has since regained full mobility."

"I am ready to go home now and re-join school," Khetam said. "I am studying the fifth grade curriculum now and can write better. When I first came to Amman, I couldn't paint or draw or write. Now I can do everything." 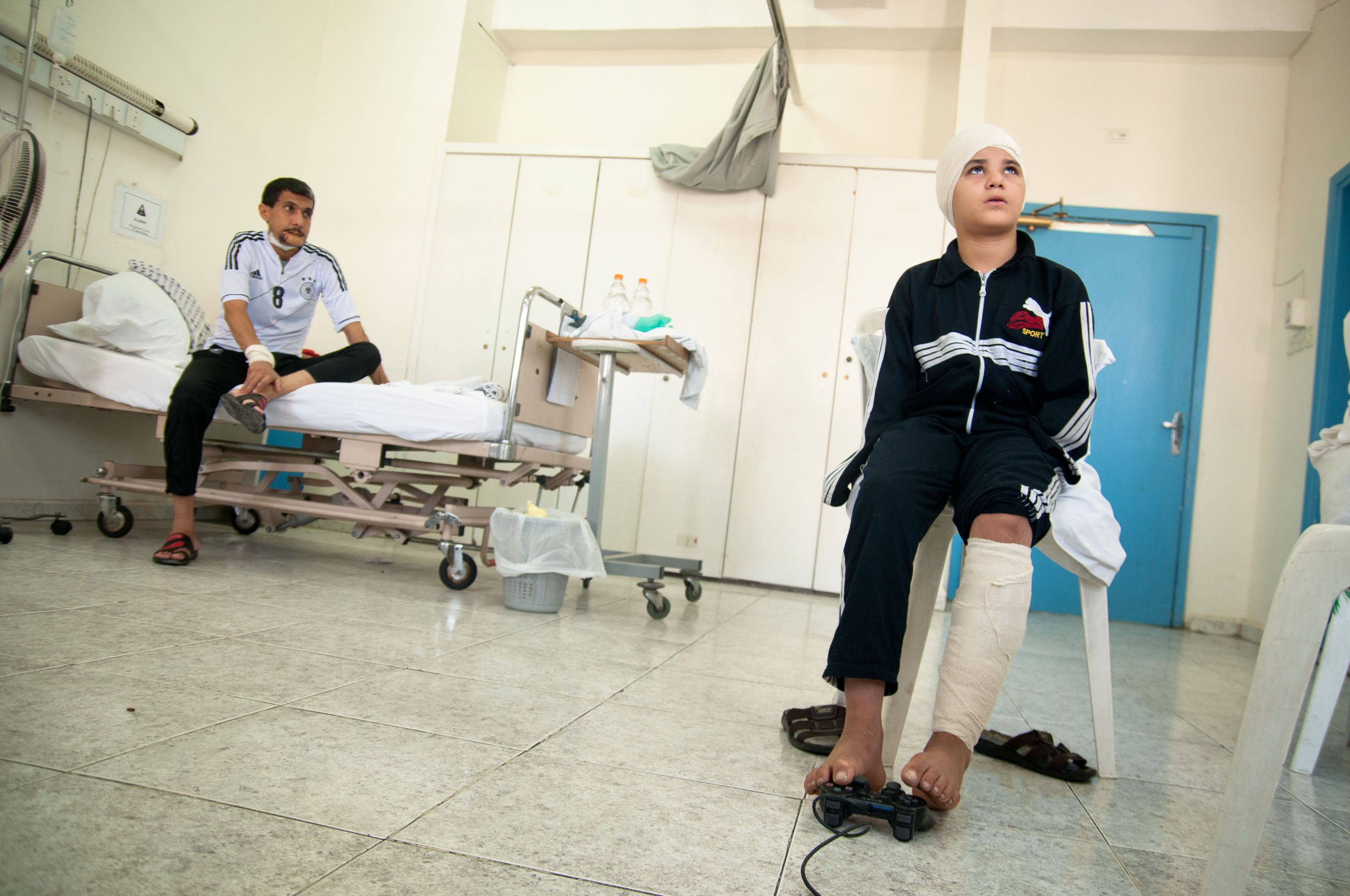 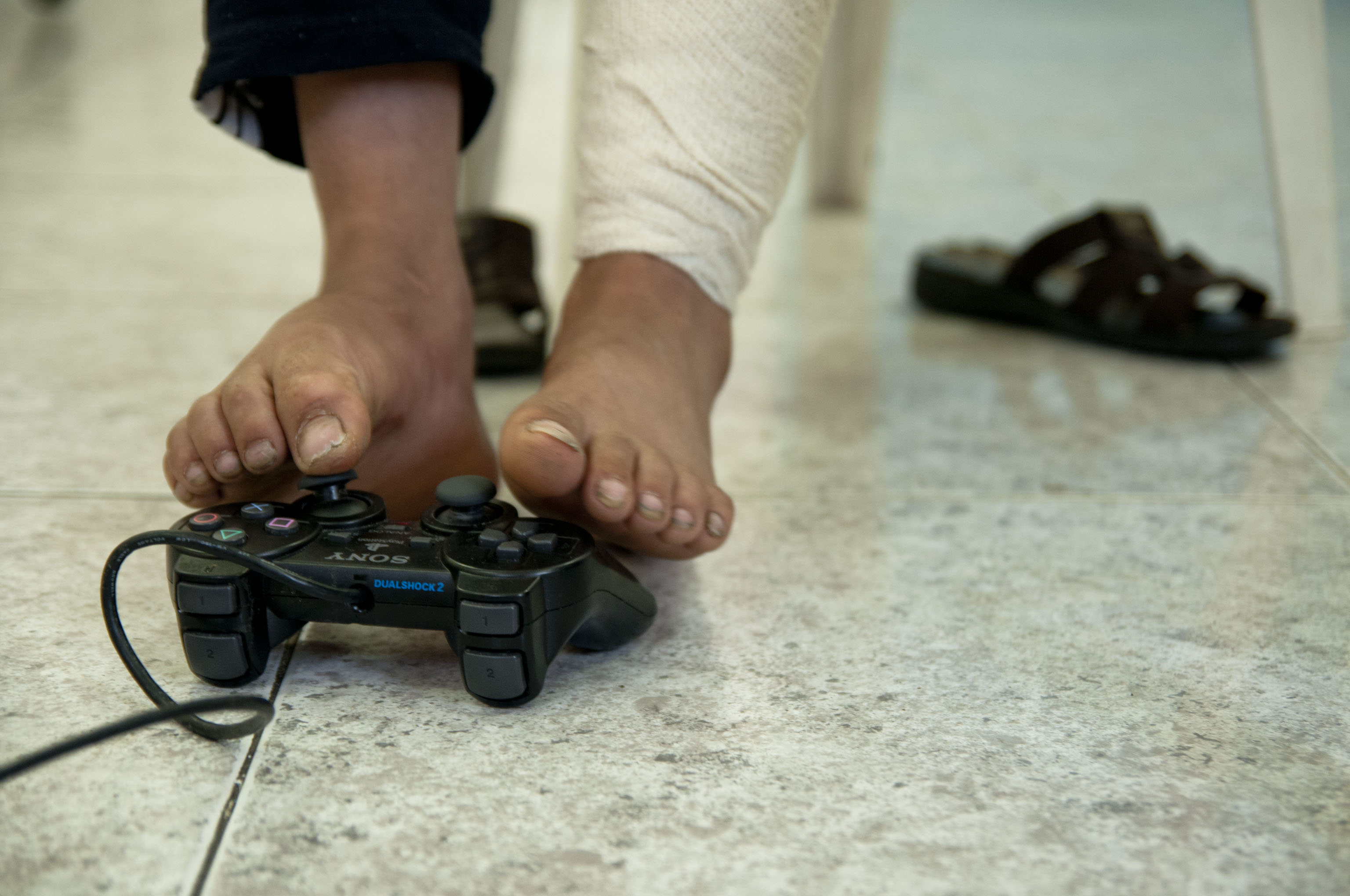 Without arms, the 13-year-old uses his feet.

Like many children in Iraq, Omar loved flying his kite on sunny days. He was doing just that with a group of friends in February 2011 when an explosion caused live power lines to drop from above. The lines ripped through his body, and Omar lost both his arms as a result.

He was immediately taken to the nearest hospital where doctors saved his life and he spent three days in a coma. Over the year the followed, Omar endured nine surgeries.

He was transferred to the MSF hospital in Amman in March 2012 and has been through three additional surgeries so far. Omar is still only in the first stage of treatment, but he can now swim and play football with his friends and brothers.

The emotional scars he suffered are too overwhelming to have healed yet, especially since he lost his mother in another horrifying explosion.

"Since his arrival at the project, we've been observing Omar very carefully and trying to provide him with all necessary psychosocial support," said Montaha Mashayekh, an MSF counselor. "He is a very sensitive child and keeps comparing himself with other children who are able to use their hands." 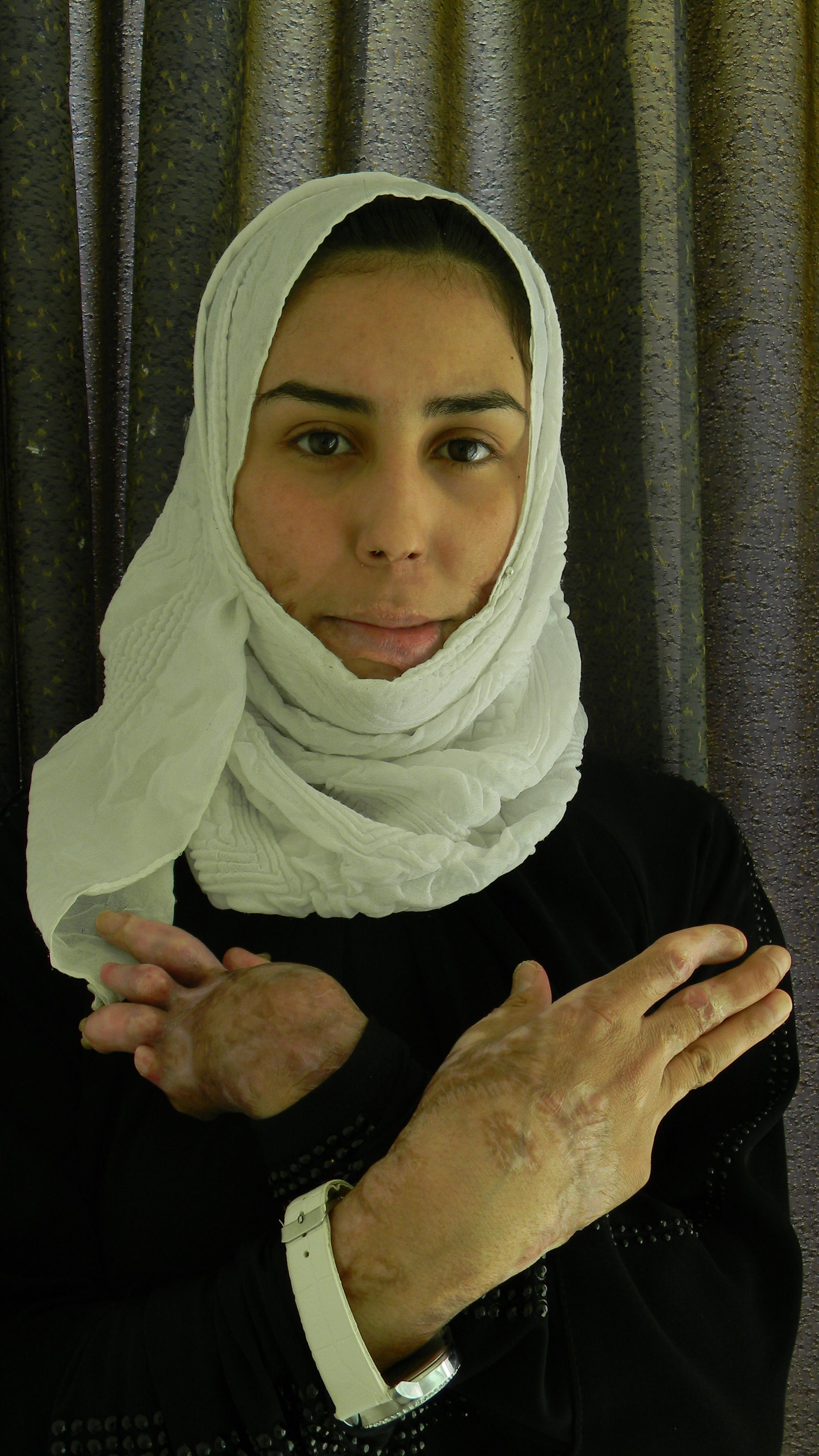 Nahla is finally getting the treatment she could never afford.

Nahla was shopping in a market by her home in the northern city of Kirkuk one afternoon when a car next to her exploded. The only things she can remember are the loud noises and people yelling.

She was transferred to a burn unit at a hospital in town where she received minor surgeries, but due to an infection she developed in the burns that covered her face and body, she had to spend three months in isolation.

Despite everything, Nahla feels fortunate. "I was lucky because I left my one month-old baby at home that day," she said. "It was a hot day in summer and I preferred to leave him at home with his aunt. I am so grateful for this; the weather saved his life."

Nahla was told she could have successful surgeries in Baghdad, but she couldn't afford the fees of private doctors. An Iraqi doctor in Kirkuk put her in touch with an MSF doctor in the area, and she was referred to MSF's facility in Amman.

"My husband and family could never afford this option and that is why I spent two years with no appropriate treatment," she said. 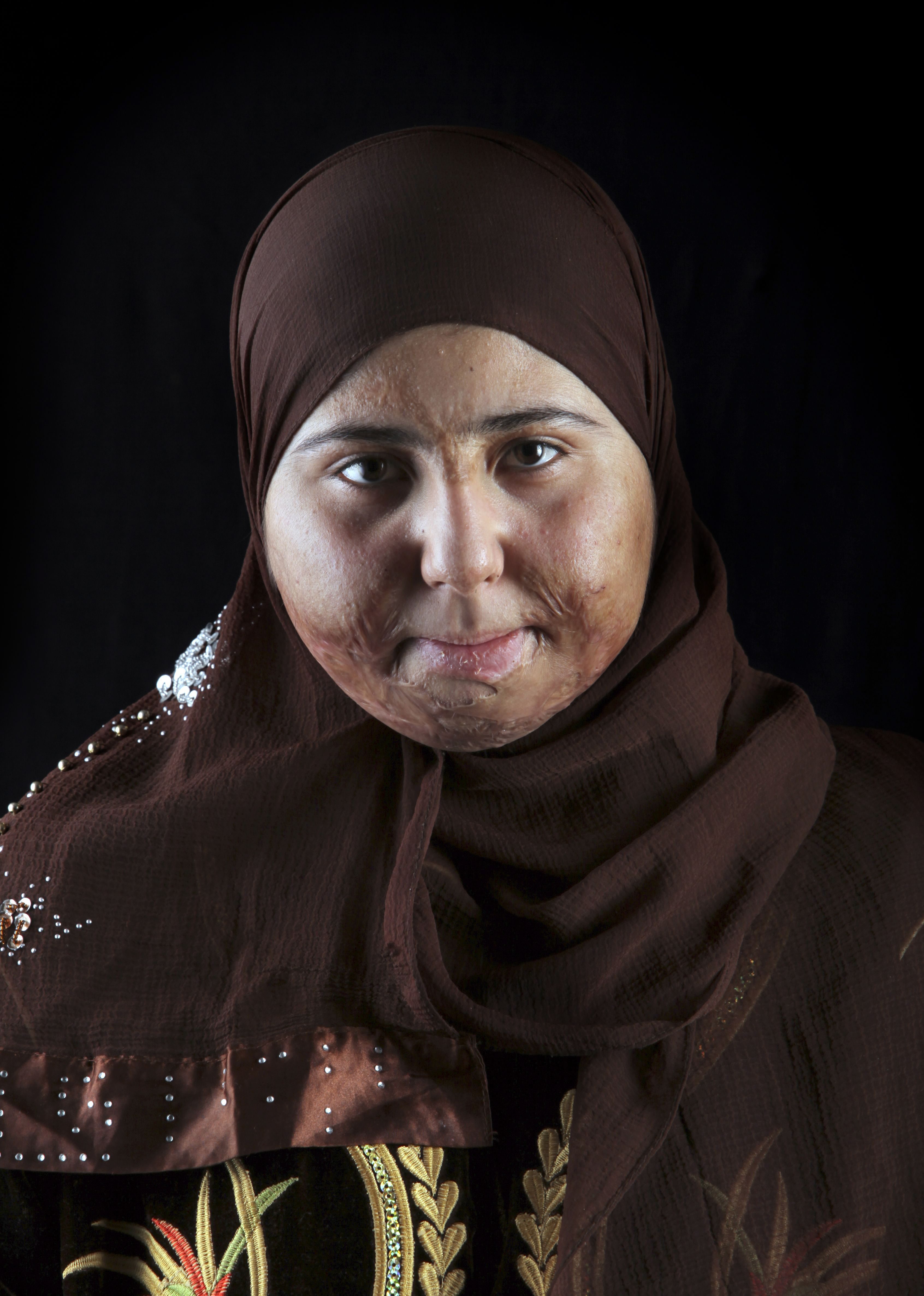 Like many of the patients at MSF's hospital in Amman, Zahra is still dealing with emotional, as well as physical scars.

Zahra, then 12 years old, was sleeping one night in 2007 when her family's house was bombed by a military helicopter. "I was sleeping peacefully with the rest of my brothers and sisters when all of a sudden, a heavy bomb exploded inside our small home," she said.

Her two brothers were killed in the airstrike. She still remembers one of them saying, after the house was hit, "Oh my god, I am dying, please call an ambulance!"

Zahra survived but was badly burned on her face and body. It was three years before she was referred to the MSF program in Amman, where she could receive additional treatment. Today, she feels lucky to be alive, and her recovery continues to progress, but the trauma of that night and the loss of her brothers lingers powerfully, invisible wounds likely to be with her for quite some time to come.