From January to February 2015, Dr. Bernard Guillon worked at a maternity center at the regional hospital in Katiola, Ivory Coast. Started by Doctors Without Borders/Médecins Sans Frontières (MSF) in collaboration with the Ivorian Ministry of Health, the center serves a region where high maternal and child mortality rates are serious public health problems. Here, Dr. Guillon tells the story of three patients.

“Kpaktitcho gave birth to twins, a boy and a girl, with no problems. While she hadn’t done all of the antenatal visits (far from it), she was in good health and worked in the fields right up to the end of her pregnancy. Her newborns were small, however; the girl weighed 1.8 kg (3.9 lbs) and the boy 1.7 kg (3.7 lbs).

They were each wrapped in a pagne [an article of woman’s clothing popular in Francophone West Africa]. Though it was 33°C (about 91° F) during the day, it might be “only” 25°C (77°F) at night. The little girl had good tonicity and nursed heartily, but the little boy had more difficulty, and soon became dehydrated. We asked the advice of the hospital pediatrician, who decided to infuse him. But, despite the warming lamp, his temperature dropped to 35.6°C (about 96°F). He was hypotonic and showed no sucking reflex. So we gave him some of his mother’s milk with a syringe, but he had trouble swallowing.

I then recommended putting the infant skin-to-skin with his mother. After an hour of this simple, inexpensive treatment, the baby’s temperature rose to 36.7°C (about 98°F) and he began opening his eyes and taking his mother’s breast. We repeated the treatment the next morning, and this time, after two hours of skin-to-skin contact, the baby perked up and eagerly began to nurse. After a few days, both of Kpaktitcho’s newborns had gained weight, and the team watched with relief as the family headed back to their village.”

“Adjare delivered her first child in the Tafiré health center, about 80 kilometers (about 50 miles) from Katiola; he was a beautiful, healthy boy. She had had to take a ‘moto-taxi’ over bad roads to get from her village to Tafiré.

Six days after her delivery, Adjare was referred to us. Again she had to climb onto a moto-taxi, along with her aunt, who would take care of her during her hospital stay. She had persistent abnormal postpartum bleeding and very severe anemia. The tests done when she arrived showed that she had contracted malaria, on top of a severe uterine infection and sickle cell crisis (a genetic disease causing an abnormality in the hemoglobin contained in red blood cells).

Adjare is Fulani, and the custom in that community is for pregnant women to live on milk and cereal during their pregnancy. Such a nutrient-poor diet makes it easier for anemia to develop. Malaria—which is endemic in Ivory Coast—further exacerbates the situation, and, for some women, sickle cell disease adds yet another complication. Adjare stayed in the hospital for several days getting treated with antibiotics. Without them she would have died from what, in the old days, used to be called ‘childbed fever.’ We treated her malaria and fed her a balanced diet. We also gave her a transfusion. She was then able leave with her baby and her aunt—again by ‘moto’—and go back to her village.”

Hours of Travel to Reach the Maternity Center

“But not all stories turn out so well. I remember one woman whose babies we couldn’t save, despite all our efforts. Often, patients are sent to us from health centers far away. In some cases, these soon-to-be mothers had already traveled many kilometers just to get to the health center. There’s hardly any transportation available at night; the roads are bad and there aren’t any lights. Travel is dangerous.

Even if they’re having contractions and have gone into labor, mothers often wait until daybreak to go to a health care facility. And if there are complications, the results can be tragic. Early in her pregnancy, Hatichitcho had had two visits with a midwife. But she had had to deliver by Caesarean section twice in the past, which meant that she should have had more regular follow-up and her delivery should have been scheduled at an appropriate facility.

Yet Hatichitcho did not go back to the midwife, and nothing had been prepared. At the health center, her baby, who was fairly big, presented in breech position. So they sent her to the hospital for a Caesarean section to prevent her uterus from rupturing. Sadly, it took too long to get here, and the baby was dead by the time they arrived in Katiola. Hatichitcho was quickly prepped for surgery. No one dared tell her, right away, that her child was dead—neither the staff nor the family that came with her. We had to tell her the sad truth the next morning, and [help her] cope with her grief. She left the hospital after a few days, with no medical complications and with very strict recommendations for her next pregnancy.” 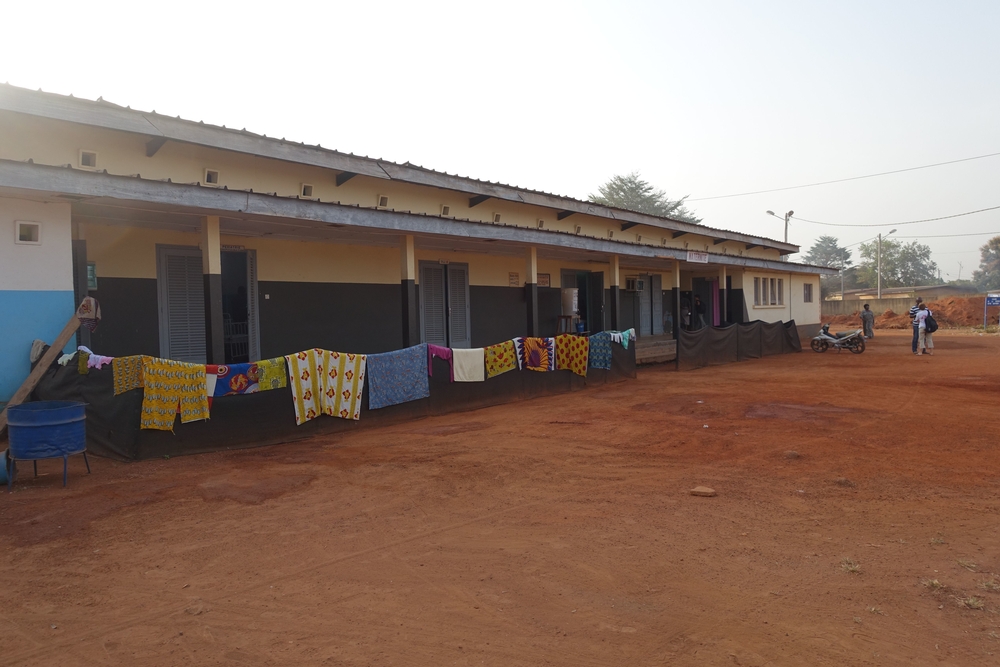 In collaboration with the Ivorian Ministry of Health, MSF began its mother and child health activities on July 4, 2014, at the regional hospital in Katiola, a town 55 kilometers (around 34 miles) north of Bouaké in the central region of Hambol. The project’s objective is to offer support and high-quality care to pregnant women and their newborns. MSF treats gynecologic, obstetric, and neonatal emergencies. In November 2014, MSF medical teams performed 170 deliveries, 19 by Caesarean section.

In collaboration with the Ivorian Ministry of Health , MSF began operations July 4, 2014 in the Regional Hospital of Katiola , a town located 55 km north of Bouaké, in the central region Hambol . The project objective is to support pregnant women and newborns with quality care. MSF supports gynecological emergency obstetric and neonatal . In November 2014, the medical teams attended 170 deliveries , including 19 caesarean .
Bernard Guillon/MSF