Though it appears the worst of the fighting has passed, the consequences are still being felt in western Ivory Coast. 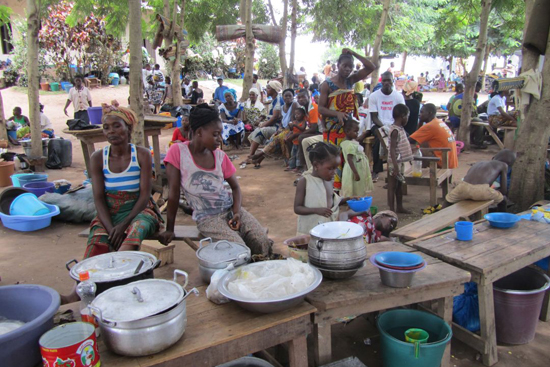 Families gathered at the displacement camp in Guiglo.

"We left the village on February 28,” Honorine says. The fighting in western Ivory Coast had drawn close to their home, near Toulepleu, and she and her family decided they had no other choice. “We spent two weeks in the brush and then walked for 10 days to get here, to Guiglo. We came with the entire family, 28 people."

Since arriving in Guiglo, Honorine has not left the displaced persons' camp that sits behind the Notre-Dame de Nazareth church. Honorine’s parents, her children, even her sister-in-law and her seven-month-old twins, are sleeping outdoors. But for the time being, the family does not expect to return home any time soon. "If everything is okay, we'll go back," says Honorine. "But our house burned, so…."

Many families like Honorine’s have taken refuge in this camp in Guiglo and the one in Duekoué, 30 kilometers [18 miles] away. The worst of the fighting that broke out earlier this year ended in late March, several days before the fall of the regime of Laurent Gbagbo, the former president whose refusal to accept his electoral defeat trigged the violence in the first place.

The normal pace of life has returned in most of the towns in the region, but deserted villages and burned-out homes show evidence of what happened in this area, and many fear that violence could start anew. “People are still afraid," says a manager at the Duekoué camp.

Approximately 15,000 people have settled there. Others are living with families in the area. Still others are hiding in the bush. The rainy season has just started as well, bringing malaria with it. Many mothers have been taking their children—the first to be affected by the illness—to the clinic that MSF opened in early January in the Duekoué camp.

Between January and April, MSF held more than 13,300 general medical visits. Serious cases, such as children with severe anemia with malaria, are sent to the Duekoué general hospital, where MSF reopened the operating room and the pediatric and maternity units. The MSF team working in Guiglo and neighboring villages also refers patients who need surgery or hospital treatment to the Duekoué hospital because Guiglo’s hospital was ransacked during the fighting.

"Many of the medical facilities in the western part of the country are not functioning because health care staff has not returned to work and because they lack medicine," says Xavier Simon, MSF's head of mission. "That is why we are providing health care in areas where access remains difficult."

Mobile MSF teams are providing care in villages near Toulepleu, Bloléquin, Bin-Houyé and others. However, after hiding for so long, many patients arrive too late to be treated. Children suffering from severe anemia, a complication of malaria, is a particular problem. When the teams encounter patients in serious condition in the area along the Liberian border, they transfer them to the Bin Houyé hospital, which MSF is supporting, and hope they get the treatment they need in time.