Two months after the massive earthquake and tsunami hit northeast Japan, MSF psychologists are continuing to work with survivors. 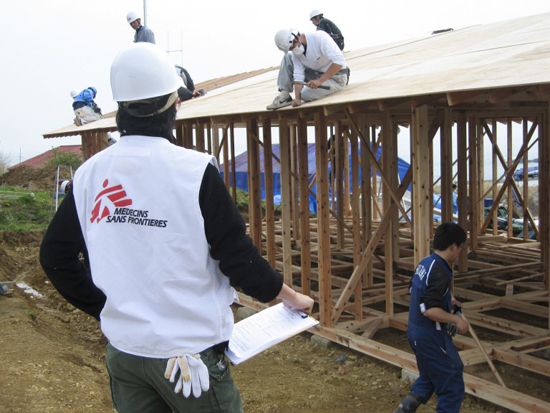 MSF staff supervise construction of a temporary shelter by local evacuees at Baba-Nakayama.

Two months after a massive earthquake and tsunami hit northeast Japan, a team of Doctors Without Borders/Médecins Sans Frontières (MSF) Japanese psychologists are continuing to work with survivors as government-led recovery efforts expand across the region.

MSF has also designed, provided materials for, and managed the construction of a temporary housing shelter for 30 people in Baba-Nakayama in Miyagi prefecture. Completed May 4, the temporary shelter will alleviate overcrowded conditions at the town’s main center, thereby strengthening infection control and decreasing stress-related disorders among evacuees.

During the planning phase, many evacuees expressed a strong desire to be involved in the construction of the center. When building got underway, 25 local people took part—workers at the site were provided with safety gear and supervised by MSF staff—and the facility was completed well ahead of the original schedule.

“There was a very positive atmosphere at the building site, with a lot of laughter and smiles among the workers, many of whom have been living in tents, cars, or half-destroyed houses due to overcrowding at the evacuations centers,” said Yozo Kawabe, the MSF logistician in charge of the project.

“They were really happy to play a hands-on role in the construction activities and the whole process was very therapeutic psychologically because these survivors of the disaster could unite towards a common goal and regain a sense of self-reliance.”

Medical authorities have requested that MSF continue to provide the three doctors currently supporting local clinics in the area. However, as the local medical infrastructure stabilizes, MSF is shifting the focus of its intervention towards providing psychological assistance to particularly vulnerable survivors of the disaster, including elderly evacuees, single parents, and those with physical disabilities and chronic diseases.

The team of six national psychologists is also providing educational activities at an evacuation facility in Minami Sanriku to help survivors living in the center identify those in need of psychological support and individual treatment. An open booth provides information on mechanisms for coping with stress, recognizing mental health issues, and finding additional assistance. Specialized information tailored for parents and evacuees taking care of the elderly is also available.

MSF established a café at the Bayside Arena Clinic in Minami Sanriku to function as a space where evacuees can interact with MSF staff directly in a less formal, more social environment. This provides opportunities to meet the population directly, build trust, and identify vulnerable cases for further referral and therapeutic treatment.

“Most people lost everything in the disaster, including family, colleagues, and friends, and the future is difficult to imagine,” said Ha Young Lee, a Korean psychologist who has previously worked with MSF in Indonesia following the Asian tsunami in 2005 and with North Korean refugees in Seoul. “Many of the evacuees are depressed and feel helpless, and many are also going through a mourning process while coping with living in particularly challenging physical circumstances.”

As the initial shock of the disaster recedes, families must now address the process of moving forward and dealing with relocation and financial issues. “The need for psychological services is only going to increase in the months ahead as survivors begin to face the challenges of rebuilding their lives,” Ha Young added. “They are already vulnerable and deeply emotionally traumatized, and stressful issues related to compensation and relocation are likely to trigger more serious mental health problems that need to be addressed.”