A team of six MSF psychologists have started working with the survivors of the massive earthquake and tsunami that hit northeast Japan on March 11. 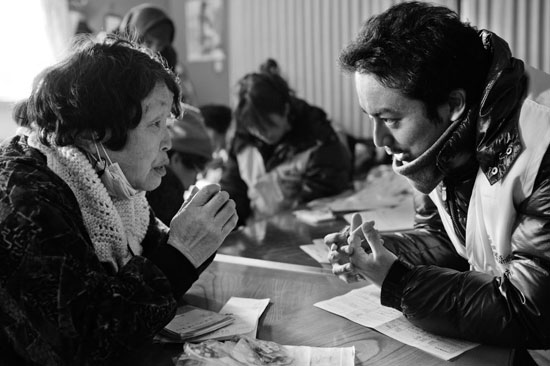 An MSF staff member provides a consult to a patient during a mobile clinic at an evacuation center in Minami Sanriku.

A team of six Doctors Without Borders/Médecins Sans Frontières (MSF) Japanese psychologists have started working with the survivors of the massive earthquake and tsunami that hit the northeast of the country on March 11.

MSF sent a team to the area the day after the quake and tsunami flattened coastal areas in the northeast, and has continued to work in the area since then.

Using small, highly mobile teams, MSF identified pockets of people whom the massive national aid effort had not yet reached and started running mobile clinics. The main medical issues addressed by 12-person MSF team have been the care of chronic diseases for people who had their treatment interrupted by the devastating natural disaster.

While running the mobile clinics in Minami Sanriku in Miyagi prefecture and Taro in Iwate prefecture, an assessment determined that while health needs were largely being met by national actors, psychological assistance was an area in which MSF could offer increased assistance.

“Although some people have their own coping mechanisms and can deal with the situation in which they find themselves, others find it very difficult to cope,” said Ha Young Lee, the coordinator of the MSF psychological team that arrived in the area Tuesday. “People can have intrusive memories of the event, flashbacks, nightmares. People can withdraw and not want to communicate. Some people will not be able to sleep, to eat. And all of these things can make them very different than they used to be and can cause significant suffering."

Ha Young worked with MSF in the aftermath of the Asian tsunami in Banda Aceh in 2005, as well as with North Korean refugees in Seoul. She will be managing a team of six psychologists from the Japanese Association of Certified Clinical Psychologists.

Initially, the team plans to focus their activities on children and elderly people. The team that arrived Tuesday will stay for between two and three weeks.

“Children are particularly vulnerable," said Ha Young. "It can be difficult for them to understand what is going on. They have limited space where they can freely express their emotions. They have lost the space to learn and play."

“We will see what kind of coping mechanisms have already been put into place by the communities themselves and base our activities around that,” Ha Young added.

Starting the day after the earthquake, MSF has conducted more than 1,000 medical consultations with patients. The majority of them have been over 60 years old, and the main issues seen have been hypertension and upper respiratory tract infections.

MSF will continue to assess the situation in the areas in Miyagi and Iwate prefectures in which it is working and adapt its activities according to needs as they evolve.