Journeys of Life and Death: Rohingya Refugees Share Their Stories

More than 688,000 Rohingya refugees have arrived in Cox's Bazar, a district in southeastern Bangladesh, since late August 2017 after fleeing a campaign of targeted violence and persecution in Rakhine state, Myanmar. They join hundreds of thousands more ethnic Rohingya who had made the same journey during previous crises. The Rohingya, a predominantly Muslim minority denied citizenship and other rights in Myanmar, have settled in existing camps as well as in new makeshift settlements established by Bangladeshi authorities. Here, three Rohingya people share their stories in their own words.

A Journey of Life and Death 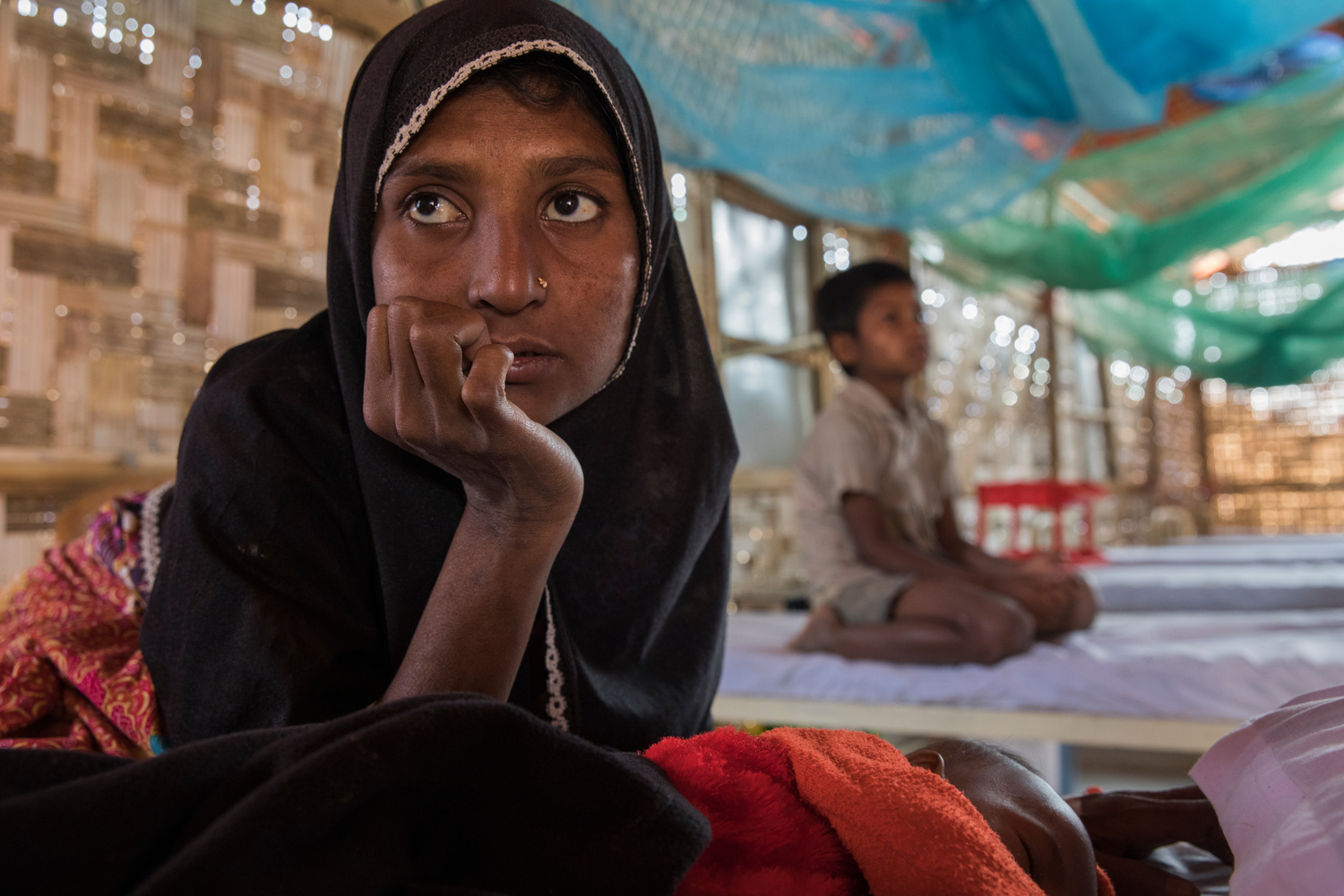 Humaira is a 25-year-old Rohingya refugee from Maungdaw district in Rakhine state. She arrived in Bangladesh in October 2017 after the violence reached her hometown. In late January 2018, she was found in a state of shock by a Doctors Without Borders/Médecins Sans Frontières (MSF) outreach team in the Jamtoli makeshift settlement. Humaira was brought to MSF’s primary health care center in Jamtoli, where she is receiving rehydration treatment.

She is accompanied by her seven-year-old son, Mohammed Faisal, and a three-and-a-half-month-old baby girl, Ruzina, who doctors say is malnourished and weak. Humaira hasn’t been able to breastfeed her daughter since she was born. If the MSF team cannot help her start breastfeeding, they say Ruzina may have to be given infant formula. Mohammed Faisal has been looking after his baby sister, feeding her with chips softened in water.

“When the violence broke out, my husband was taken by the Myanmar military. I don’t know whether he is dead or alive. They took us from our homes, burned them to the ground, and beat us very badly.

When we fled, I was already heavily pregnant. I left with my son and another woman, but lost contact with her during the journey. I couldn’t take any belongings with me.

We walked for several days through the forest. We were starving and only survived by eating the leaves of the trees. We slept in the bush. We finally reached the riverside and boarded a boat that would take us to Bangladesh.

My baby, Ruzina, was born on the river. I went into labor while already on board [the boat], and the whole process lasted for three hours.

The boatmen and another woman who was there helped me through it. Throughout the journey I felt bad—it was so hard. I thought only about giving birth to my child and getting her away from the violence. I thought of fleeing as far away as I could, and I believed only in Allah.

After we reached Shah Porir Dwip [at the southern point of the Cox’s Bazar peninsula] we were taken by bus to Jamtoli settlement. I was given a tent to live in with my two children. I was unable to build it, but some villagers helped me with this.

“All the food I get in the settlement is found by my boy, Mohammed Faisal. He goes to school and plays football in the afternoon. He washes his sister’s clothes and fetches water. When we fled, I was already heavily pregnant. My baby, Ruzina, was born on the river. I went into labor while already on board [the boat], and the whole process lasted for three hours. ••••• The boatmen and another woman who was there helped me through it. Throughout the journey I felt bad—it was so hard. I thought only about giving birth to my child and getting her away from the violence. I thought of fleeing as far away as I could, and I believed only in Allah.” Humaira, 25, living in Jamtoli makeshift settlement. Photo: @surianna ••••• #standwithrefugees #forcedfromhome #bangladesh #doctorswithoutborders #coxsbazar #journey #birth #refugees #myanmar #rohingya

After a month in Jamtoli I started to get some [humanitarian] relief. But I never have enough to eat and because of that I can’t breastfeed my baby. I felt sick in the beginning. I can’t sit down properly and can’t do some things due to the pain I feel in my body.

All the food I get in the settlement is found by my boy [Mohammed Faisal]. He goes to school and plays football in the afternoon. He washes his sister’s clothes and fetches water. I have hope that he will help me through all the difficulties of the future. 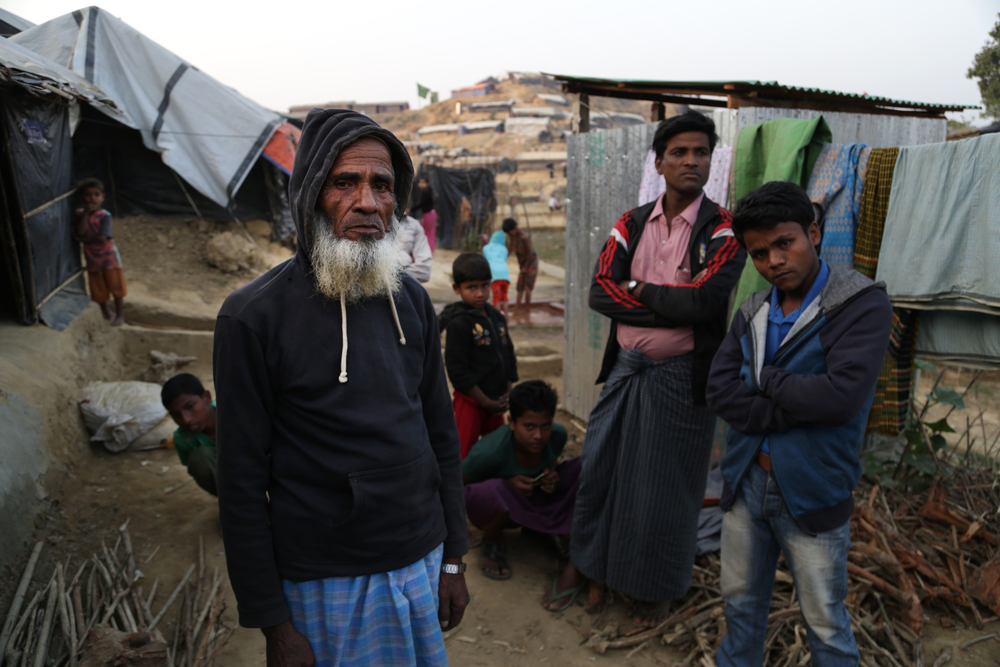 Ali Ahmed is an 80-year-old Rohingya refugee living in the Jamtoli makeshift settlement. He is from a town with about 5,000 homes in Buthidaung district, Rakhine state. Ali Ahmed arrived in Bangladesh in the first week of September 2017.

This is the third time in the last four decades that he has been a refugee in Bangladesh. He has sought refuge in three different camps, living as a refugee for more than six years in total, and has returned to Myanmar twice before. He had six sons and one daughter; two of his sons were born during earlier periods of displacement in Bangladesh, and two of his sons were killed during the recent wave of violence against the Rohingya in 2017. His wife has passed away.

When he was a young man, Ali spent seven years working as a cook in a hotel in Rangoon (now Yangon). He eventually returned to Rakhine because he missed his family.

It was February 1978; I was 40 years old. My family were beaten and tortured.  I fled with my wife and two children. On the way I lost some old photos from my time in Rangoon. I was very fond of them, but they fell into the river during our journey.

Once in Bangladesh, we stayed in a settlement in Ukhia. After three years we were sent back to the same area of Buthidaung [in Myanmar]. We were brought by bus and boat. After reaching our home town, we rebuilt our house in the same plot where the previous one had been destroyed. We made it with wood, with four rooms.

We started cultivating the land around it. We lived there for some time peacefully, but gradually problems reappeared: our cows were sometimes stolen and we were often arrested.

In 1991, it started to get a lot worse again and we decided to leave. I had been doing forced labor for four years. The army chose me because I spoke a bit of Burmese. I left my village with my wife, two sons, their wives, and one grandson.

It took us seven days to reach Bangladesh. We lived for four days in the forest as we made our way to the shores of the Naf river. After three more days we reached Bangladesh and, this time, ended up in Kutupalong.

A larger part of my family remained displaced in different parts of Rakhine. I lost contact with them until I went home again in 1994. Life in Kutupalong was acceptable. There were about 18,000 people in the camp.

I was happy to return [to Myanmar] in the beginning, but after some years, in 2002, we were being arrested and beaten frequently. We were not allowed to travel, we couldn’t even go three kilometers from home.

Every day there was more bad news. I thought of going back again to Bangladesh so many times. After some violent events of 2014, we started to think we should leave again. We thought: we don’t belong here.

In the recent violence, my house was burned and two of my children were killed. Now there are nine of us here in Jamtoli, including four sons and a daughter. We don’t face any major problems in Bangladesh, but conditions will get worse with the arrival of the rains. We won’t be able to move from one place to another. It will be slippery. We are not afraid of going back to Myanmar, but we want our rights to be respected. 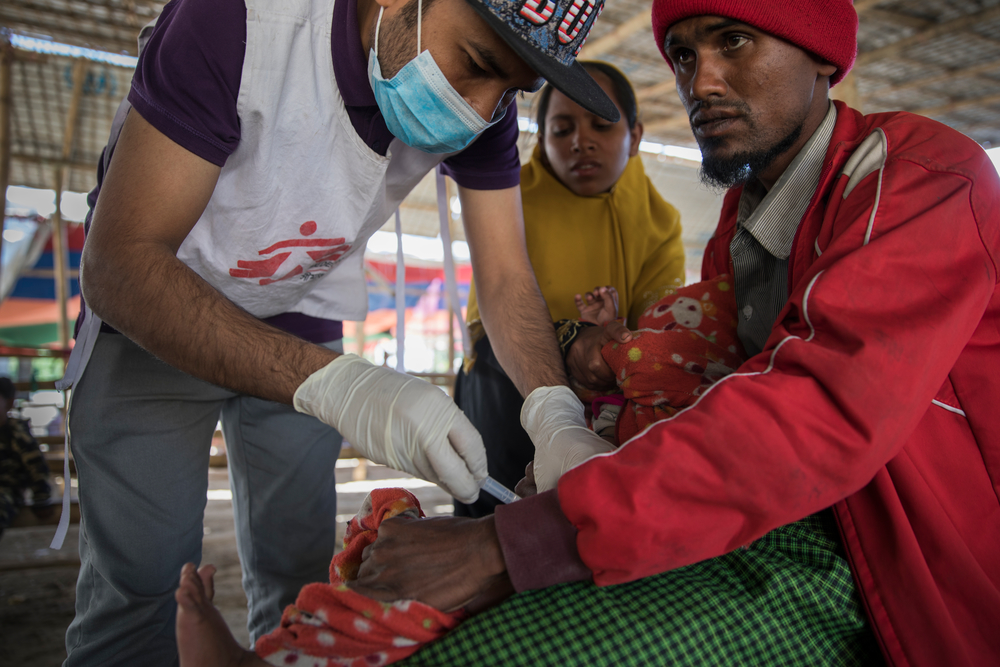 Boshir Ullah is a 25-year-old refugee who recently arrived in Bangladesh from Myanmar. He reached the Bangladeshi shore on January 28, 2018, more than five months after the latest exodus of Rohingya refugees started at the end of August.

Boshir is from a village with about 50 homes in Buthidaung district. He arrived in Bangladesh with his 20-year-old wife, Sundara, his 60-year-old mother, Dutu, and three small children, Hussain Ara (three), Bushera (five), and Ferungada (one). A day after they arrived, the family reached the Sabrang entry point at the south of the peninsula, where an MSF team does nutritional screening of children, checks the medical condition of new arrivals, and carries out vaccinations.

That day, 41 people arrived at Sabrang in different groups after a week with no new arrivals. Some of them said that between 1,000 and 1,200 others were waiting to catch a boat across the Naf river. In the days that followed, several hundred more people arrived in Bangladesh.

I hoped that the violence would be over one day. I was waiting for good news that never arrived. I waited for one month, two months . . . but the situation didn’t change, so we decided to flee.

If the military saw me I would be beaten. They used us as forced labor. I only was allowed to stay in one place. The military arrested people without providing any reason.

I didn’t sleep for the last eight days. Around 500 people were living in my village. Some of them are already in Bangladesh. Others are trying to sell belongings to get some money and come. People are desperate to get away.

I didn’t have any relatives in Bangladesh and had never been here before. My two aunts and grandfather are still in Myanmar. They wanted to come but they can’t, because first they need to sell their cows and goats to get the necessary money. We didn’t have any choice but to leave . . . I didn’t want to stay any longer.

Before taking a boat, we waited for two days in the forest and after that we reached the shore of the river. We had to pay 40,000 kyat each (about $30) to come here. We left all our belongings at home. We don’t have any big health problems, but the journey was very hard.