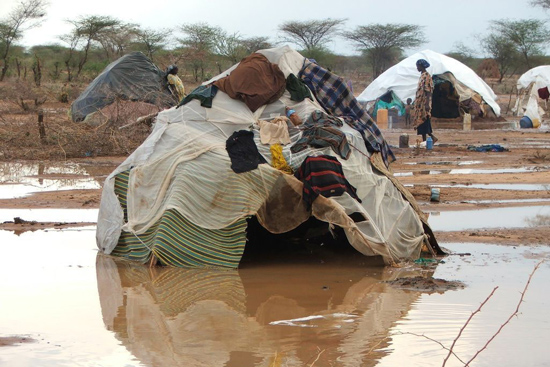 A shelter is flooded in the overcrowded Dagahaley refugee camp in Dadaab.

With the rainy season underway, the situation for the refugees has become even more precarious. MSF urgently calls upon the Kenyan authorities and aid agencies to reach an agreement to ensure appropriate humanitarian assistance.

There are at least 3,000 people in the makeshift settlements. Heavy rains over the past 48 hours have flooded the area where the families are settled, worsening the already harsh living conditions for those who could not find shelter inside the refugee camp.

“Hundreds of families have been living in makeshift shelters in a no man’s land over the past four months, waiting to be relocated to a proper camp,” said Joke Van Peteghem, MSF’s head of mission in Kenya. “These refugees are in dire need of assistance given the hardships they have endured. With the onset of the rainy season, we must act now.”

Each month, thousands of refugees, many of them women and children fleeing the war in Somalia, cross the Kenyan border after an often treacherous journey on foot. Today, they face alarming shortages of food, water, sanitation, and adequate shelter; the refugee camp is severely overcrowded and cannot accept them.  Although a site has been identified for newer refugees, relocation to the site has been delayed.

In response, MSF has carried out rapid medical screenings of the refugees, referring people in need of medical care to health facilities. MSF also provided shelter materials to the 700 families, and, together with other agencies, ensured the supply of water.

“We are at a dead end,” said Van Peteghem. “While we have distributed plastic sheeting to the new refugee families, it is far from enough, especially now that the rainy season has started. We call on the Kenyan authorities and aid actors to immediately facilitate their relocation to suitable accommodation.”

Dagahaley is one of three camps in Dadaab, Kenya, that were set up in the early 1990s to house Somali refugees. Camps that had originally been built to accommodate 90,000 people are today struggling to cope with close to 300,000 inhabitants. MSF started to work in Dagahaley camp in March 2009, operating a 100-bed hospital with surgical and maternal health services. More than 600 patients are admitted per month. Four MSF health centers provide vaccinations, antenatal care, and mental healthcare, with an average of 10,000 patient consultations per month.