Kenya: Humanitarian Crisis on the Outskirts of Overcrowded Dadaab Camp

MSF has found alarmingly high rates of malnutrition among the Somali refugees arriving and settling on the outskirts of the Dadaab refugee camp in northeastern Kenya. 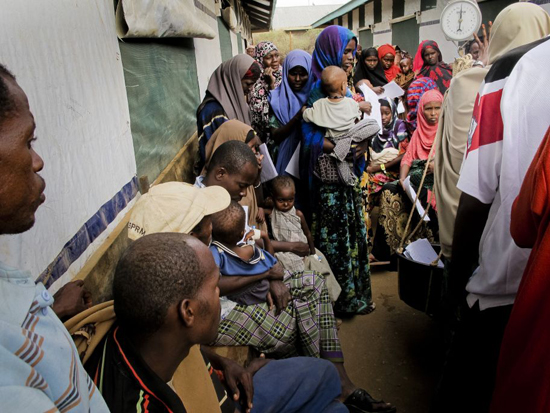 Parents wait for their children to receive treatment for malnutrition in MSF's hospital in Dagahaley camp in Dadaab.

Doctors Without Borders/Médecins Sans Frontières (MSF) has found alarmingly high rates of malnutrition among the Somali refugees arriving and settling on the outskirts of the Dadaab refugee camp in northeastern Kenya. The findings have prompted MSF to reinforce its medical intervention there.

The Dadaab refugee camp complex in northeastern Kenya consists of three camps: Ifo, Hagadera and Dagahaley. The complex constitutes the largest refugee camp in the world, and it is beyond full. Originally built to house 90,000 people, the camps now house nearly 400,000 people. Nevertheless, thousands of Somali refugees continue to arrive every day, fleeing the violent conflict in their home country—and devastating effects of ongoing drought and lack of food.

When they arrive in Dadaab, exhausted after several days or weeks of travel, new arrivals receive inadequate assistance. Because there is no room for them, they must construct and settle in makeshift shelters on the outskirts of the camp. Despite the fact that Doctors Without Borders/Médecins Sans Frontières (MSF) has repeatedly asked for a solution to relieve pressure on the overcrowded Dadaab camps, no sufficient action has been taken.

Their situation has been made even worse by the severe drought affecting the Horn of Africa. MSF has found alarmingly high rates of malnutrition among the Somali refugees arriving and settling on the outskirts of the Dadaab camp, prompting MSF to reinforce its medical intervention there.

MSF teams are currently providing medical care to the 113,000 residents of Dagahaley camp, where an average of 500 additional people arrive every day. Some 25,000 people are living on the outskirts of the overcrowded site, and this figure is expected to keep growing. Beginning earlier this year, MSF teams have also been providing assistance to new arrivals on the outskirts of Ifo camp. Teams have been waiting for the planned extension, called Ifo 2, to open and enable the scale-up of activities.

At the beginning of June 2011, a new reception center was established in Dagahaley, to be managed by the Kenyan authorities and the United Nations’s agency for refugees (UNHCR), with the aim of improving assistance for new arrivals.

Every day, an MSF team assessed the health of people arriving at the center. Teams carried out systematic nutritional screenings of children five years of age and younger with the use of the MUAC, a tool that measures a child’s middle upper arm circumference.  The team found alarming malnutrition rates, so decided to conduct a rapid nutritional assessment in the area in mid-June. The results of the assessment exceeded the team’s worst fears.

A mixture of extreme heat, a lack of water and sanitation, and delays in the registration of new arrivals—which in turn delays the provision of food rations—have resulted in extremely difficult living conditions for new arrivals. During the three-day rapid nutritional assessment, the MSF team measured and weighed some 500 children between six months and five years old. As many as 37.7 percent of the children were suffering from global acute malnutrition; of these, 17.5 percent were severely malnourished and at high risk of death. Children up to 10 years old were also showing elevated rates of malnutrition.

“There is a high level of malnutrition. We are extremely concerned," said Monica Rull, head of MSF projects in Kenya and Somalia.

"I expected to find a difficult situation, but not a catastrophic one," said Anita Sackl, coordinator of the nutritional assessment. "The majority of new arrivals actually fled [Somalia] because they had nothing to eat—not just because their country has been at war for decades.”

Because of these worrying results, MSF is now including children older than five in their nutritional programs in Dagahaley camp.

The ongoing delay in providing humanitarian aid is deeply problematic. The refugees must wait 40 days before being officially registered by the UNHCR and receiving a card entitling them to the regular food distributions. During those 40 days, they received intermittent food rations and a five-liter plastic container for water.

Since the beginning of July, newly arrived refugees have received food for at least receive food for 15 days, but it is not enough. “The World Food Program (WFP) must ensure more regular food distributions, and a nutritional survey for all the Dadaab camps needs to be carried out," said Monica Rull. "Children up to 10 years old should also be included in order to confirm malnutrition rates in older children and thus adapt the nutritional programs."

MSF is also calling for an accelerated registration procedure. Currently, there is only one registration center, in Ifo camp, for the entire Dadaab complex.

In areas on the outskirts of Dagahaley, MSF found that some refugees were receiving less than three liters of water per day—barely enough for one day’s drinking water in hot climates, but hardly enough for basic hygiene practices. The water supply must be increased. MSF teams have begun distributing more than 100 cubic meters (98 tons) of water by truck every day.

The MSF Medical Program Is Expanding

Pressure is mounting in the hospital run by MSF in Dagahaley camp, and in the five health posts MSF operates. More than 1,600 children with severe acute malnutrition are currently receiving treatment in the ambulatory programs, and more than 700 new admissions are reported each week in the supplementary feeding programs.

The staff has been registering an average of 107 new patient admissions to intensive nutritional care every week at the hospital. An extension with 60 additional beds for pediatric cases has been added to the facility, which was already operating beyond its capacity.

MSF has been providing medical care in Kenya since 1992, and has worked in the camps at Dadaab for a total of 14 years. Since 2009, MSF has been the sole provider of medical services in Dagahaley camp, providing a 170-bed general hospital and five health posts to supply healthcare to the camp’s 113,000 residents.