A move to relocate Somali refugees from Kenyan cities to already overcrowded refugee camps nearer the border with Somalia would make an already miserable situation even worse. 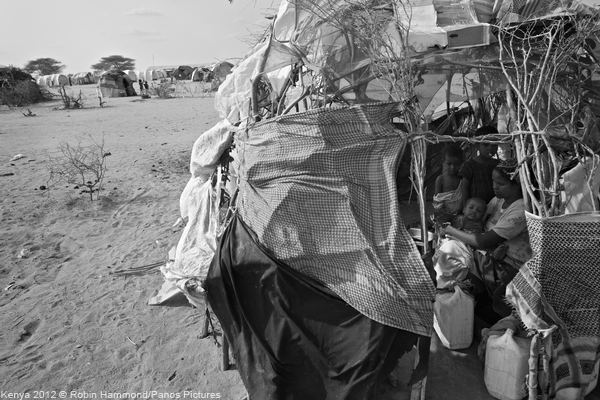 Family members huddle in a makeshift shelter on the outskirts of the overcrowded Dadaab refugee camps.

Kenyan authorities recently publicly exhorted thousands of Somali refugees living in urban areas of Kenya to uproot and move to refugee camps in Dadaab, a sprawling complex in a vast desert landscape in eastern Kenya. The camps, which together comprise the largest refugee settlement in the world, are already home to close to half a million people, well beyond their original capacity of 90,000. Squalid living conditions and insufficient assistance have been compounded by increasing insecurity in the camps over the last year.

“The assistance provided in Dadaab is already completely overstretched and cannot meet existing needs,” said Dr. Elena Velilla, MSF’s head of mission in Kenya. “In the event of an influx of new arrivals, MSF would not be able to increase its assistance or respond to a new emergency due to ongoing insecurity.”

The possible arrival of thousands of additional refugees will further deteriorate the precarious conditions, already worsened by seasonal rains and an attendant increased risk of epidemics. There are already sporadic cases of cholera and hepatitis E reported throughout the camps.

MSF, one of the main health providers in Dadaab, is operating a 200-bed hospital serving as a referral facility for the camps, but it has struggled to cope with the considerable and growing medical and humanitarian needs.

“Since the beginning of December, heavy rains have flooded the camps, and the already fragile shelter and sanitation conditions have become even more deplorable, with dramatic consequences for the population’s health,” said Velilla.

Over the last month, the number of children admitted to the MSF hospital for severe acute malnutrition has doubled, with approximately 300 children hospitalized. Most of them are also suffering from acute watery diarrhoea or severe respiratory tract infections, attributable to the poor living conditions in the camps.

Since the camps were established more than 20 years ago, emergencies have plagued Dadaab, with floods, nutritional crises, and disease outbreaks occurring regularly. According to the United Nations High Commissioner for Refugees (UNHCR), which administers the camp complex, 11 epidemic outbreaks were reported in 2012.

MSF operates a hospital in Dagahaley, one of the five refugee camps in Dadaab. Medical teams carry out an average of 14,000 outpatient medical consultations each month and admit 1,000 patients from the refugee and host communities to the hospital. There are currently more than 400 severely malnourished children enrolled in the nutrition program, 63 of whom were admitted to the intensive care unit this week due to medical complications.

In October 2011, two MSF aid workers, Montserrat Serra and Blanca Thiebaut, were abducted in Dadaab while providing emergency assistance to the Somali population. They remain in captivity in Somalia. While MSF continues to respond to acute crises in Somalia, it has suspended the opening of any non-emergency projects in the country until Montserrat and Blanca are released.