Letter from North Afghanistan: "This Is Life and Death Under a Magnifying Glass" 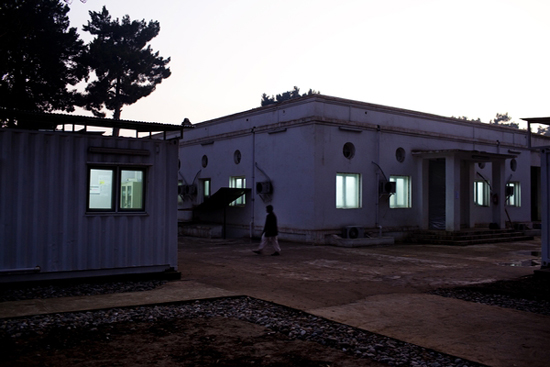 The grounds the MSF hospital in Kunduz, Afghanistan, seen at dusk

Nurse Brett Adamson recently completed a six-month mission in Kunduz, Afghanistan, where Doctors Without Borders/Médecins Sans Frontières (MSF) runs a hospital providing emergency surgery to people with life-threatening injuries. Below is some of what he wrote while he was there:

Today we watched a child die. We had done all that we could, but there are always limits. He was hit by a speeding motorcycle, cracking his skull.

We are in Afghanistan, in the north, running a trauma center. We—myself and another 19 international staff—work alongside some 150 Afghan staff. This specialized surgical hospital includes an emergency unit, an operating theater, male and female surgical wards, and an intensive care unit. We have X-ray facilities, ventilation, full cardiac monitoring, infusion pumps, mechanical suctioning, and oxygen.

The child was hooked up to a ventilation machine. We have four in our intensive care unit and they have saved many lives—of people hurt in bomb blasts, wounded by gun shots, or with head traumas. We kept the child alive to see if he might recover—buying time for healing, for the family to pray, for us to hope. Unfortunately he didn’t make it, but thankfully the majority do.

We don’t take sides; we care for people on all sides of this war. For neighbors shot for cutting down a tree; for children shot for being in the wrong place at the wrong time; for people injured by a blast while going down the street for bread; for entire families who have had grenades thrown at them. We also treat victims of domestic violence, children with burns, and lots of people injured in road accidents.

Occasionally it all happens at once. There might be 10 people injured in a car crash, 15 hurt by a bomb blast, or 50 wounded by gunfire. When this happens, the whole team works well into the night.

This child was hit by a speeding motorcycle. His family is present when I turn off the ventilator and pull the tube from his lips to see if he can breathe on his own. We have talked with them many times about his extremely poor chances of survival. If a child stops breathing, we know the bleeding or swelling inside the head has progressed to the point that almost all brain function has been lost.

The boy cannot keep breathing on his own. His bed is surrounded by people—his family, two doctors, a nurse, the nurse from the morning shift who has stayed on—all eager to do anything possible for the dying child. The child is gasping for breath, so we relieve his distress with drugs; a push on a syringe eases his suffering. Family members hold his hand, a nurse washes his face.

This is life and death under a magnifying glass. The boy gasps occasionally and again we settle him, his heart rate nearly stopping between each gasp. Family members ritually trickle a tiny amount of water into his lips. We suction his mouth and we comfort the family. Eventually he slips away.

We wash him, dress him, tie his jaw closed and his toes together, and wrap him in a clean sheet. A brother sheds tears.

The family wants to take him now. The father thanks us for our efforts, wraps his child in a blanket and carries him outside to an old station wagon borrowed from a friend. I hold his child for him as he climbs into the back. I pass him the child and he cradles him and they drive away to their home in the mountains.

We clean the bed, clean the equipment and attend to the other patients. Then we make up the bed with fresh sheets, and within a couple of hours it is filled with someone new.